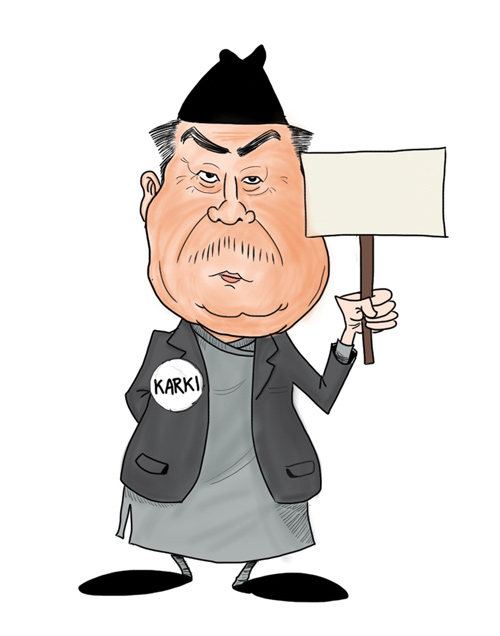 This week, the Supreme Court ruled on the most eagerly awaited case concerning the legality of the suspended Chief of the Commission for the Investigation of the Abuse of Authority (CIAA) Lokman Singh Karki to hold office. It declared that he had neither the moral character nor qualifications for the post.

The verdict on Sunday not only declared Karki ineligible for the post, but exposed how arbitrarily heads of constitutional bodies are appointed in this country. It showed the power of the hidden hand that leaned on the political leadership in 2013 to push Karki’s appointment despite the initial reluctance of President Ram Baran Yadav to endorse it.

The Supreme Court has stepped in to prompt questions about Nepal’s leaders who unanimously proposed one of the shadiest characters from the monarchy days to head the republic’s anti-corruption agency. Why was he backed so desperately despite such vociferous protests from civil society?

In 2013 the High-level Political Mechanism led by Pushpa Kamal Dahal proposed Karki’s name out of the blue when there were plenty of more qualified candidates with reputations for integrity. The post had been vacant for several years and the leaders of all four major political parties hastily proposed Karki’s name which was mysteriously ratified by the Constitutional Council headed by the Chairman of the Council of Ministers Khil Raj Regmi, Chief Justice Damodar Prasad Sharma and three other ministers at that time.

How could two Chief Justices who had spent 80 years between them in the judiciary choose a man who lacked qualification and moral standing? Even if they accepted Karki based on the recommendation of the Mechanism they should be equally accountable for the dubious decision. President Ram Baran Yadav, who previously took the bold step of reinstating former Army Chief  Rookmangud Katwal in 2009, surprisingly endorsed Karki’s appointment.

As mentioned in the Constitution, the President cannot deny the government’s or Constitutional Court’s recommendation, but he could have taken the suggestion of legal experts and returned Karki’s appointment for reconsideration.

Thanks to young lawyer Om Prakash Aryal who dared to file a writ petition against the appointment of Karki, and relentlessly pursued the case in the Supreme Court. Karki has finally been unseated after a reign of terror lasting nearly four years.

The credit must go to Chief Justice Sushila Karki and Justices Bishwombhar Shrestha and Sapana Pradhan Malla who re-opened the hearing of the writ petition previously scrapped by the Justices Gopal Parajuli and Om Prakash Mishra.

Parajuli is next in line to become Chief Justice after Sushila Karki steps down in April. All previous decisions handed down by the Court in favour of Karki have now come under scrutiny. How can we now trust the Chief Justice and Justices who thought Karki was qualified for the post? How can the people expect justice from such Justices?

Lokman Singh Karki had violated the rule of law by overstepping the jurisdiction of the CIAA. He arbitrarily directed the cancellation of hydropower licenses, interfered in the medical education sector, and mercilessly hounded civil society activists and lawyers who opposed his appointment.

As the head of CIAA, there was an expectation that he would investigate fairly and file corruption charges against the ‘Big Fish’. But all he did was go after bureaucrats in some petty cases. Not only did he overstep his jurisdiction, he also exercised unnecessary power and acted as the executive by ordering around ministries and related departments.

On the day the Supreme Court decided to reopen the case filed against his appointment, he suddenly called a press meet and announced that the Maoist cantonment scandal was under investigation. It was significant that this happened while Prime Minister Pushpa Kamal Dahal was in India on a state visit.

Dahal retaliated by getting other political bosses to agree to file an impeachment motion in Parliament in October against Karki, automatically leading to his suspension. Political leaders were spooked that Karki may actually have evidence against them as well.

However, the leaders did not show much interest in pursuing the impeachment motion, and failed to prove that they stood for democracy and the rule of law. Even if they had chosen the wrong person, the political leadership had a chance to set things right by getting Parliament to impeach Karki. But the politicians chickened out, and it was left to the Supreme Court to do what the political parties did not dare to do.

Most investigations during Karki’s tenure had the whiff of personal vendetta, extortion and the persecution of political opponents. Questions are now being asked about what will happen to the numerous cases against individuals and institutions that he got the CIAA to investigate. The Court could set a precedent if another public interest litigation is filed.

Who will bell the cat, Binita Dahal

Get ready for the pigeon invasion.
SALIL SUBEDI

The early results of the 2001 census: our population is growing and moving.
HEMLATA RAI

A typo has cost a Norwegian-Nepali joint-venture for BPC its Rs730 million bid.
BINOD BHATTARAI
Wow! It namely likewise fine treatise about JavaScript, babyliss pro curler I dissimilar Your post doesn't acquaint any sense. ray ban outlet uk if information are defined surrounded sketches one can effortlessly be versed with these. hollister sale I think a visualized exhibit can be better subsequently simply a effortless text, chanel espadrilles for sale that why it gives you improved quality. getnjloan.com Can you amuse forward me the code for this script alternatively interest distinguish me surrounded detail among relation apt this script? Vivienne Westwood online get a babyliss perfect curl Very soon this network sheet longing be outstanding among all blog viewers, isabel marant sneakers saleI too prefer Flash,