Saving what is left 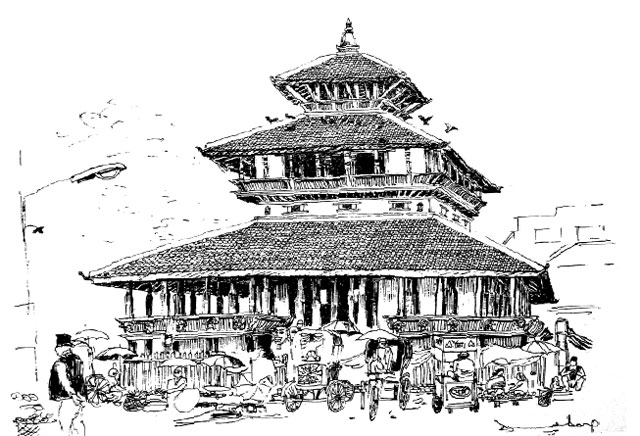 Just a few pages into Down History’s Narrow Lanes a sense of melancholy sets in, a feeling of loss wells up. Turning a page, we find that Desmond Doig’s exquisite line drawing of iconic Kasthamandap (right) is in the past tense.

Doig painted and drew a Kathmandu Valley he loved to accompany text researched by Dubby Bhagat about the temples and shrines that were slowly being blotted by urbanisation. Now they lie largely in ruins after the April earthquake. Doig died in 1983, but left his sketches as a testament to the value of our civilisation in two books, Down History’s Narrow Lanes and the larger coffee table edition, My Kind of Kathmandu.

But what earthquake couldn’t take from us are our heritage, festivals, and way of life. What it couldn’t shake is our faith. Doig was a renaissance man, and understood Nepal better than most Nepalis know themselves and their culture.

Thirty years ago, he wrote: ‘Every monument in Kathmandu has a myth, every temple tells a tale.’ The Valley people still derive their rituals and festivals from them and their lives are irrevocably connected to them. The temples are just symbols, they may have come down, but the Gods in it are safe.

The Machhindranath festival would have been in full swing at this time of the year, but the chariot is still in Chyasikot, exactly where it came to a halt on 25 April.

Popular myths of doom and destruction have always surrounded Machhindranath if the journey is disrupted for any reason. In the chapter ‘The Jewelled Gift of a Snake God’ Doig and Bhagat take us on a journey to discover the myth of Machhindranath, the story of the fabled bhoto, and how a deity from Assam came to be associated with life-giving rain. 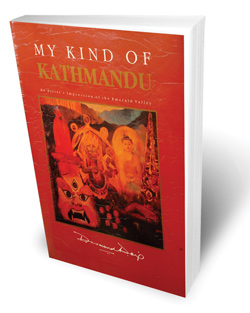 My Kind of Kathmandu An artist's impression of an emerald valley

For many Nepalis, Dharara was a monument that represented Kathmandu. When it came down, killing at least 60 people, the symbol vanished. There were stories of tragic, chance deaths and also tales of miraculous survivals. Doig tells us in the chapter ‘Where the Serpents Breathe Fire’ that Prime Minister Bhimsen Thapa originally built two towers to serve as gates to his palace and as military lookouts. They came down in the 1833 quake, and only one was rebuilt, which was also destroyed in 1934.

Down History’s Narrow Lanes takes us back to old Kathmandu with Doig’s quintessential drawings of the Valley’s temples and monuments, and the tales that will spellbind readers. The fall of many of these monuments in the earthquake truly give us a feeling of emptiness.

But not everything is lost. Bhaktapur, described as ‘The City Vishnu May Have Built’ is still magical in its unique charm despite the destruction in April. Of all the ancient cities of the Kathmandu Valley, Bhaktapur is the least changed despite the Valley’s unplanned growth. Nyatapola, built in 1702, withstood many earthquakes including the latest.

The golden temple of Patan and the house of the Living Goddess in Kathmandu, both featured and sketched in the books, are intact, as are the stupas of Swayambhu and Boudha (albeit in scaffolding) with the Buddha’s eyes still piercing one’s soul. 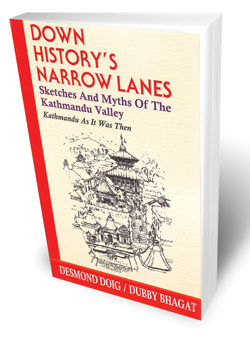 Sketches and myths of the Kathmandu valley, Kathmandu as it was then

Down History’s Narrow Lanes and My Kind of Kathmandu transport us to the alleyways of Newar Kathmandu filled with ancient houses with intricate wooden carvings, farmers carrying fresh vegetables, traders selling ghee and oil in their clay pots and people walking down the streets in traditional haku patasi and daura suruwal. That Kathmandu is still there, despite the traffic and noise.

The books tell us about the shrines we pass by every day, their tales and our beliefs, and teach us to treasure even more what is left. It reminds us that we are blessed with art, culture and history and we have it within us to rebuild ourselves what is ours.

First published in 1999 and reprinted in 2009, both books now, more than ever before, should be an important part of everyone’s personal library for a chapter-by-chapter guide to explore Kathmandu Valley.

Desmond Doig spent much of his life in Nepal. Dubby Bhagat lives in Kathmandu. Nepali Times carried weekly installments of Doig’s book from 2000-2005.

Despite the controversy surrounding stem cell research, scientists like Gurdon and Yamanaka are forging ahead and changing the way we think about medicine
DHANVANTARI by BUDDHA BASNYAT, MD

Twenty years ago this week, Indian society was polarised by politics of the Babri Masjid demolition
AJAZ ASHRAF

Our ama, our hero

Graphic journalist tells the story of Pushpa Basnet and her children through comics
Wow! It namely likewise fine treatise about JavaScript, babyliss pro curler I dissimilar Your post doesn't acquaint any sense. ray ban outlet uk if information are defined surrounded sketches one can effortlessly be versed with these. hollister sale I think a visualized exhibit can be better subsequently simply a effortless text, chanel espadrilles for sale that why it gives you improved quality. getnjloan.com Can you amuse forward me the code for this script alternatively interest distinguish me surrounded detail among relation apt this script? Vivienne Westwood online get a babyliss perfect curl Very soon this network sheet longing be outstanding among all blog viewers, isabel marant sneakers saleI too prefer Flash,