The sad saga of the Adhikari family

It was murder, not a fast-unto-death 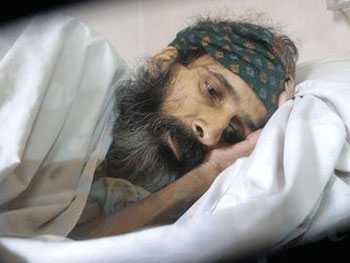 SETO PATI
Nanda Prasad Adhikari did not die while staging fast-unto-death seeking justice for his son murdered allegedly by Maoist cadre in 2004. He was murdered, by an insensitive State and political parties that want to bury the past.

A day after Nanda Prasad's death, the government tried to absolve itself of all responsibility and in a show of cowardice laid the blame on the man who cannot challenge them anymore. ‘Since Nanda Prasad rejected food and medicines prescribed by the doctors, he passed away,’ was the limp explanation. The statement went on to argue that his ‘fast-unto-death’ was irrelevant since the murder case of his son Krishna Prasad Adhikari ‘has already been registered at the Chitwan District Court’.

This was an utterly shameful and insensitive response which only added to the humiliation of the Adhikari family in its pursuit of justice. The government explanation fails to acknowledge why the Adhikari couple was compelled to carry on with their indefinite hunger strike. Under pressure from UCPN (Maoist), and in particular from Baburam Bhattarai, the government could only offer hollow and insincere assurances of prosecuting those named in the FIR. The state therefore failed in one of its primary responsibilities: protecting citizens and punishing the takers of human life.

The latest indefinite hunger strike by Nanda Prasad and his wife Ganga Maya (who is continuing with her fast and is in a critical state) started on 24 October last year. Their struggle has been going on for 10 years ever since Krishna Prasad was tortured and murdered in Chitwan in 2004. None of the 14 people named by the Adhikaris in an FIR has been tried. 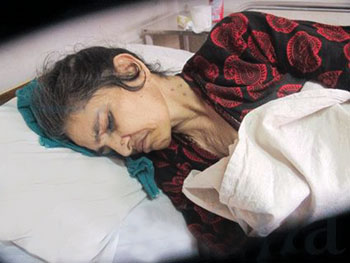 The National Human Rights Commission blames the Maoists for murdering Krishna Prasad, who had gone from his home in Gorkha to meet his grandparents in Chitwan soon after his SLC exams. After the murder, the Maoists, in their standard operating procedure, tried to give the crime a political colour, as if that would absolve their guilt. The Adhikaris have maintained that the murder was related to a family land dispute with the accused in Phujel.

The Adhikari couple first began their hunger strike in front of Prime Minister’s official residence at Baluwatar in January 2013. Bhattarai, who won the election from Gorkha, was prime minister at the time. The couple was arrested and kept in police custody for over a month. Then, in June, when Supreme Court Chief Justice Khil Raj Regmi was head of interim government, the Adhikaris were detained again and taken to a mental hospital in Lagankhel. Only a media expose forced their release.

They launched their second hunger strike the following month and ended it on 47th day after an agreement with the government, which included action on the FIR. Police arrested some accused, but after Bhattarai and his comrades issued threats, they were released. Let down, the Adhikaris resumed their hunger strike on 24 October 2014. When police arrested Parshuram Poudel, Bhattarai, went berserk on Twitter, issuing more threats. The police again released Poudel, citing lack of evidence.

Nanda Prasad was standing up against the powerful protectors of criminals and their shameless apologists and sycophants. “These things happen during times of war, what’s the big deal?” has been the the Maoist refrain throughout. The pain and trauma of survivors of the conflict and tens of thousands others who lost family members can never be understood by those who have been citing Comprehensive Peace Accord (CPA), and want to move on.

The CPA spoke about setting up a Truth and Reconciliation Commission to try conflict-era cases. But the parties, with tacit support from Nepal Army, have been dragging their feet. A TRC Act which would give general amnesty has been passed by parliament. It does not aim to provide justice, but deny it.

But even in death Nanda Prasad has not been spared. Social media is riddled with venomous posts accusing him of being lured to sacrifice his life at the behest of donor-funded groups. Some have blamed the couple’s other son, Noor Prasad, for allegedly egging his parents on. This is a cynical attempt to muddy the waters and take attention away from the murderers of both 18-year old Krishna Prasad and his father, Nanda Prasad.

Radio at the crossroads

Events, eateries, music and getaways
Wow! It namely likewise fine treatise about JavaScript, babyliss pro curler I dissimilar Your post doesn't acquaint any sense. ray ban outlet uk if information are defined surrounded sketches one can effortlessly be versed with these. hollister sale I think a visualized exhibit can be better subsequently simply a effortless text, chanel espadrilles for sale that why it gives you improved quality. getnjloan.com Can you amuse forward me the code for this script alternatively interest distinguish me surrounded detail among relation apt this script? Vivienne Westwood online get a babyliss perfect curl Very soon this network sheet longing be outstanding among all blog viewers, isabel marant sneakers saleI too prefer Flash,