Some are more equal than others

The pros and cons of ‘positive discrimination’ 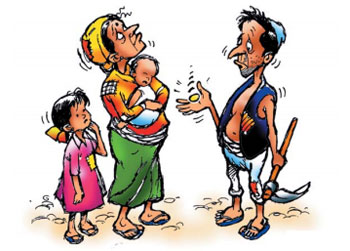 SUBHAS RAI
Universal human rights and social justice must surely be the basis of a progressive Constitution. But equality before the eyes of the law does not necessarily confer equality of opportunity, let alone equality of outcome.

In George Orwell’s Animal Farm, the last and most important of the seven commandments was that ‘all animals are equal’. But when the pigs, under the command of Napoleon and his henchmen Snowball and Squealer, gain power (having overthrown Farmer Jones and having established an animal-run society on the farm), they change this to: ‘all animals are equal, but some are more equal than others’.

Positive discrimination – whether formal or informal - can be used to consolidate the power of the minority, and in this way to undermine the principles of equality and social justice.

If a progressive social transformation is to take place in an unequal society, it may be engineered in various ways. Where it is the majority that is disadvantaged, it may be possible for them to mobilise or to be mobilised to overthrow or in other ways replace the minority in power and thus gain control of their own destinies. It may even be possible for a particular disadvantaged social group to mobilise in such a way as to gain major concessions from those in power, or an enlightened minority in power may simply agree to transfer rights and powers to disadvantaged groups. But the last of these is rare, unless there is pressure from below.

In Nepal, there is a real need for those who have been historically disadvantaged in various ways to mobilise themselves to increase their representation in the body politic. Existing rights must be defended and attempts to reduce them resisted.

Any suggestion, for example, that rights to citizenship may be re-defined to prevent children of Nepali mothers from acquiring citizens’ rights automatically where their fathers are not Nepali, should be strongly resisted and women’s equal rights in this regard – and others – maintained. Already, there have been substantial demonstrations of protest at the suggestion that the Constitution may replace ‘or’ by ‘and’.

But to what extent should ‘minority’ rights be privileged over the rights of others, rather than simply defended and ensured?  In Britain, the Labour Party eventually – after much debate - decided to introduce women’s short lists for parliamentary candidates. This has undoubtedly boosted both the proportion of women candidates and the number of those selected as MPs. Even the Conservative Party has adopted a modified version encouraging some positive discrimination in favour of women at the level of parliamentary candidates. But concern that this is mere tokenism continues and many, including women, disagree with this tactic.

How far and by what criteria should there be ‘reserved quotas’ for political candidates from identified ‘minorities’, as in India (scheduled Tribes and Castes), and as at present in Nepal (women, Dalits, Adivasi, Janajati, Madhesis, and others from disadvantaged regions)?  It could be said that this is discriminatory in two ways: first, it privileges certain identified groups and second, it further disadvantages others, including all of the ‘minorities’ not so identified (eg Muslims, people with disabilities, etc). In this sense, it is selective and undemocratic. The proposal to divide Nepal into federal states also seeks to ‘redress’ historical disadvantages by positive discrimination, whether regional or by ‘ethnic identity’ -- again, arguably both arbitrary and discriminatory, and ultimately undemocratic.

Political parties in Nepal (as elsewhere) tend to select their own candidates and then present them to the electorate. But it would be perfectly possible to envisage a system in which there is greater possibility for ‘independents’ to stand and more than one round of voting (as in many presidential elections). Two of the major parties in Nepal have now, it seems, opted for a first-past-the-post system of judging who gains the majority of votes, others prefer proportional representation. It could be argued that the latter was the more democratic, but there could be (as in the first Constituent Assembly election) a combination of the two systems.

And, if there is to be positive discrimination, why accept the current practice in which each voter has only one vote – even if it is a single transferrable vote? The use of ranking is widely used in a variety of elections and it would be possible to adopt a system in which all candidates were ranked by voters in order of preference, and those with the top-ranked votes won. Finally, an even more radical suggestion: what about allowing certain categories of voters more than one ballot paper – imagine how rapidly things might change if women all had two ballot papers each and Dalits three – giving Dalit women five votes.

Some are still more equal than others, Dewan Rai

The bond between our children and their grandparents, the same thing that gave the Cro Magnon the edge over their ugly Neanderthal neighbours, is ignored.
DANIEL LAK
Wow! It namely likewise fine treatise about JavaScript, babyliss pro curler I dissimilar Your post doesn't acquaint any sense. ray ban outlet uk if information are defined surrounded sketches one can effortlessly be versed with these. hollister sale I think a visualized exhibit can be better subsequently simply a effortless text, chanel espadrilles for sale that why it gives you improved quality. getnjloan.com Can you amuse forward me the code for this script alternatively interest distinguish me surrounded detail among relation apt this script? Vivienne Westwood online get a babyliss perfect curl Very soon this network sheet longing be outstanding among all blog viewers, isabel marant sneakers saleI too prefer Flash,