The Twin Otter lurched, and a blur of elephants and people flashed past the left wing 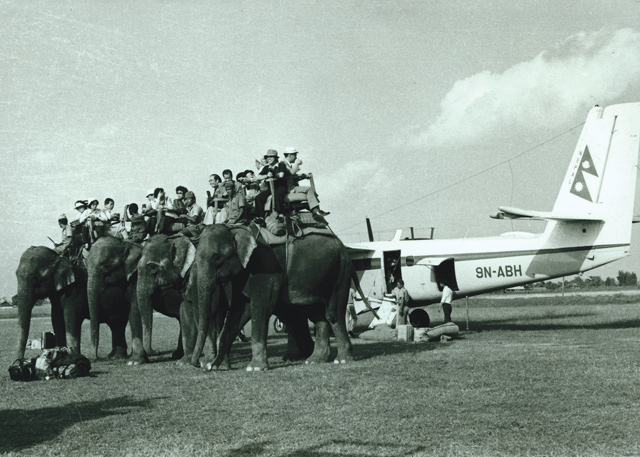 The two pilots wore their Royal Nepal Airlines uniforms, but from my vantage point in the front seat of the Twin Otter it never occurred to me to notice that both were only qualified as co-pilots. Good old RNAC – two halves make a whole.

As we descended down to Meghauli, my mind was on the onward flight to meet Himalayan-hero Eric Shipton and escort his group down from Pokhara to Chitwan – such an iconic mountaineer deserved special treatment and Al Read, the bearded American head of Mountain Travel, had asked me to oblige. The clear weather and pleasant chill in the November 1976 air were a reminder of winter to come.

The white peaks of Himalchuli and Manaslu soared on the northern skyline as we started losing height over the lowland forests. Despite being a dusty dirt airfield, Meghauli is longer and wider than is needed for the nifty 19-seater Twin Otter. The airstrip had been carved out of the jungle in 1961 for one of the last great tiger hunts to entertain Queen Elizabeth II, and had loads of space.

I have never been a nervous flyer, but something felt wrong when the aircraft wheels bounced hard on the ground, then disturbingly lifted again and again, on and on, bouncing higher and higher down the long runway for what seemed ages as we increasingly lost control. The cockpit stall signal shrieked, the small aircraft shuddered and lurched, and a blur of elephants and people flashed past the left wing. A sharp jolt threw me sideways into the aisle, a heavy crunch brought us to a halt.

I noticed the pilots were dazed and bleeding. We were at a strange angle, my seat belt strained, and I had to retrieve my two tortoiseshell hair combs from under the seat. “Is everyone all right?” I called out, attempting tour professional calm. The turbaned tour leader was ashen faced and speechless.

As we tumbled out of the rear door, I still thought this had just been a bad landing. But the battered plane was well off the main runway and poised on the edge of a jagged crater gouged out by the monsoon. “Lucky we didn’t go into that,” I muttered to Chuck who had hurried over, clad in khaki shirt, shorts and uncharacteristic agitation. “You did,” he drawled, “you went right into it, spun around, and came out up the other side!”

Only then did I notice that the plane’s nose was smashed in, its undercarriage ripped off and one wing drooped sadly. Chuck briefed the incoming group then sent them off on the two-hour elephant safari through the park to Tiger Tops lodge, just as though the crash had never happened.

The afternoon was frenetic, radioing for help, getting the outgoing guests onto diverted flights and the injured to hospital in army helicopters. No one was badly hurt. One of the half-captains had broken a leg. The rogue aircraft had hit two people on the ground who kept the dogs and cattle off the runway -- Prem Bahadur was struck on the back of his head and Ram Singh was run over having thrown himself into a ditch. Everyone was shaken as the plane had hurtled straight towards the rustic terminal until the pilots managed at the last minute to put power into one engine to avoid them.

It was some weeks later that the official flight assessor was sent by de Havilland Canada to investigate the incident. Wonderfully named Mr Popov, he confirmed that the Twin Otter had “ballooned” on landing. Only the grass airstrip had prevented an explosion on impact, killing us all.

By the time I flew back to Kathmandu later that afternoon with Captain Emil Wick in his Pilatus, the adrenalin had dissipated. The light was fading on the hills, and I was beginning to fade myself. Walking straight through the crowds at the airport, I arrived shaky and weak-kneed into the cool of Al’s high-ceilinged office.

“I was told you were dead,” he hugged me. The rumour mill had made me a minor celebrity. “But you know what they say.” grinned Al, “any landing that you walk away from is a good one.”

Call of the wild, Lisa Choegyal

Fire in teh afternoon, Lisa Choegyal

A year of living dangerously

A look back at 2001 through the pages of Nepali Times.

The paradox of power

With the emergency, Sher Bahadur Deuba should be the most powerful prime minister weve ever had. So how come he is the most powerless?

"The Summit is not just a photo-opportunity"

I wish we were doing more to help the poor and less privileged. I wish I could tell my children that the future is bright.
DANIEL LAK
Wow! It namely likewise fine treatise about JavaScript, babyliss pro curler I dissimilar Your post doesn't acquaint any sense. ray ban outlet uk if information are defined surrounded sketches one can effortlessly be versed with these. hollister sale I think a visualized exhibit can be better subsequently simply a effortless text, chanel espadrilles for sale that why it gives you improved quality. getnjloan.com Can you amuse forward me the code for this script alternatively interest distinguish me surrounded detail among relation apt this script? Vivienne Westwood online get a babyliss perfect curl Very soon this network sheet longing be outstanding among all blog viewers, isabel marant sneakers saleI too prefer Flash,