We are so desperate to move on, we are willing to pass a constitution that won’t guarantee a majority of citizens equality and freedom 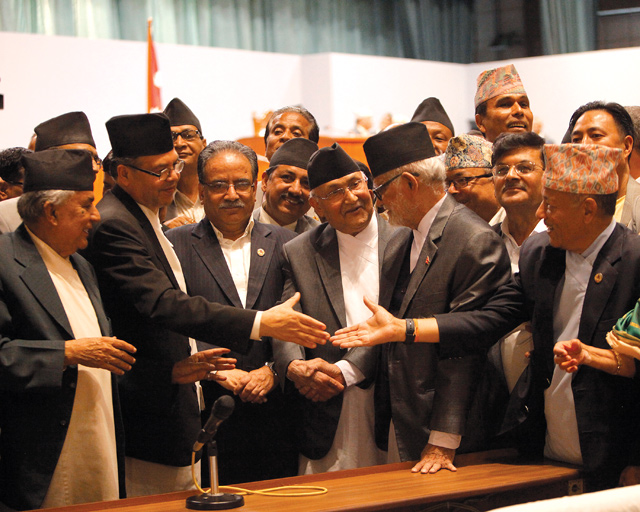 The past few weeks have spared no one: cops have been hacked, babies and children killed, teenagers gunned down, grandson and grandfather killed and women shot dead.

The violence that erupted in the western Tarai over the unjust demarcation of federal provinces shifted to the east. The petty electoral interests of a few undeserving politicians have cost the country dearly. The demands of the Tharus in the west were blatantly ignored in favour of a province that favoured a few honchos in the NC-UML-UCPN(M) trinity and their largely Bahun-Chetrri constituencies.

In response, a Tharu agitation began and culminated in the Tikapur killings of 24 August which claimed the lives of eight people, including a two-year-old baby. Kathmandu remains wilfully aloof, and those with interest have been denied any detail into the happenings of the fateful day. So, I guess we’ll never really know the truth: whether the Indians or Baburam Bhattarai were involved or whether Madhesi and Tharu leaders incited the violence. Or whether it was just one of those ghastly bloody days with no specific reason.

Either way, that was just the beginning. Most unfortunately, by now the demands of the Tharus have been completely eclipsed by the demands of Madhesi party leaders and activists in the eastern plains. While the Tharus have called off their agitation, the violence rages in Jankpur, Birganj, Siraha. The state continues to be relentless in its use of force to meet what seems to be a sporadically-violent agitating mass. More than 40 people had been killed till press time Thursday.

Meanwhile, in Kathmandu the supreme leaders are hammering through a constitution – like it or not. To them, it’s all about finally reaping that peace dividend which never actually came and seemingly never will for most Nepalis. A constitution, as the culmination of the peace process, will deliver the following to the following: cemented hall of fame credit to Sushil Da for finally getting it done, PMship for Mr oh-so-wonderful K P Oli, and along with the nationalist supremo tag. Perhaps even a stint at President for our loving comrade Prachanda.

As for the Madhes-based parties, they are hard at work to cash in politically on the ignorance of the government in Kathmandu. They are equally to blame for the collapse in the process and it is outlandish for the Madhesi leaders to now attempt to wash their hands clean after eight long years of shared ineptitude. Even now, as protests continue to be violent, there seems to be little effort on their part to ensure peaceful agitation. The mood among the political elite seems to be more-or-less the same: violence, death and destruction hold little significance when what is at stake are political and economic benefits. To call for retreat now, in the eyes of both the state and agitating parties would be defeat.

For the ordinary folk, there is nothing to gain: no power, no money, no leverage, nothing. The constitution has little to do with the wishes of the people. Even the voting process has been deliberately made mechanical, rushed and translucent at best. People watching at home are denied the ability to be able to easily follow what clauses are being voted on. The process is so ritualistic that even those proposing amendments are not allowed to speak, unless they wish to revoke the proposal.

Perhaps the most foolish-looking in this charade have been the women CA members who individually and collectively took part in rendering themselves, their mothers, daughters and all other Nepali women unequal and second-class citizens for what one can only imagine is proximity to power. It is not only a matter of shame, it is a blot on our history that will be a black day in Nepal’s feminist movement.

Not much can be done now. This constitution process has wasted the political struggles of the past couple of decades, including the lives they cost. And yet, people are eerily quiet. It seems that the very idea of a constitution, regardless of what is in it or what it might beckon is more welcome than continued political wrangling. Even in the midst of violence and curfews, and with a constitution which won’t guarantee the majority of the citizens’ equality and freedom, the sheer desperation for a final end to this drawn out process is winning out. If nothing else, we must ensure at least the violence subsides before the constitution is promulgated.

Saptahik Bimarsa, 21 September
Excerpts from an interview with Krishna Bahadur Mahara
Wow! It namely likewise fine treatise about JavaScript, babyliss pro curler I dissimilar Your post doesn't acquaint any sense. ray ban outlet uk if information are defined surrounded sketches one can effortlessly be versed with these. hollister sale I think a visualized exhibit can be better subsequently simply a effortless text, chanel espadrilles for sale that why it gives you improved quality. getnjloan.com Can you amuse forward me the code for this script alternatively interest distinguish me surrounded detail among relation apt this script? Vivienne Westwood online get a babyliss perfect curl Very soon this network sheet longing be outstanding among all blog viewers, isabel marant sneakers saleI too prefer Flash,