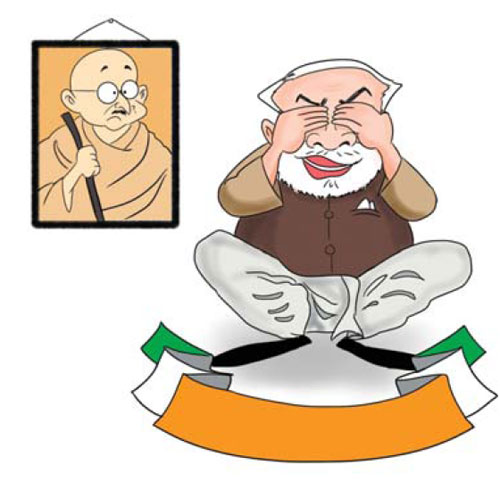 Much recrimination has roiled the waters of the Sirsiya stream dividing Raxaul and Birganj between September-December 2015, punctuated by three statements from New Delhi’s Ministry of External Affairs. The latest note of 21 December indicates that, at long last, the Ministry may be coming to its senses on the senselessness of this economic blockade imposed on India’s most steadfast neighbour.

The statements are themselves works of fine penmanship that allow little room for misinterpretation. Thus, the menacing tone of the 20 September note was lost on no one, released even as President Ram Baran Yadav was releasing the Constitution. It read: ‘We note the promulgation in Nepal today of a Constitution.’

The wordsmiths at MEA-India thought fit merely to ‘note’ after seven years of effort, in the wake of a ten-year conflict, a decade of polarising transition, and an earthquake to boot. The scorn heaped on Nepal’s constitutional process – history will regard it as such – was heightened by the precise employment of the article ‘a’ rather than ‘the’ in referring to the document adopted by an elected, inclusive Constituent Assembly.

A day later, on 21 September, came another press note, with suggestion of the blockade to come. The Tarai-Madhes had been in agitation for a month previously without obstruction of the border or highways, but MEA-India provided ample hint of its intentions with the sentence: ‘Our freight companies and transporters have also voiced complaints about the difficulties they are facing in movement within Nepal and their security concerns, due to the prevailing unrest.’

Then came the blockade, with the Madhes-based parties as willing partners. Indian customs, Indian Oil Corporation and the Seema Suraksha Bal implemented an elaborate embargo under orders from New Delhi. For three months, there has been calibrated release of fuel and essential supplies to fulfill no more than 10 per cent of Nepal’s needs, in fits and starts to keep the economy off-keel.

Nepalis swung between hope and despair, counting the tankers and ‘bullets’ coming in, hanging on imagined signals of New Delhi’s magnanimity, applauding individual articles in the Indian press and speeches in the Rajya Sabha.

While the Kathmandu establishment and the Madhes-based politicians helped set the stage for this dangerous turn of constitutional politics, India’s blockade widened the gap between hill and plain communities. Fortunately, the polarisation has not escalated to conflagration, hence the urgency for New Delhi to stop adding fuel to the tinder.

Perhaps Nepal’s resilience under the blockade, or some welcome circumspection about its own immaturity, made New Delhi come around to its 21 December statement. The note certainly points to a backtracking by India, even if the spinmeisters at MEA-India try to make it look like Kathmandu’s surrender.

The statement on Monday points to a geopolitical gear-shift by India in welcoming the Nepal cabinet’s decision of what has been the months-old negotiating plank of the big-three parties. These include, as stated in the Indian statement, ‘proportionate inclusiveness and delineation of electoral constituencies on the basis of population’ and the ‘demarcation of provinces to be addressed through an appropriate arrangement in the Constitution on the basis of political consensus’.

MEA-India ‘welcomes’ these ‘important decisions’ as ‘positive steps that help create the basis for a resolution of the current impasse in Nepal’. Indicatively, the Ministry also saw fit to upgrade the title it gave the notes – from ‘Statement on the Situation in Nepal’ in September to ‘Statement on Nepal’ in December.

It does indeed look like India has decided to de-escalate, but why the blockade at all is the Mother of All Questions. While we work on that, this should be the start of a pushback to the southern interventionism that has dogged Nepal throughout its modern era since 1950.

New Delhi’s appetite to intervene increased after 2006, as sycophantic Kathmandu politicians allowed the intelligence apparatchiks to run amok. Micro-management penetrated the government superstructure, going as far as the makeup of cabinets and appointment of officials high and low, including the head of the anti-corruption watchdog.

Nepal’s socio-economic advance under the new Constitution is good for Big India, the pre-condition for this being a halt to India’s micro- and macro-management. New Delhi having flagged its step-back, the Kathmandu establishment must now move proactively to make amends for its own ills and malfeasance. As a start, Prime Minister KP Oli must stop spouting invectives against the plains movement and form a credible commission to investigate the death of Madhesi demonstrators in police firing.

The vital remaining task will be the demarcation of federal provinces in a way that does not cheat the citizens of plain, hill and mountain. Federalism must be win-win for all – or not at all. As for the blockade, even as it winds down we must seek accountability and reparation for the devastation wrought. The Indian side, meanwhile, must internalise the Economic and Political Weekly editorial of last week which termed the blockade 'unworkable, dangerous and unethical'.

"Strengthening" income tax laws wont help. Nothing will, until we learn the art of implementation.
ARTHA BEED

The Indo-Nepal treaty is deadlocked as deadline nears, only a last-minute miracle can save it.
Wow! It namely likewise fine treatise about JavaScript, babyliss pro curler I dissimilar Your post doesn't acquaint any sense. ray ban outlet uk if information are defined surrounded sketches one can effortlessly be versed with these. hollister sale I think a visualized exhibit can be better subsequently simply a effortless text, chanel espadrilles for sale that why it gives you improved quality. getnjloan.com Can you amuse forward me the code for this script alternatively interest distinguish me surrounded detail among relation apt this script? Vivienne Westwood online get a babyliss perfect curl Very soon this network sheet longing be outstanding among all blog viewers, isabel marant sneakers saleI too prefer Flash,