The reason Swaraj is here, according to some analysts, is to make sure that Oli got the message that in return India wants loyalty 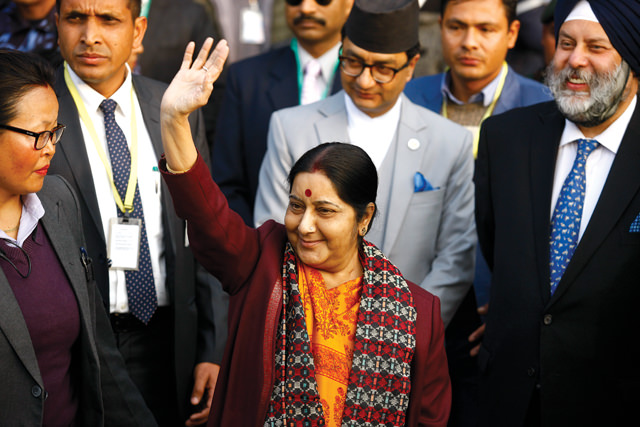 Gopen Rai
Indian Minister of External Affairs Sushma Swaraj arrives at Kathmandu airport on Thursday afternoon even as the UML and Maoists were trying hard to forge unity.

Despite the delay in the UML and Maoists pushing through with party unification, most Nepalis think they will, or should, join up so that development can be kickstarted while controlling inflation and corruption.

This was among the responses to the nationwide Himalmedia Opinion Survey 2018 conducted last month. But a dispute over whether UML Chair KP Oli should be Prime Minister for a full five-year term, or he should resign halfway through so Maoist supremo Pushpa Kamal Dahal can form another government is delaying the unification process. To complicate things, Dahal is insisting on leading the unified party if Oli chooses to become PM ahead of him.

Nepal’s two largest communist parties contested parliamentary-provincial elections in an alliance with a common platform that promised to usher in an era of stability and prosperity.

As if there is no tomorrow, Editorial

Public endorsement of the UML-Maoist victory in elections was also corroborated by the Himalmedia survey results. Only 6% of the 3,612 respondents said the UML and Maoists should not unite, 24% were a bit skeptical whether they would, but 54% were positive about left unity. Of them, 29% said they should unite while 24% were hopeful that they would.

However, let alone unification and a stable government, it is not even certain who will be the next PM. Chances are high that the two parties will first form the government, before turning their attention to the planned merger. Oli and Dahal are trying to outsmart each other to grab more power. The NC, two Madhesi parties and even India are all waiting and watching to see how, or if, the UML-Maoist unification plays out.

When India’s External Affairs Minister Sushma Swaraj arrived in Kathmandu on Thursday for a two-day visit, UML and Maoist leaders were in the middle of a merger meeting which again ended without agreement. Later in the evening, Oli held a reception for Swaraj at the Soaltee Crowne Plaza.

Result from the Himalmedia Public Opinion Survey 2018. Find out more.

“Dahal has publicly endorsed Oli as the next PM, but Oli is silent about Dahal’s demand that he be made the unified party’s chair,” explains NC leader Abhishek Pratap Shah. “All is not well between the two, so everyone else is trying to take advantage of it.”

Oli knows only too well that the Maoists can team up with the NC and Madhesi parties to keep him out of power, so Shah thinks Oli is trying to get India on his side.  He knows he cannot always keep antagonising India.

However, some analysts say that although New Delhi sees Oli as a pro-Beijing nationalist, the Indian establishment has concluded that he cannot be stopped from becoming the new PM. Two weeks ago, Indian Prime Minister Narendra Modi called Oli to say: "India is willing to work with the new government."

The reason Swaraj is here, according to some analysts, is to make sure that Oli got the message that in return India wants loyalty. UML leader Pradeep Gyawali, one of Oli’s few close confidantes, says: “India is clearly trying to mend ties with Nepal, and we welcome their initiative. If India respects Nepal as a sovereign country, the incoming prime minister will not have problems with New Delhi.”

Memories of the future

The shame of the present political mess makes the pain of the past more intense.
CK LAL

Sikkim may not be perfect, but it has some lessons for us in Nepal.
ARTHA BEED

"Who brought the nation to its present condition?"

Translated excerpts of the hard-hitting speech delivered by Chief of Army Staff, Prajwalla SJB Rana, at the convocation of the command and staff training at the Tokha on Wednesday.