Memories of terror in Madi

A decade after the bomb that killed 36 bus passengers, survivors are abandoned by the state and suffer physical and mental trauma
Narayan Dhungana In CHITWAN 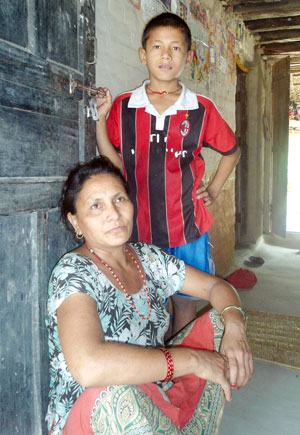 THE UNDEAD: Mankumari Chhetri and her son, Ashish who is not eligible for compensation because he is officially listed as ‘dead’.
Nine years after the Maoists bombed a passenger bus in Chitwan’s Madi region, the survivors and victims’ families are still dealing with psychological trauma and economic hardship.

For survivors, the biggest challenge is still getting state recognition of the permanent physical disabilities they suffered from the massive bomb. Compensation has been distributed, but selectively and money has long gone.

Ashish Chhetri (pic) was six years old and accompanying his mother Man Kumari to hospital in Bharatpur on the fateful day in 2004. Authorities found mother and son thrown onto the riverbank and rushed them to the emergency. Man Kumari woke up after 12 hours of intensive care, but Ashish was in a coma for two weeks.  Today Ashish has a scar around his head like the rim of a saucer and says he gets constant headaches and has difficulty studying.

In Kathmandu, records at the Peace and Reconstruction Ministry (PRM) have Ashish at number 39 on the list of those who died in the blast, which is why he was not eligible for any compensation and medical costs that survivors are entitled to. His mother, who was badly wounded and became deaf from the blast is listed under ‘minimal injury/disabled’ and received Rs 52,000, which she says was a pittance.

When Man Kumari wrote to the PRM in November 2007 about a scholarship for her son, she was rebuffed. Five years later, she got the local Peace Committee to write to the Chitwan district office about her son, but the administration ignored the request. After a prolonged battle against an apathetic bureaucracy Ashish, now 13, got an annual Rs 34,000 scholarship. But officially he is still listed as dead. 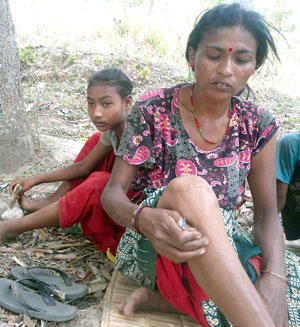 Bishnumaya BK with her children, showing her leg wounds. Her husband was psychologically affected by the bomb and often turns violent.
For a decade, the survivors has suffered physical and mental trauma from the attack, but their families have also suffered indirectly. Tired of waiting for government compensation, Purna Bahadur Gharti GC sold his land to pay for the Rs 300,000 needed for treatment of his injuries. As a result, he now cannot afford to send his son and daughter to college.

When Bishnumaya BK’s husband, Chandra, found his wife and 11-month-old son amidst the wreckage of the bombed out bus, he was psychologically scarred and is still unbalanced. He often turns violent, and once beat up his other son so badly he has head injuries. Today, Bishnumaya is having to single-handedly care for all three members of her family and herself. All she got was Rs 40,000 eight years ago.

“I spend every day feeling financially and psychologically bankrupt. How can we live like this?” asks Bishnumaya.

Ganga Bahadur Gurung of Ayodhyapuri was injured when he tried to help the survivors at the scene of the blast. He thought it was just a flesh wound but one and a half years later, he suddenly started suffering from mental illness. Then his father died and while he was going to Dhading for the funeral, he jumped into the Gandaki and drowned himself.

“My son became mad because of the long-term effect of the bus bomb, God knows how many other people will end up like him,” says his mother.

Although the government says 52 people were injured in the blast, the local victims committee has built a monument at the site, where an additional 23 people are listed as injured. None of them have received compensation. When they go to istrict administration office in Bharatpur to make their case, bureaucrats accuse them of lying.

Ishwari Prasad Poudel and his wife were injured in the blast but authorities at the district administration in 2005 said he was making things up. Later the CDO told him they lost his file. Ishwari resubmitted papers in 2008, but these were again lost. He tried a third time in 2012 and was instructed to go to the PRM in Kathmandu. This year, Ishwari was told there were no war survivor files registered in his name. By then he had spent more than Rs 30,000 just to prove his injuries were legitimate. 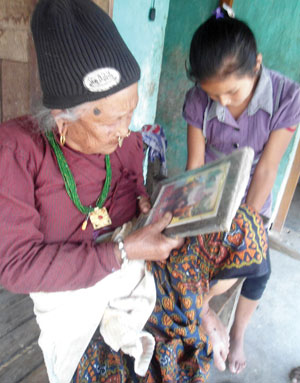 Lalshri Gurung shows the picture of her son, Ganga Bahadur, to her grand-daughter. Ganga Bahadur suffered mental trauma from the blast and committed suicide.
Laxmi Poudel had her five-month-old daugher Prasiddhi on her lap and was travelling in the bus with her grandmother when the bomb went off. Prasiddhi was thrown off the bus and was found near the river. She is now 10 and cannot walk, she has trouble studying and has nightmares. She never got any help from the government.

Sita Subedi of Ayodhyapuri was injured while her husband Atmaram and daughter Anjila died. At a program held at the Badarmudhe site to mark the ninth anniversary of the blast earlier this year, she was visibly distraught and traumatised.Sita says she has fainted while crossing the river to travel to Bharatpur. Sita’s name is on the list of insurgency victims at the PRM in Kathmandu, but she has not received a paisa.

Seventy-six-year-old Man Bahadur Baraili lost his daughter-in-law and grandson in the blast. He received compensation of Rs 150,000 each for the two, but nothing for another grandson who was injured. His son Prem, frustrated by the bureaucracy and obstacles ran away from home.

Lekhnath Adhikari, the deputy-chairman of the Badarmudhe Attack Victims Committee, spent nine months in bed recovering from his injuries. He was on a wheel chair for another year-and-half and four years on crutches. He has spent Rs 600,000 on medical bills, with no help from the state.

Says Adhikari: “If the government refuses to remember us victims of the Madi bomb even now, God knows how many tragedies will follow.”

"We haven’t lost, they haven’t won"

Interview with Maoist spokesman Krishna Bahadur Mahara BBC Nepali service, 17 November
Wow! It namely likewise fine treatise about JavaScript, babyliss pro curler I dissimilar Your post doesn't acquaint any sense. ray ban outlet uk if information are defined surrounded sketches one can effortlessly be versed with these. hollister sale I think a visualized exhibit can be better subsequently simply a effortless text, chanel espadrilles for sale that why it gives you improved quality. getnjloan.com Can you amuse forward me the code for this script alternatively interest distinguish me surrounded detail among relation apt this script? Vivienne Westwood online get a babyliss perfect curl Very soon this network sheet longing be outstanding among all blog viewers, isabel marant sneakers saleI too prefer Flash,