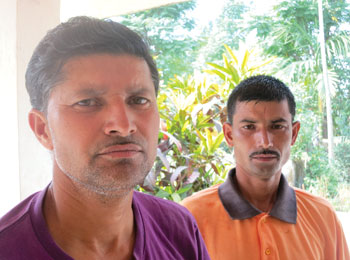 MICHELLE J LEE
POST TRAUMA: Hari Ghimire and his brother whose sibling and six other relatives died when the bus was blown up on 6 June 2005 in Madi of Chitwan.
Nearly a decade after the Maoists detonated a bomb under a bus in Chitwan killing 38 people, survivors in the village of Madi are still suffering from psychosocial trauma and economic loss from the attack.

There were at least 100 people in the overcrowded bus on 6 June 2005 as it left the village along a road that traverses the national park. The Maoists had information there were soldiers among the passengers, and planted a bomb where the road descended into a rivulet, connecting it to a detonator via a concealed wire.

It was by far the worst single attack by the Maoists during the ten-year conflict, and the physical and psychological scars of the tragedy are still visible in the people who inhabit this strip of Nepali territory sandwiched between Chitwan National Park and the Indian border. Three of the dead were soldiers, and 72 people were injured in the attack.

“I survived because I was sitting on top of the bus,” remembers Krishna Adhikari, who lost one of his legs in the blast. “For a long time, I was afraid to travel by bus because I would be reminded of what happened.”

Today, Adhikari is a stay-home father who struggles to pay for the education of his children.  The government gave just Rs 10,000 to victims like him. At least four of the injured died later because they couldn’t afford treatment, and many like Adhikari used up their savings or took out loans to treat their serious injuries. 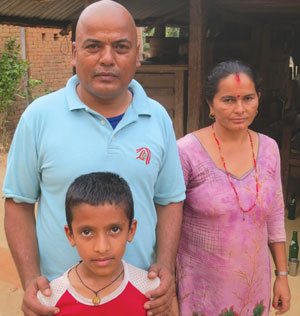 MICHELLE J LEE
Krishna Adhikari with this wife and son, remembers how he was sitting on the roof and survived, but lost one of his legs.

“Being a victim comes at a great cost,” he says, “while my friends have gone abroad and have made money, I am stuck at home because of my disability.” 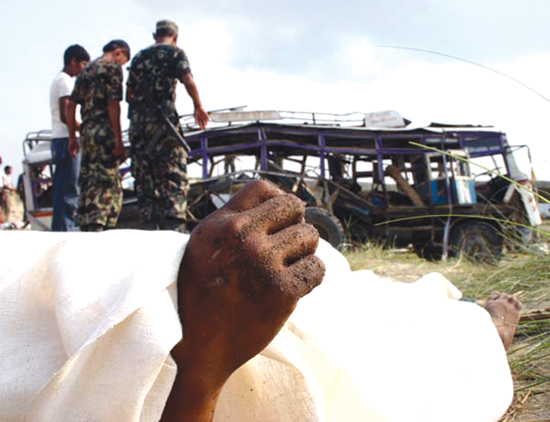 KUMAR SHRESTHA /A PEOPLE WAR
A mother in a white shroud and her baby were sitting in the bus and were instantly killed.

Most of the bitterness in Madi among the survivors and relatives of victims is against the government for the neglect, as well as the lies. Compensation has been handed out by successive governments, but mostly to those with political connections and not to the genuine survivors or victims.

“The war should have been between soldiers and guerrillas, but the Maoists blew up the bus to sow terror,” says Shiva Subedi, who lost his father in the attack, “they knew the bus was full of civilians and they killed them on purpose.” Maoist chairman Pushpa Kamal Dahal has admitted that the bomb was a mistake, and although he issued a statement regretting the incident, he hasn’t formally apologised to the victims face-to-face. 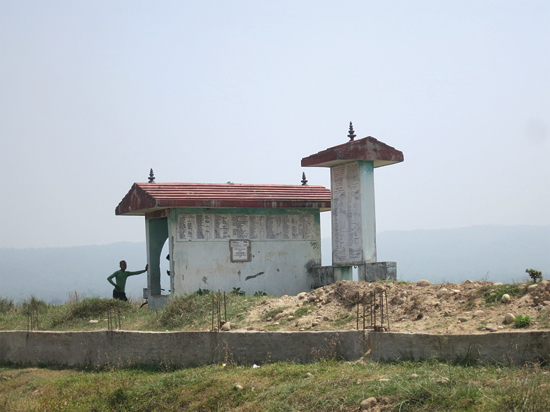 MICHELLE J LEE
The memorial to the 38 victims at the site of the bomb attack. 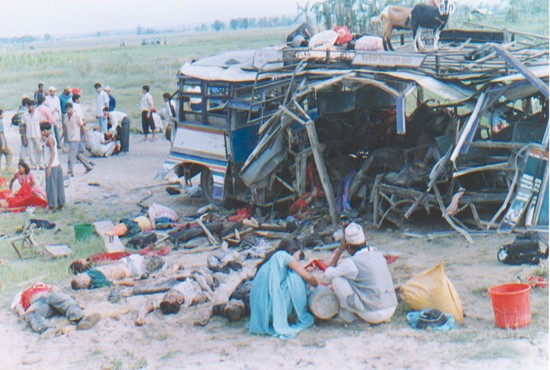 A PEOPLE WAR
Two goats tethered to the top of the bus survived.

Nama Ghimire remembers that day nine years ago like it was yesterday. His son, daughter, son-in-law, sister-in-law, and two grandchildren were on the bus. None of them survived. Time hasn’t healed his grief, and every festival season or anniversaries like the one earlier this month reminds him of the loss.

He could not bear to stay with all the memories and emptiness lingering in his house, and moved to another city. “In the beginning, there was so much stress and tension in my head,” Ghimire recalls, “my wife still can’t come home because it breaks her heart.”

The Ghimires are struggling to educate their remaining grandchildren, and Nama’s relations with his son’s in-laws have soured. “When my son died my daughter-in-law took all the compensation money and married another man, I am worried about my grandson,” he says.

Nama Ghimire’s oldest son, Hari, adds: “My younger brother was the decision-maker in our  household. It was his dream to see all the children well educated, but now our family has to struggle to educate them. They are so smart, but it breaks my heart that we cannot afford to send them to school.”

For the people of Madi, the war isn’t really over yet. They still struggle to come to terms with their loss, and the deaths of so many relatives and neighbours. Every anniversary, journalists come to Madi, but fewer than before. For the villagers, the questions remain unanswered: “Why were they killed? What will happen to those who killed them?”

Krishna Adhikari is nonetheless hopeful. He says: “I still believe that one day, justice will be done, education will be free for our children, and medical treatment will be given to those who were injured during the war.”

It is evident there is a big gap in Madi between hope, and reality.

"This is Radio People’s Republic."

The Maoists are taking the revolution to the airwaves with their own FM radio
RAMESWOR BOHARA in NEPALGANJ
Wow! It namely likewise fine treatise about JavaScript, babyliss pro curler I dissimilar Your post doesn't acquaint any sense. ray ban outlet uk if information are defined surrounded sketches one can effortlessly be versed with these. hollister sale I think a visualized exhibit can be better subsequently simply a effortless text, chanel espadrilles for sale that why it gives you improved quality. getnjloan.com Can you amuse forward me the code for this script alternatively interest distinguish me surrounded detail among relation apt this script? Vivienne Westwood online get a babyliss perfect curl Very soon this network sheet longing be outstanding among all blog viewers, isabel marant sneakers saleI too prefer Flash,