Taking the lead on lead

Nepali children are exposed to alarmingly high levels of lead, which is slowing their intellectual development
Sonia Awale Concerns about air pollution and unsafe drinking water have overshadowed another health hazard with a pernicious long-term impact on Nepali children: the alarmingly high concentration of lead within homes, schools and outdoors.

Two recent studies that analysed blood samples of children in Kathmandu and Birganj showed most of them had a Blood Lead Level (BLL) several times the threshold deemed safe by the US Centres for Disease Control and Prevention. In Kathmandu, 64.4% of children aged 6 months-3 years had a BLL above the danger mark of 5µg/dl (micrograms per decilitre). Children aged between 10-15 in Birganj fared much worse: all had an elevated BLL, with 84% showing lead in blood > 10 µg/dl.

“This is a frightening scenario indicating that two in three children in the Valley will grow up to be individuals with limited mental and intellectual capacity,” said Imran Ansari, a paediatrician at Patan Hospital. “Imagine what this will do to our country.”

Scientists have found a strong correlation between elevated BLL and decreased IQ. A survey of primary school children in Kathmandu in 2013 estimated every additional 10 µg/dl lead concentration in blood resulted in a drop in IQ of 2.35 points.

“The situation is particularly serious because lead gets bio-accumulated in the human body and is rarely discarded, and when pregnant women are exposed to lead it can affect the unborn child,” said Sujan Raj Panthi at the Nepal office of the World Health Organisation (WHO), which commissioned one of the studies. “Our major concern is that the sources of lead are easily accessible to children, in paint in the school and household, in dust and in shiny, colourful toys.” 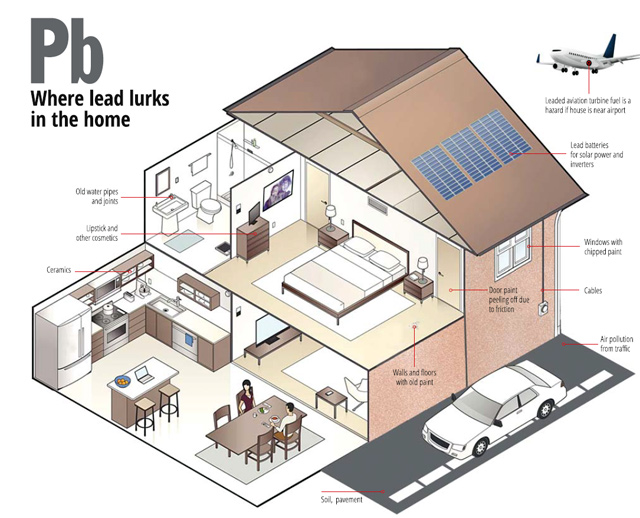 Although lead is no longer an additive in petrol sold in Nepal, it is still widely used in enamel paint and toys, plumbing joints, batteries, ceramics and cable. Effective June 2015, Nepal set the standard for maximum lead concentration at 90ppm, however, paints sold here still have lead levels much higher than the limit, some with concentrations several thousand times more than the safety threshold.

Multinational paint companies in Nepal comply with international standards for lead, but poor enforcement means many local and Indian brands flout the rule (see box below). Nepal's toxic chemical standard for toys, including lead, comes into effect on 15 July. However, there are few facilities for routine testing, kits are not available, and warning labels are not enforced.

Many households and schools surveyed in Kathmandu recently were found to have unacceptable concentrations of lead indoors. Dust pollution and post-quake debris containing chipped old paint are just two reasons why it can be hazardous for children to play outdoors as well. “Lead contamination is not a priority because it doesn’t have immediate impact, but in the long-term it can have damaging consequences. We need more test kits and screen children regularly,” said biochemist KD Mehta at the BP Koirala Institute of Health Sciences in Dharan.

Imran Ansari at Patan Hospital agrees that more testing kits and regular nationwide lead inspections are needed. His clinic gets children with abdominal pain every day and although he suspects lead toxicity, the hospital lacks kits for proper diagnosis. “Lead toxicity doesn’t have a defining symptom, but we don’t have predefined diagnostic tools for follow-up,” Ansari said.

Experts stressed public awareness about lead in the environment alone will not do the job when the overall environment is full of lead paint and paint dust. Existing regulations on lead content in paint, disposal of batteries must be monitored for compliance. A Blood Lead Level (BLL) study this year of children aged 6 months to 36 months in three Kathmandu hospitals showed that 64.4% had BLLs greater than or equal to 5 µg/dl (micrograms per decilitre). Even at low levels, lead exposure can cause learning and behavioural difficulties. Children with BLL equal to or more than 5 µg/dl can suffer irreversible neurological disorders.

Results published last month in the journal PLoS ONE indicated children from poor and Dalit families were most susceptible because they slept and played in rooms with high levels of enamel or chipped paint. Children who regularly played outdoors had BLLs 4.5 times higher than those who didn’t. Other findings:

Boys more at risk than girls Even at low levels, exposure to lead is known to affect intelligence quotient (IQ), and cause learning and behavioural difficulties in children.

Most paint products in Nepal have more than the legal 90 ppm of lead, according to recent surveys by the Centre for Public Health and Environmental Development (CEPHED). Another study, by the Society for Legal and Environmental Analysis and Development Research (LEADERS), found one paint brand with lead concentration as high as 200,000 ppm.

Some paint companies sell products with lead levels below 90 ppm outside of Nepal, but bring the same brand with higher concentrations in the domestic market, a 2011 CEPHED inspection showed. When Nepal set its 90 ppm standard for lead in paint in 2015, it stipulated each product should include a label stating the amount of lead it contained along with safety information. But the government’s own report last year revealed many Nepali companies do not comply.

“Most paint brands imported, produced, marketed and used in Nepal still contain above 90 ppm lead,” Ram Charitra Sah of CEPHED told Nepali Times. “It is very important that there is effective implementation of the standard and regular monitoring of paint companies.”

Multinational paint companies have more than 70% market share in Nepal, which means most paint, sold by volume, is below the 90 ppm requirement. But the remaining brands, mostly Nepali, are flouting the rule. (See below)

Asian Paints, which has a manufacturing base in Nepal and 40% market share, says the lead concentration in its products is much below the government requirement. “We are happy that the Government of Nepal has brought in a statute for maximum lead content of below 90ppm in paints,” said Budhaditya Mukherjee of Asian Paints, “but we also need a wide campaign of stringent market monitoring, a punishment mechanism, and the rule should be applicable for import as well as local manufacturing.”

Says Dhiraj Pokhrel of LEADERS: “Children are most vulnerable to lead exposure and yet our schools and hospitals use lead-rich enamel colours which can poison them.”

Lead levels are consistently high in toys and cosmetics. In June 2015, the government stipulated the 90ppm threshold in paints, and has set a toxic chemical standard for lead in children’s toys from this month.

Results of a survey of selected paint colours in the market conducted for the Ministry of Population and Environment last year showed that even after the government set the upper limit of 90ppm for paint in 2015, many brands that have lead at higher than the permissible concentration.

Note: Lead concentration in a paint brand differs widely depending on its colour.

For the love of a guru

The Guru of Love is a more mature work than Arresting God.
ANAGHA NEELAKANTAN

WWW 2003 proves were not in digital darkness.
VIKASH PRADHAN
Wow! It namely likewise fine treatise about JavaScript, babyliss pro curler I dissimilar Your post doesn't acquaint any sense. ray ban outlet uk if information are defined surrounded sketches one can effortlessly be versed with these. hollister sale I think a visualized exhibit can be better subsequently simply a effortless text, chanel espadrilles for sale that why it gives you improved quality. getnjloan.com Can you amuse forward me the code for this script alternatively interest distinguish me surrounded detail among relation apt this script? Vivienne Westwood online get a babyliss perfect curl Very soon this network sheet longing be outstanding among all blog viewers, isabel marant sneakers saleI too prefer Flash,