In Singati, people may not be able to read and write, but they know exactly what is causing the delay
Shankar Dahal in DOLAKHA 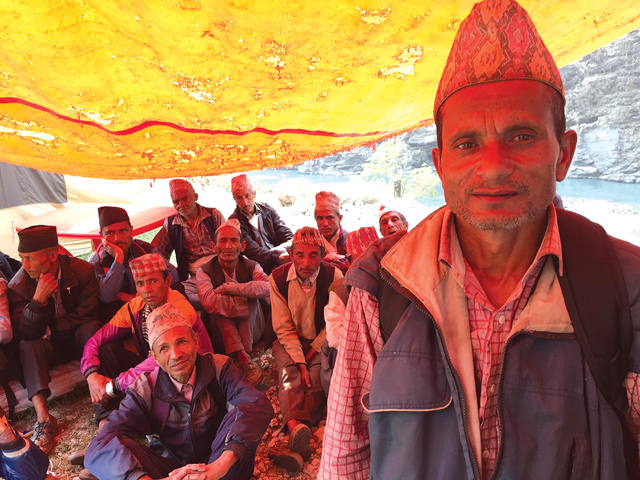 LONG WAIT: Janak Bahadur who lost his livestock and home in the 12 May aftershock waits for his turn to submit documents for a housing grant last week in Singati of Dolakha which is still in ruins one year later.

Nearly one year after the 12 May aftershock , there is still no official count of the number of people who died in the town of Singati, a line of houses along a road at the bottom of a narrow gorge of the Tama Kosi.

The rough count is 100, and most of them were survivors of the 25 April earthquake waiting for relief distribution from a truck that had arrived from Kathmandu. The aftershock triggered a massive rockfall that buried everyone. The truck was never found, and the bodies are still buried under rocks the size of houses.

One year later, survivors of the aftershock are themselves lining up again for relief – this time for the Rs 200,000 rebuilding grant that the National Reconstruction Authority (NRA) started distributing from here this month.

The 12 May aftershock brought mountainsides down to the north and south of Singati, and since most people were from remote villages up the mountains of Dolakha, no one has an exact count of the fatalities. Says one resident: “For weeks rocks were still falling and we couldn’t go out to look for anyone.” 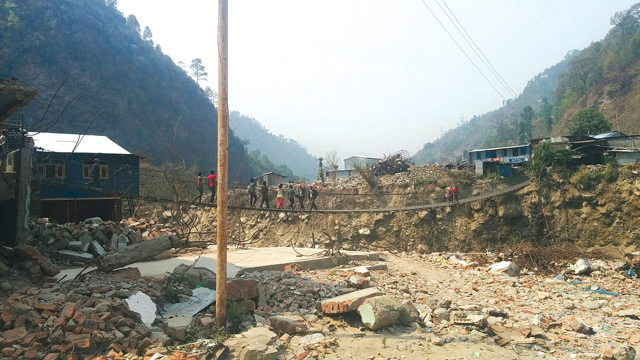 The men, most of them elderly who have walked up to eight hours to get here, wait patiently for their documents to be processed, looking confused by the complicated paperwork.

Utsav Shakya of the voluntary group, Saksham Nepal, says: “NRA has a card system to streamline distribution of the grant by swiping it when they come to Singati to shop, but the paperwork to get the card is puzzling for most villagers.”

Ram Thapaliya of NRA admits that the reason for the delay in distribution the reconstruction grants to families is the difficulty in identifying real victims. The other is that NRA itself is short-staffed.

Here in Singati, people may not be able to read and write, but they know exactly what is causing the delay: the political games parties play in Kathmandu and the competition between them to control donor grants and to take credit.

“We are waiting and waiting, but it’s all politics for them,” said a dejected looking 48-year-old Janak Bahadur of Lamidada who lost all his livestock and home in the earthquakes. His four sons and wife are safe, and survived the monsoon and winter in a tent. With his first instalment, he is going to rebuild the first storey of his house.

The NRA has so far distributed its first installment of the housing grant to 324 families victims in Singati, Ladukh and Lamidada of Dolakha and villagers have been given blueprints for earthquake-resistant houses.

The biggest problem facing villagers is the shortage of water, most springs have gone dry after the earthquake (see above) increasing the drudgery for women like Kali Tamang who has to walk for hours just to fill a jar. Her husband works as a porter.

She said simply: “Surviving the earthquake was the easy part, finding shelter and food is much more difficult.”

Singati after the quake, Dipesh Khatri

From Maoism to tourism

Knowing how to do IT

If you cant work a computer, youre unfit to lead a country
DANIEL LAK

For many refugees in the camps, America is the new Bhutan
ANUP KAPHLE in JHAPA

Not by promises alone

Nationalising education could be the worst thing for an already-fragile system
MALLIKA ARYAL
Wow! It namely likewise fine treatise about JavaScript, babyliss pro curler I dissimilar Your post doesn't acquaint any sense. ray ban outlet uk if information are defined surrounded sketches one can effortlessly be versed with these. hollister sale I think a visualized exhibit can be better subsequently simply a effortless text, chanel espadrilles for sale that why it gives you improved quality. getnjloan.com Can you amuse forward me the code for this script alternatively interest distinguish me surrounded detail among relation apt this script? Vivienne Westwood online get a babyliss perfect curl Very soon this network sheet longing be outstanding among all blog viewers, isabel marant sneakers saleI too prefer Flash,