At the receiving end

Because Sorthak village is located in Chitwan district, it has not received as much attention as neighbouring Gorkha.
Raisa Pande in Chitwan 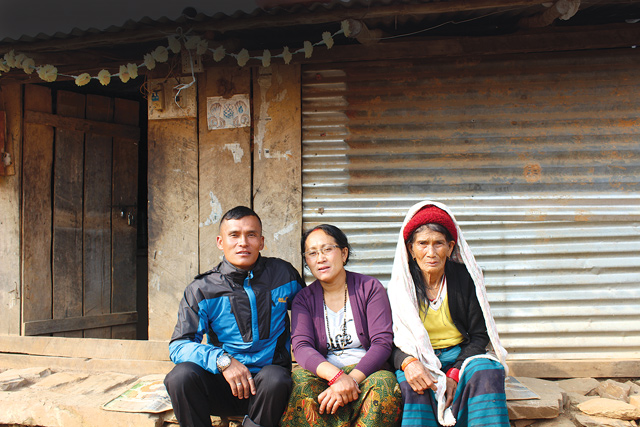 Pics: Raisa Pande
BETWEEN THE CRACKS: Krishna Bahadur Gurung and his family sit outside their temporary shelter in the village of Sorathok which, because it is located in Chitwan district, has not received as much attention as neighbouring Gorkha.

The 7.8 magnitude quake that rattled Nepal two years ago devastated the lives and livelihoods of its residents. While people around the country are finally moving towards recovery and reconstruction, for the residents of the village of Sorathok in Chitwan, temporary shelters have become permanent solutions.

Sorathok is in the shadows because Chitwan is not included administratively among the badly-affected distrcts, even though it borders Gorkha across the Trisuli River to the north.  Before the earthquake, Sorathok was a thriving Gurung village with 200 residents. But people have moved out and only 45 residents remain, trying to rebuild their homes.

They have moved from tarps to temporary tin shelters, but are exposed to hailstorms and rain. Every dark cloud raises fears about food supplies, the safety of livestock and their own wellbeing.

Luckily, no one was killed in Sorathok, but every house was damaged. Two years later, the village is a jumble of temporary shelters and remains of damaged structures. The earthquake changed more than just where the villagers were to live; it changed their way of life.

Most moved away from their land to rented rooms along the Kathmandu-Pokhara Highway, from where they have watched relief convoys headed to Gorkha. While other districts received considerable attention from national and international agencies, residents of Sorathok are refugees who haven’t even got the first part of the government’s housing grant. 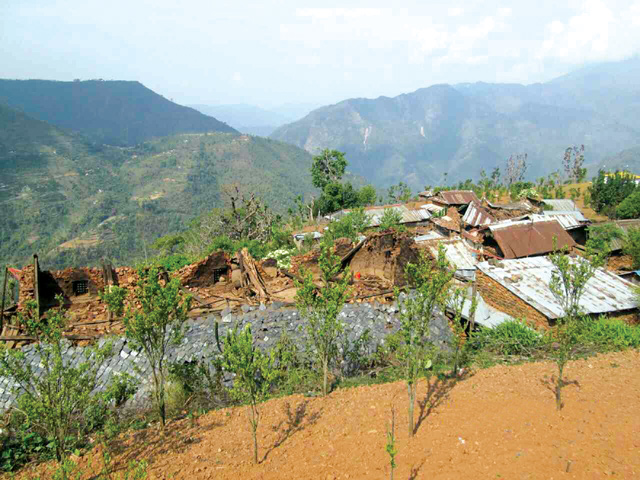 Krishna Bahadur Gurung
The devastation in Sorathok three days after the April 2015 earthquake and today. Although the debris has been cleared, most houses are still in ruins. 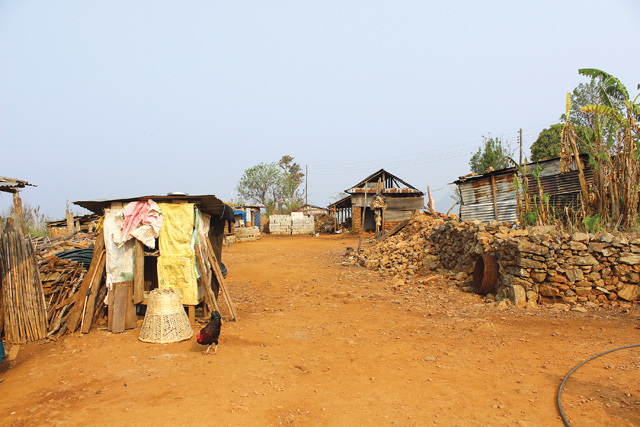 “We are just across the mountain from Barpak but people don’t think of us as victims of the earthquake because we’re in Chitwan,” says Krishna Bahadur Gurung, who heads a local relief committee.    Gurung is a retired solider who left the city to move back to his village 16 years ago to look after his aging parents and tend his orange orchard. The earthquake shook everything up, and Gurung has spent the last two years shuttling between Sorathok and the highway, organising relief.     When the earthquake struck, Sorathok was in Darechowk VDC, but with local restructuring for the 14 May elections it falls within Ichyakamana Rural Municipality. However, since they have had little help, these administrative changes mean little to villagers here.

One of the earliest challenges that Gurung encountered post-quake was collecting the Rs 10,000 from each household to clear rockfalls that had blocked the road to the village, for relief that never came.

For most of Sorathok’s residents, building a house is synonymous with rebuilding a community and resuming their cultural activities. Despite delays and government neglect, they are hopeful to soon get back on their feet.

Says Gurung: “Last year we thought we would finally get the rebuilding grant, but another year has gone by. We hope the government will keep its word.”

9 August | 3.30 PM NST
Wow! It namely likewise fine treatise about JavaScript, babyliss pro curler I dissimilar Your post doesn't acquaint any sense. ray ban outlet uk if information are defined surrounded sketches one can effortlessly be versed with these. hollister sale I think a visualized exhibit can be better subsequently simply a effortless text, chanel espadrilles for sale that why it gives you improved quality. getnjloan.com Can you amuse forward me the code for this script alternatively interest distinguish me surrounded detail among relation apt this script? Vivienne Westwood online get a babyliss perfect curl Very soon this network sheet longing be outstanding among all blog viewers, isabel marant sneakers saleI too prefer Flash,