If you want to learn a bit about Mongolia, and one of its most riveting traditions, find this uncommon film
Sophia Pande 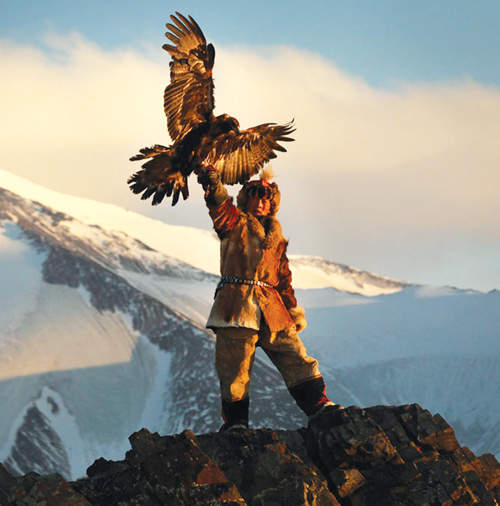 Last year in January, at the Sundance Film Festival where independent films premiere on a prestigious, fiercely competitive platform to gain recognition, and perhaps even more importantly, distribution, The Eagle Huntress – a movie about a young Mongolian girl, Aisholpan, was picked up by Sony Pictures Classics for US distribution. It was a massive achievement for a documentary film. It takes time for independent films to be released in theatres, even with the backing of the likes of Sony Pictures, so the film came out in the US and the UK only in late 2016, and is just now reaching the rest of the world.

Aisholpan, with the help of her loving father, disregards old-fashioned customs to become an eagle huntress at the age of 13. It is a story that breaks through the boundaries of cultures, giving us a glimpse into an extraordinary life and providing a view of how, with the support of one’s family, a young girl might do anything.

Set in Mongolia and narrated with nuance by Daisy Ridley, who became famous with Star Wars: The Force Awakens (2015), this breathtaking documentary begins with a traditional male eagle hunter setting his bird free after seven years of captivity. He thanks the bird for her loyal service, sacrifices a sheep for her to feed upon, and walks away after taking off her hood and fetters so that she may roam free for the remainder of her life. It is a thoughtful, deeply moving beginning, and one that sets the tone for the film.

The filmmakers slowly and patiently document Aisholpan’s life with her family, and her longing to become an eagle huntress, following in the footsteps of her father and grandfather. Director Otto Bell has an understanding of the importance of Aisholpan’s persona in a film like this, and he gives her room and space to breathe. Getting to know this young, brave, physically and mentally strong girl is one of the real pleasures of this film. That aspect, among others, is genuinely enhanced by the vivid but not showy cinematography of Simon Niblett.

Aisholpan faces many challenges, but her confidence, backed by her father’s unwavering trust in her, helps her through her journey as she trains, becomes fit enough to capture her own eaglet, compete in the national eagle hunting tournament, and finally, become a huntress in the harsh, wintry Mongolian wild.

Populated by interesting, articulate people, amazing scenery and a culture that we may never have access to aside from this film, The Eagle Huntress is a classic story of a bonding between girl and eagle, father and daughter, culture and wilderness, and an unforgettable coming of age for a lovely, free-spirited child who follows her dreams, which, due to her hard work and determination, come true. If you want to learn a bit about Mongolia, and one of its most riveting traditions, find this uncommon film.

Lourd of the dance

If moderate Madhesis are ignored, it is the militants who will benefit
CK LAL
Wow! It namely likewise fine treatise about JavaScript, babyliss pro curler I dissimilar Your post doesn't acquaint any sense. ray ban outlet uk if information are defined surrounded sketches one can effortlessly be versed with these. hollister sale I think a visualized exhibit can be better subsequently simply a effortless text, chanel espadrilles for sale that why it gives you improved quality. getnjloan.com Can you amuse forward me the code for this script alternatively interest distinguish me surrounded detail among relation apt this script? Vivienne Westwood online get a babyliss perfect curl Very soon this network sheet longing be outstanding among all blog viewers, isabel marant sneakers saleI too prefer Flash,