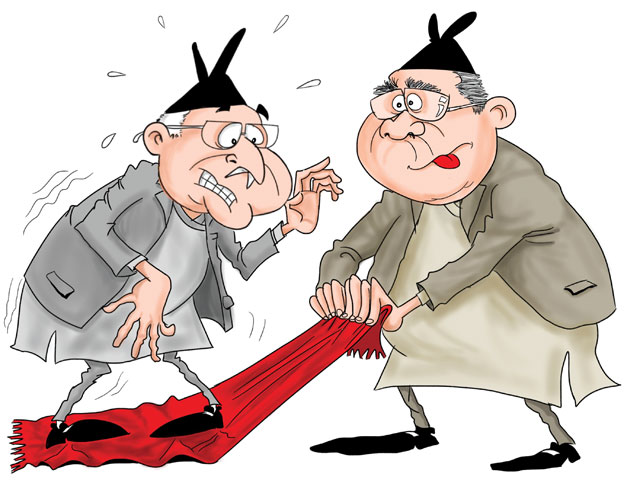 This week’s high drama for regime change appears to have fizzled out as the UML beat the Nepali Congress in its competition to woo the UCPN(M).

As this paper went to press on Thursday evening, there were indications that a ‘coup’ attempt by the NC to bring down the UML-UCPN(M) coalition, oust Prime Minister K P Oli and replace him with Maoist chairman Pushpa Kamal Dahal had been foiled.

UML Vice-chairman Bam Dev Gautam went to meet Dahal at his home early Thursday morning and appears to have convinced him that Oli was ready to hand over the premiership to him if he waited till after the budget is presented on 28 May. Later, when a delegation from the NC went to meet Dahal, the Maoist leader reportedly thanked them for their offer, but that he’d have to decline for now.

What this means is that the NC’s attempt to register a vote of no confidence this week and form a government with the Maoists and the support of Madhesi parties has not been successful. But it firmly established the UCPN(M) as a kingmaker party since Dahal would be the next PM no matter which side won the power struggle.

The NC accused the Oli-led coalition of being unsuccessful in ensuring earthquake relief delivery, in governance, resolving the Madhes crisis and curbing the black market. It proposed Dahal as prime minister in a new coalition that would include the NC. The UML managed to convince Dahal that it would not press for the investigation of wartime atrocities.

As things stand now, the parties in the present coalition will remain the same, but there will be a new prime minister (probably Dahal) and a new ministerial lineup after the budget is passed.

"We urgently need the budget"

"This isn't a popularity contest"

Interview with CA Speaker Subash Chandra Nembang Himal Khabarpatrika, 17 September-1O October
Wow! It namely likewise fine treatise about JavaScript, babyliss pro curler I dissimilar Your post doesn't acquaint any sense. ray ban outlet uk if information are defined surrounded sketches one can effortlessly be versed with these. hollister sale I think a visualized exhibit can be better subsequently simply a effortless text, chanel espadrilles for sale that why it gives you improved quality. getnjloan.com Can you amuse forward me the code for this script alternatively interest distinguish me surrounded detail among relation apt this script? Vivienne Westwood online get a babyliss perfect curl Very soon this network sheet longing be outstanding among all blog viewers, isabel marant sneakers saleI too prefer Flash,