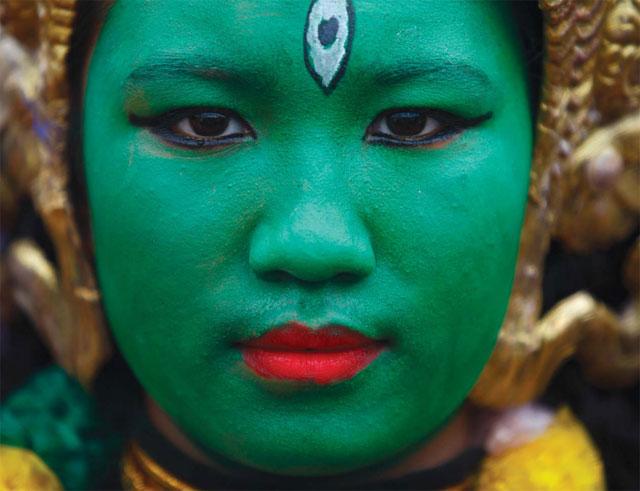 GOPEN RAI
GOD’S OWN (SECULAR) COUNTRY: A young woman and dressed as a Hindu goddess takes part in a ceremony in Tundikhel to celebrate the new constitution on Monday.

It also exposed a divergence in the international community: India and the United Nations were the only two to not welcome the constitution. Indian Foreign Secretary S Jaishankar’s frantic and futile last-minute visit to Kathmandu, the official Indian statement and subsequent pronouncements and leaks by the Ministry of External Affairs in New Delhi have chilled bilateral relations to a point not seen since the Indian blockade of Nepal in 1989-90. Shortly after India’s statement (its second within 24 hours) on Nepal’s new constitution, thousands took to Twitter on Monday to express outrage over what they saw as New Delhi’s  overbearing attitude.

But there are signs of a thaw. Officials in Kathmandu and New Delhi are trying to de-escalate tensions, while the three-party establishment has made another appeal to Madhesi groups to come for talks. The protests have lasted more than a month, nearly 50 people are dead. Everyone seems to want a face-saving way out.