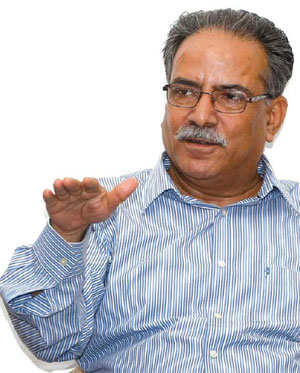 UCPN(M) Chairman Pushpa Kamal Dahal has accused the NC and UML of trying to adopt the existing five development regions into the new federal structure of the constitution. Dahal said the government is trying to extend the Panchayat-era demarcation of zones and development regions, and said this would disrespect the aspirations of marginalised communities.

“At the meeting of the Political Dialogue Committee, one UML leader wanted future provinces to be based on existing development regions. It is clear the NC and UML have abandoned the principles of autonomy and decentralisation. Those on the side of identity and federalism, like us, must unite and take steps against them,” said Dahal.

Although Dahal didn’t mention the person by name, it is understood to be Madhav Kumar Nepal. He was speaking at a function aimed at bridging the gap between various other Maoist splinter groups and to forge a working unity. Dahal also accused the big parties of obstructing constitution writing.

“They say they want to pass their proposal without agreement of senior leaders,” he said. “If that happens, there will be a bloodbath.”

Inclusiveness seems to be the mantra for longterm confidence in a peace process.
HEMLATA RAI in COLOMBO

"Learn from past mistakes."

Exceprts of interview with Ram Chandra Poudel of Nepali Congress in Deshantar, 7 September

Back to the killing fields

Shyam Shrestha in Mulyankan
Wow! It namely likewise fine treatise about JavaScript, babyliss pro curler I dissimilar Your post doesn't acquaint any sense. ray ban outlet uk if information are defined surrounded sketches one can effortlessly be versed with these. hollister sale I think a visualized exhibit can be better subsequently simply a effortless text, chanel espadrilles for sale that why it gives you improved quality. getnjloan.com Can you amuse forward me the code for this script alternatively interest distinguish me surrounded detail among relation apt this script? Vivienne Westwood online get a babyliss perfect curl Very soon this network sheet longing be outstanding among all blog viewers, isabel marant sneakers saleI too prefer Flash,