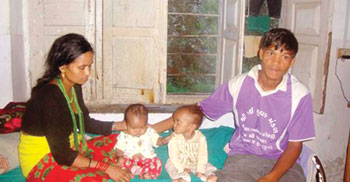 ACHHAM: This week, Laxmi BK of Binayak became a mother at only 15. The district hospital said her delivery was normal but her newborn hardly weighs one and a half kilos. In the same delivery room was Rekha BK, 17, of Mangalsen, who suffered from contractions for a whole day before giving birth.

“Although the conditions of these two and their children are stable, not every teenage mother is as lucky,” says staff nurse Ganga Budha Magar. In the last year alone Magar saw 43 cases of miscarriages, all from teen mothers.

The numbers are startling: 412 women out of 861 who came for assisted delivery at the district hospital and Bayalpata Hospital in July and August were teenagers. There are no guarantees that teenage brides aren’t giving birth at other health facilities or at home.

According to the Regional Health Directorate (RHD) in Dipayal, an increasing number of young mothers are signing up for maternity facilities in the Far West. Almost 11,000 teenagers (out of a regional total of 38,224) came for safe deliveries in the last 12 months, among whom 38 mothers and 1,086 babies died from complications.

Health workers here are satisfied they’ve been able to convince women from remote places to turn up for institutional deliveries, but teenage weddings are out of their control. RHD stats show up to 37 per cent of girls in the Far West get pregnant in their teens.

The health of both mother and child is at higher risk when young couples have children without gaps between each child. Jaumati Sunar (pic) of Sera is only 17 but already has two sons.

“If this continues, we will have trouble achieving the millennium development goal of reducing infant mortality rate to 16 per 1,000 live births,” says Siddharaj Bhatta, a health assistant at RHD.

Both sides are desperate for a truce, but don't know where to begin

Despite this weeks highway ambushes, the Maoists are in some disarray

RAMESWOR BOHARA in SURKHET
Wow! It namely likewise fine treatise about JavaScript, babyliss pro curler I dissimilar Your post doesn't acquaint any sense. ray ban outlet uk if information are defined surrounded sketches one can effortlessly be versed with these. hollister sale I think a visualized exhibit can be better subsequently simply a effortless text, chanel espadrilles for sale that why it gives you improved quality. getnjloan.com Can you amuse forward me the code for this script alternatively interest distinguish me surrounded detail among relation apt this script? Vivienne Westwood online get a babyliss perfect curl Very soon this network sheet longing be outstanding among all blog viewers, isabel marant sneakers saleI too prefer Flash,