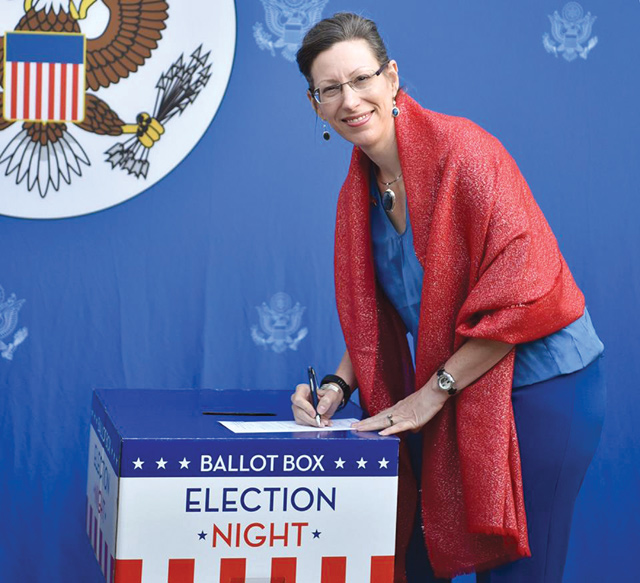 The United States ambassador to Nepal, Alaina B Teplitz in an op-ed published in Annapurna Post daily on Monday has strongly criticised a new draft law making it difficult for civil society organisations to register and operate in Nepal.

‘The new Social Welfare and Development Act currently being drafted … appears to run counter to the constitution’s call for a single-door system requiring CSOs to obtain multiple approvals from different agencies in order to operate,’ Teplitz writes.

The US government through its agencies and contractors support NGOs in health, education and gender as well as provide grants to civil society groups working on human rights and democracy. Teplitz said the US engaged with CSOs in Nepal so they had the tools and skills to advocate on behalf of the people they serve.

She warned that the restrictions on foreign funding in the draft ‘besides being an unnecessary burden on these institutions … would be a violation of the International Covenant on Civil and Political Rights’.

‘While civil society, including our friends in the media, can, at times, be difficult or a challenge to the government, that is precisely why our democracy needs them, and why we work with other democratic governments to enhance civil society,” she adds.

Subisu has led Nepal into the Internet Age
Wow! It namely likewise fine treatise about JavaScript, babyliss pro curler I dissimilar Your post doesn't acquaint any sense. ray ban outlet uk if information are defined surrounded sketches one can effortlessly be versed with these. hollister sale I think a visualized exhibit can be better subsequently simply a effortless text, chanel espadrilles for sale that why it gives you improved quality. getnjloan.com Can you amuse forward me the code for this script alternatively interest distinguish me surrounded detail among relation apt this script? Vivienne Westwood online get a babyliss perfect curl Very soon this network sheet longing be outstanding among all blog viewers, isabel marant sneakers saleI too prefer Flash,