Of monks and Maoists 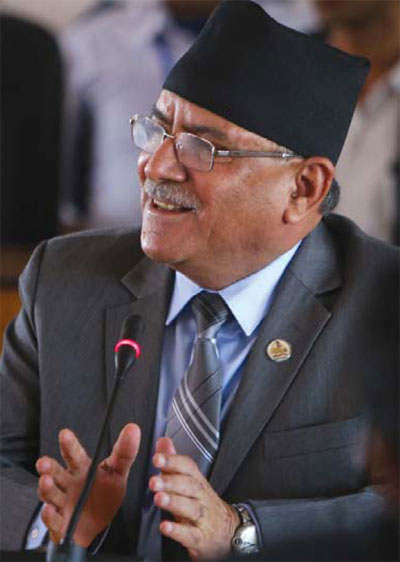 Everyone has an alter ego, and is subconsciously guided by his/her imaginary self. It seems that Maoist leader Pushpa Kamal Dahal is living with a persona who is sharp and dynamic. For him, other seasoned communist leaders like Mohan Bikram Singh, Mohan Baidya and Narayan Man Bijukechhe are not as smart.

To articulate what his alter ego thinks, Dahal recently compared these veteran communists with Buddhist monks. “They lack the urge to change society, and are just ringing bells like Buddhist monks,” he said. “I am different. I never thought that change would take place gradually.”

That analogy exposed Dahal’s lack of knowledge about Buddhism. At the same time, Dahal’s career is a blot on the Buddhist philosophy of non-violence: he took up arms as a short cut to get ahead in politics.

During his first tenure as Prime Minister, Dahal inked a deal with a little-known Chinese NGO to develop Lumbini, the Buddha’s birthplace. Dahal’s acolytes hailed him as the Buddhists’ new messiah, comparing him with Maurya emperor Ashoka, who renounced violence to become a monk. Like Ashoka, Dahal fought a brutal war. But unlike Ashoka, Dahal nevere did understand Buddhism.

Dahal thinks Nepal’s veteran communist leaders are good for nothing, like Buddhist monks. By his logic, those who have renounced worldly life to practice the teachings of Buddhism are ‘useless’. Yet, not everyone can live an ascetic life: it takes a lot of courage and conviction.

Buddhist monks do not leave their families just to escape worldly affairs. They become monks to transform their lives. They are fed up with the killing of helpless creatures, and are trying to understand the meaning of life. This is a revolutionary approach, and a politician who is responsible for the killing of thousands cannot be a monk.

Dahal has met many Buddhist leaders on various occasions, but it seems his understanding of the faith is still very limited. He thinks he is Mr Know-It-All, but he has revealed how little he actually knows. Needless to say, a little knowledge is a dangerous thing.

A climate for change

It can't be business as usual in business
NIRVANA CHAUDHARY

Ganga BC in Kantipur, 23 August

Gajendra Bohora in Nagarik, 24 August
Wow! It namely likewise fine treatise about JavaScript, babyliss pro curler I dissimilar Your post doesn't acquaint any sense. ray ban outlet uk if information are defined surrounded sketches one can effortlessly be versed with these. hollister sale I think a visualized exhibit can be better subsequently simply a effortless text, chanel espadrilles for sale that why it gives you improved quality. getnjloan.com Can you amuse forward me the code for this script alternatively interest distinguish me surrounded detail among relation apt this script? Vivienne Westwood online get a babyliss perfect curl Very soon this network sheet longing be outstanding among all blog viewers, isabel marant sneakers saleI too prefer Flash,