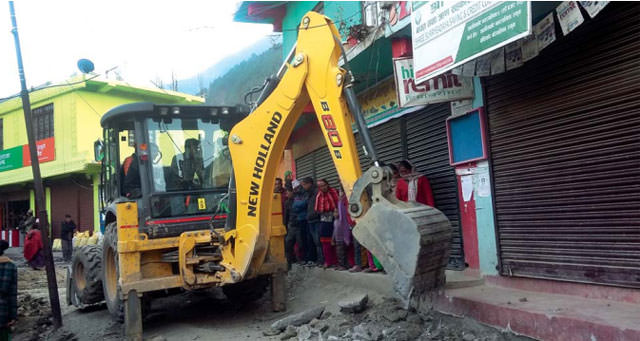 The Nepali people had great hopes that the first elected government in 20 years would bring a new wave of development, but recent trends show that many elected mayors, village heads and ward members are construction contractors. They have not divested from their companies, but instead are awarding projects to themselves, which is a clear case of conflict of interest.

“About one-third of elected representatives got themselves elected to profit from their businesses, the other one-third want to get to work but don’t know how. We have to monitor those who want to profit, and train those who want to contribute to development,” says expert on federalism and local government Khimlal Devkota.

A nationwide investigation has shown widespread conflict of interest as hundreds of elected local officials are literally awarding themselves construction contracts. According to the Federation of Contractors’ Associations of Nepal, more than 300 construction company owners were elected in last year’s local elections. There is no figure for how many are among the representatives elected to provincial and national assemblies.

For example, Yam Bahadur Malla was a well known Parbat-based construction entrepreneur, after the first phase of elections he became the Nepali Congress head of Jaljala village where he has been awarding his own Ramkrishna Construction Service and Kali Gandaki Crusher Industry company major construction projects. He ploughed money he earned from his business to get himself elected, and now has nominally transferred ownership of his company to his cousin, Indra Malla.

Said one ward chair: “He has all the excavators and bulldozers, and we have found it is easier just to use them.”

Bhim Bahadur Thapa of the NC was elected mayor of Sunwal municipality in Nawalparasi. He is also the owner of a magnesite mine in Palpa that supplies raw material to cement factories in the region. He is the owner of Tirupati Construction Pvt Ltd, and his company has got contracts to build roads.

“Thapa dominated all the sand mining and construction projects here even before elections, after he became mayor himself it has become much easier for him to get contracts,” says one ward member here.

After getting elected as NC mayor of Kusma in Parbat district, Thapa transferred the ownership of his company Suryodaya Construction Service to his personal secretary. That company is now involved in all major construction work in Kusma.

Newly-elected head Roshan Gurung of Mahashila village has hired an excavator from his own company for a construction project claiming that his rental is less than other companies. In Parbat, Bhimsen Gurung who is the head of Paiyu village is also a contractor.

The Ward chair of Butwal sub-metropolis Bhim Shrestha owns Arniko Construction Company which is building a bridge nearby.

Over in Okhaldhunga, Navaraj KC, NC chair of Champadevi village, also owns a construction company that was awarded Rs70 million for a road construction contract. In Manebhanjyang village of the same district, the NC village council chair Moti Rai has got the village to buy a bulldozer.

In Arghakhanchi, Tika Magar, Maoist chair of Sitganga Municpality, has hired his own heavy equipment for road construction. The ward members of Sitganga have also bought bulldozers and rented them out to their municipality.

In Bajura in the far-west, the NC Mayor Padam Giuri of Budinanda Municpality is the owner of Ashish Construction Service Pvt Ltd which is now building the District Police Office and a school whose construction is funded by the Indian Embassy.

The Mayor of Parsuram Municpality in Dadeldhura too is a well known construction entrepreneur, his Rajendra Construction Service Pvt Ltd has not been able to complete major construction projects in the district due to multiple breaches of contract.

The Construction Association in Sankhuwasabha brought out an ad in the local paper congratulating its members: Mayor Musari Khatiwada of the UML in Khadbari, Mayor Bidur Lingthep of the UML in Madi Municipality and village chair Pasang Norbu Sherpa.

Any civil servant who opposes the elected officials is harassed or even beaten up. Samsher Rai was transferred four months after he was brought in as an administrator to the Necha-Salyan village council in Solu Khumbu because he refused to sign the payment for past road construction by the elected village chair Duphkumar Bastola, as it had no proper paperwork.

Inputs from: Kamal Rimal in Biratnagar, Yuvaraj Shrestha in Pokhara, Durga Sharma in Parbat, Dipak Gyawali in Butwal and Laxman KC in Rukum.

Don't let me down

Mollywood goes international with epic that is India in microcosm

Some lessons from other peace processes
ELIZABETH SELLWOOD
Wow! It namely likewise fine treatise about JavaScript, babyliss pro curler I dissimilar Your post doesn't acquaint any sense. ray ban outlet uk if information are defined surrounded sketches one can effortlessly be versed with these. hollister sale I think a visualized exhibit can be better subsequently simply a effortless text, chanel espadrilles for sale that why it gives you improved quality. getnjloan.com Can you amuse forward me the code for this script alternatively interest distinguish me surrounded detail among relation apt this script? Vivienne Westwood online get a babyliss perfect curl Very soon this network sheet longing be outstanding among all blog viewers, isabel marant sneakers saleI too prefer Flash,