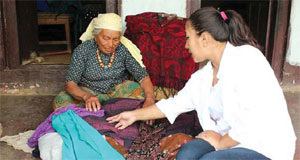 NEW YORK -- Nilima Sharma Tamang, 37, does not believe only Nepalis should wear traditional Nepali clothes. She wants to see people all over the world wearing them. She is now in the US exploring an international market for traditional Nepali attire.

After graduating from a fashion school in Kathmandu, she set up Nilima Fashion Studio and designed wardrobes for several Nepali films. She also won the best costume designer award for two consecutive years (2013-2014) from the Nepal Film Technical Association.

Encouraged by success in Nepal, Nilima now wants to establish herself in the international fashion market, but she knows it will not be easy. She toured Manhattan boutiques with samples and the response was encouraging enough for her to organise an exclusive fashion show of Nepali clothes soon in the US.

“Out ethnic diversity is reflected in the range of traditional attire, we just have to tweak them a bit for a western taste,” says Tamang. “Nepali clothes are exotic and if they become popular, it will revive the folk fabric market back home.”

Tough slog in the Khumbu

In an age of advertising

Technology and youth are energising the industry
ALOK TUMBAHANGPHEY
Wow! It namely likewise fine treatise about JavaScript, babyliss pro curler I dissimilar Your post doesn't acquaint any sense. ray ban outlet uk if information are defined surrounded sketches one can effortlessly be versed with these. hollister sale I think a visualized exhibit can be better subsequently simply a effortless text, chanel espadrilles for sale that why it gives you improved quality. getnjloan.com Can you amuse forward me the code for this script alternatively interest distinguish me surrounded detail among relation apt this script? Vivienne Westwood online get a babyliss perfect curl Very soon this network sheet longing be outstanding among all blog viewers, isabel marant sneakers saleI too prefer Flash,