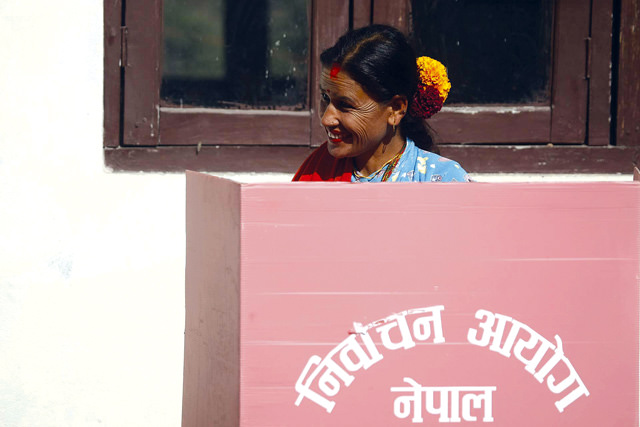 A ruinous 10-year war brutalised Nepalis and pushed the country back decades. When that conflict ended in 2006, there was great hope for a peace dividend, but the country was soon mired in an erratic 11-year transition that frayed the country’s ethnic fabric, made instability and poor governance the norm and allowed unprecedented geopolitical meddling in our internal affairs.

The end result of these 20 wasted years was that most Nepalis gave up on Nepal, and migrated by the millions. Nearly 15% of the country’s population (mostly men) is abroad today. The government has not been able to make even the most basic services affordable and accessible to those who remained behind. Remittances have not been invested in productive sectors to create jobs at home. Corruption has become so endemic that it is treated as a given. There is a criminalisation of politics and the politicisation of crime.

After travelling that long, dark tunnel, we are finally seeing a light at the end with elections to the national Parliament and federal assemblies. This week, 32 mountain and hill districts went to the polls, and the rest will vote on 7 December. That these are historic elections, there is no doubt. It marks the last stage of the peace process that started in 2006, and it will elect the peoples’ representatives to a national and seven provincial legislatures – theoretically devolving political power from Kathmandu to the periphery for the first time.

Despite confusion about the division of jurisdictions and the chain of command between the three tiers of government, we will soon have a decentralised political structure that should ideally allow local people decide on local development. One of the reasons Nepal has been held back is that the Kathmandu establishment thought it knew best what was good for people from Humla to Jhapa.

In a democracy, elections are a mechanism to select the most honest and more efficient managers to run the country for a limited time period. If they do a good job, there is a chance they will get re-elected in the next round of voting. Regrettably, the whole electoral process has been subverted in the past 27 years by top men in a cartel of parties that has used polls just to reshuffle the cards.

The first elections under the Constitution give us a chance to change that. It will be a test of how independently Nepalis will vote. Will their disillusionment with the three-party syndicate and their failed leaders translate into votes for new faces? Are Nepali voters fed-up enough, outraged enough and empowered enough to finally vote for ‘performance’ rather than ‘promises’. Or will vote bank politics, caste, ethnicity and party loyalty still determine who they vote for, despite their disillusionment with the trad-pols (traditional politicians).

Voters not just in Nepal, but elsewhere as well, tend to cast their ballots in favour of those who are sure to win. They do not want to gamble as much on untested candidates. However, the results of the mayoral race in Kathmandu in May saw a 22-year-old student from the Bibeksheel Nepali Party come out of nowhere to finish third. If Bibeksheel and the Sajha Party had joined forces, as they have done for the current polls, we may have had a mayor in Kathmandu from an alternative party by now. The question for us this week is whether popular discontent has reached that critical mass for voters to reject candidates from established parties. Not everything will change with the first election under the new Constitution. We may have to wait for two or three more for performance to become the main criteria for voting. The new Parliament may also have to push through new laws on electoral reform — from funding, transparency, provisions for absentee voting and more effective voter education to streamlining ballot papers. Cost over-runs, profligacy, political interference, and even corruption at the Election Commission have become matters for serious future consideration.

Whatever the outcome of the elections, it looks like Nepal is headed to becoming a two-party state, with most parties coalescing around the centrist Democratic Alliance and the Leftist Alliance. In the past, whenever the NC and the UML have worked together, we have seen better governance and defence of the core values of democracy, rule of law and open society. But we have also seen periods since 1990 when the rivalry between these two parties paralysed government.

After 20 years in the wilderness, Nepal now needs political stability to ensure investment, job creation and more efficient governance. Since there is no real ideological difference between the two alliances any more, what we need for stable politics is a majority government with a strong opposition to keep it in check. At this moment, that is the best we can hope for.

Heres a beginner who practises at midnight
DEEPAK ACHARYA

Canadian Ambassador to Nepal, Lucie Edwards, spoke to Nepali Times last week just before she finished her term.
Wow! It namely likewise fine treatise about JavaScript, babyliss pro curler I dissimilar Your post doesn't acquaint any sense. ray ban outlet uk if information are defined surrounded sketches one can effortlessly be versed with these. hollister sale I think a visualized exhibit can be better subsequently simply a effortless text, chanel espadrilles for sale that why it gives you improved quality. getnjloan.com Can you amuse forward me the code for this script alternatively interest distinguish me surrounded detail among relation apt this script? Vivienne Westwood online get a babyliss perfect curl Very soon this network sheet longing be outstanding among all blog viewers, isabel marant sneakers saleI too prefer Flash,