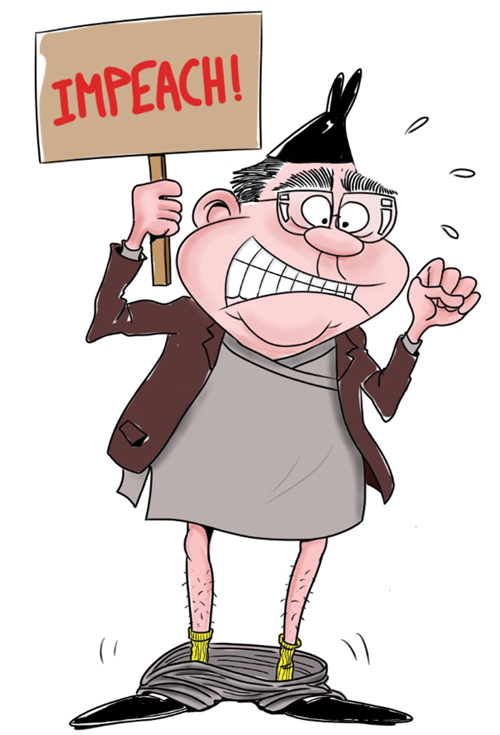 The impeachment process against Chief Justice Sushila Karki by the governing coalition this week has plunged Nepal into another political crisis, thrown impending elections into doubt, and could even lead to a constitutional void in January 2018 if those polls cannot be held.

Deuba had no love lost for Chief Justice Karki despite the fact that she was close to the Koirala clan while growing up in Biratnagar. In fact, Karki’s husband Durga Subedi was a member of the team that hijacked a Royal Nepal Airlines plane carrying a stash of cash to Kathmandu, landing it in India to use the money to fund the party’s pro-democracy campaign.

It is indeed this country’s great misfortune that a party that was once a respected member of the international social democratic movement, led several successful pro-democracy campaigns, one whose leaders have sacrificed their lives for an open society, the rule of law and the separation of powers, should be the one that is dealing this unprecedented and possibly fatal blow to Nepal’s democracy.

The latest sign that the NC has abandoned its remit was that party General Secretary Sashank Koirala (son of the great BP) said last month that 'the judiciary should be answerable to parliament’. A cabal within the NC was getting increasingly irritated by the fact that one of their own was, as Chief Justice, passing judgments in the Supreme Court against the party’s interests.

The NC was conspicuously muted in its criticism of Lokman Singh Karki’s abuse of authority after his appointment in 2013. It was only when the former CIAA chief started hounding the top political leadership last year that Parliament lodged an impeachment motion which the NC reluctantly supported. But since then, several verdicts by the Supreme Court have directly challenged the party, the latest being Karki’s ruling to stay the appointment of Jaya Bahadur Chand as police chief and the appointment of Nabaraj Silwal to the post.

Chief Justice Karki may be accused of overstepping her jurisdiction or overlooking Silwal’s own qualifications, but there were strong indications that Chand was being promoted over more experienced colleagues due to direct intervention by Sher Bahadur Deuba. Silwal’s writ in the Supreme Court was being heard on 2 May, and it seems to be no coincidence that the impeachment motion was registered late in the evening of 30 April so that Justice Karki would automatically have to step down.

But Sushila Karki did not go meekly away. Her last verdict, an hour or so before the impeachment motion was lodged up the road in Parliament on Sunday, was to find three ex-IGPs guilty in a kickback scam involving the purchase of armoured personnel carriers for Nepali UN peacekeepers in Sudan. She had showed similar gumption last year, at a time when most politicians were cowering and the media had been silenced, by ruling against the appointment of Lokman Singh Karki. In fact, the Supreme Court acted even while Parliament waffled on carrying through with the impeachment motion.

The irony of all this, of course, is that the same Parliament that started an impeachment motion against one Karki (Lokman) has now tried to hound out another Karki (Sushila). Yet the background to the two impeachment proceedings within six months couldn’t be more different. One was notorious for the abuse of authority that he was supposed to be vigilant about, the other was a fearless, independent and incorruptible judge who was the embodiment of Lady Justice in Nepal.

Other factors were also at play to hasten the impeachment motion. Deuba just couldn’t handle the fact that a woman his party was close to was standing up to him. His fragile ego was hurt, and he might have believed rumours that Karki was hauling him in for contempt of court. There were also several other verdicts on corruption cases that the Supreme Court was ruling on before Karki retired in June that would have been damaging to the party.

Deuba found a willing partner in Prime Minister Dahal, who had been alarmed by a recent Supreme Court order to arrest Bal Krishna Dhungel for his complicity in a war-time murder case. And the Nepal Army could have been spooked by her ruling on the Maina Sunar murder in which several officers were implicated.

Clearly, Karki had ruffled a lot of feathers. It may just be that she was too honest and too impervious to threats and intimidation for the corrupt political cartel that runs this country to tolerate. The executive and legislative branches have now brought down the remaining pillar in Nepal’s democracy that was still standing upright, the judiciary. Now, there is only the press left.

The kakistocracy, From the Nepali press

Deuba's fall from grace, From the Nepali press

2002 was the most violent year in our history.
BHAGIRATH YOGI

Excerpt from editorial in Spacetime, 10 February
Wow! It namely likewise fine treatise about JavaScript, babyliss pro curler I dissimilar Your post doesn't acquaint any sense. ray ban outlet uk if information are defined surrounded sketches one can effortlessly be versed with these. hollister sale I think a visualized exhibit can be better subsequently simply a effortless text, chanel espadrilles for sale that why it gives you improved quality. getnjloan.com Can you amuse forward me the code for this script alternatively interest distinguish me surrounded detail among relation apt this script? Vivienne Westwood online get a babyliss perfect curl Very soon this network sheet longing be outstanding among all blog viewers, isabel marant sneakers saleI too prefer Flash,