The girl can’t help it 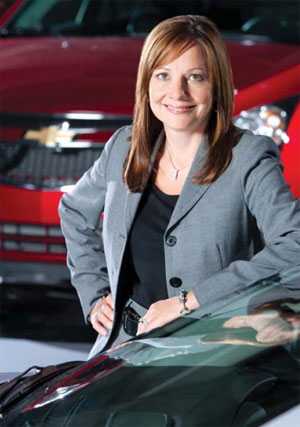 COURTESY: GENERAL MOTORS
When Mary Barra (pic, right) was named CEO of General Motors last December – the first woman to head a major American automaker – it seemed to many to be a milestone in women’s struggle for equal rights and opportunities. But in a climate in which, as Catalyst, the feminist glass-ceiling watchdog, points out, only 4.2 per cent of US Fortune 500 CEOs are women, is Barra’s promotion really a victory?

One way to answer that question is to consider who is doing the judging. In the United States, by one count, two-thirds of professional journalists are men and they account for almost 90 per cent of bylines in economics and business reporting in traditional media. In fact, the reflexive worldview of male-dominated business-news coverage invalidates all talk of a victory, whether for Barra or for the rest of us – including impressionable 15-year-old girls seeking role models and a message of empowerment.

Many news stories about female CEOs and other high-achieving women are coded with a set of reliable clichés: they lucked into their new roles (and thus do not deserve them), inherited them from male relatives or spouses (and thus do not really hold the reins of power), or will not be there for long. If all else fails, coverage concentrates so narrowly on gender that a woman’s very leadership is weakened.

These clichés not only undermine successful women’s reputations; in the case of CEOs, they also reduce their value to their companies. And all of these clichés were reproduced in the coverage of Barra’s appointment at GM.

For example, CNN covered the story  by referring to Barra’s “knack for climbing the corporate ladder” – a phrase with some suggestive undertones and one that would never be used with a man at the top.

The New York Times  led with Barra’s father and its headline suggested that she was “born to” her role, as if ambition and hard work had nothing to do with her ascent. It notes the car her husband drives and describes her as “soft-spoken.” And it includes an excruciating quote from her predecessor, Daniel F Akerson: “Mary was picked for her talent, not her gender.” It is difficult to imagine a black male middle-aged CEO (Barra is 51) being introduced to reporters with the assurance that “he was not picked for his race.”

Then there is the ‘Potemkin CEO’ approach, which implicitly assumes that powerful men would never really choose a woman to lead an important institution. According to this cliché, Barra’s promotion must be a public-relations ploy, with men retaining the real power behind the façade. So we get this headline from Fortune magazine: “Is GM’s Board Setting up Mary Barra to Fail as New CEO?” The article goes on to explain that being surrounded by male rivals for her job may fatally weaken Barra, as if male CEOs were not also surrounded by would-be rivals.

Perhaps that is because she really is just a lady first, not a manager. An interview  in The New York Times’ business section manages to focus the entire discussion on how things have changed for women at GM, rather than on what Barra intends to change at the company as CEO, or even on how things have changed in the car industry – surely an important question. The interviewer even asks at the end whether her husband is a GM employee.

I cannot fathom why serious journalists commit such egregious breaches of basic professional norms of fairness and impartiality. When they do, they are performing the role of guard dogs of an endangered patriarchy, defending – and thus strengthening – the glass ceiling.

Nepal Samacharpatra, 26 June
Wow! It namely likewise fine treatise about JavaScript, babyliss pro curler I dissimilar Your post doesn't acquaint any sense. ray ban outlet uk if information are defined surrounded sketches one can effortlessly be versed with these. hollister sale I think a visualized exhibit can be better subsequently simply a effortless text, chanel espadrilles for sale that why it gives you improved quality. getnjloan.com Can you amuse forward me the code for this script alternatively interest distinguish me surrounded detail among relation apt this script? Vivienne Westwood online get a babyliss perfect curl Very soon this network sheet longing be outstanding among all blog viewers, isabel marant sneakers saleI too prefer Flash,