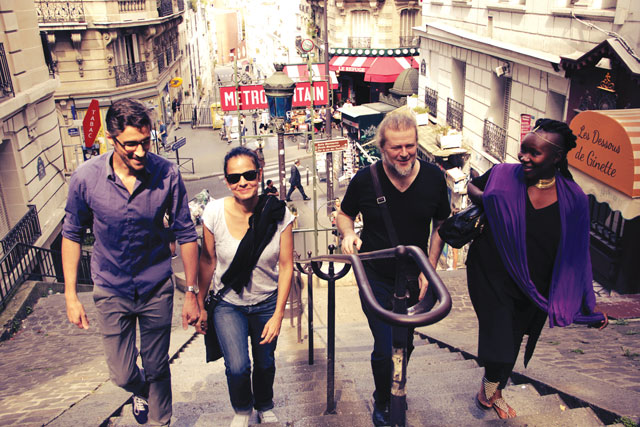 The members of the Julia Sarr Quartet see themselves as having three main things in common: a grounding in jazz music and performance, their shared home of Paris and a strong enthusiasm for bringing the sounds of West Africa to Nepal’s Jazzmandu festival this year.

With a set list of original Sarr songs, primarily from her debut solo album Daraludul Yow released in 2014, the musicians will collaborate for the first time at Jazzmandu, bringing a new twist to Sarr’s music and a range of musical experiences to their performances.

Sarr will take the stage alongside pianist Fred Soul, who also arranged the instrumentals of her album, percussionist Julie Saury and bassist Bruno Schorp, each of whom composes their own original work.

Sarr, who moved to Paris from Senegal at 13, sings originals in her native Wolof language, melding the sounds of West Africa with jazz influences while preserving her own culture and language.

She has collaborated with a mix of highly acclaimed jazz musicians, including Youssou N’Dour and Patrice Larose, and is widely sought after as a backing vocalist. She describes her first album, Set Luna, in collaboration with Larose, as “an encounter with guitar, flamenco, and French” influences, while her solo album was a “long journey” in which she had the chance to create original work.

“If you do backing vocal, you serve the music of someone. You must be humble just to give the best of your skill and work,” said Sarr, in conversation with her band mates soon after arriving in Kathmandu. “It’s more emotional when you perform your own work, your song and your own history. It’s a different approach. Going live is transferring your feelings to the people,” she told Nepali Times.

Living in Paris, where musicians hail from many countries and work in myriad languages, the possibilities for making music are immense. “Paris is a capital with lots of magic, every kind of culture and race,” Sarr says. “We deal very easily as we can learn different cultures from all over the world.” “Singing in the Wolof language is the most important thing for me,” she added.

Sarr says “the flavour of the song” is at the core of her song-writing process. “A song is like a remedy. When I write songs, I bring in my childhood memories in Africa, the idea of being exiled and the experience of living far from our country, of being detached from your roots and creating your new roots.”

Sarr and Soul are making their Jazzmandu debut, while Saury and Schorp have each performed three times at the festival since 2009.

Julie Saury continues to return with various artists because she has fallen in love with Nepal: “The most exciting part for me is to play with Nepali musicians.”

Matthew Kahane is the United Nations resident coordinator in Kathmandu.