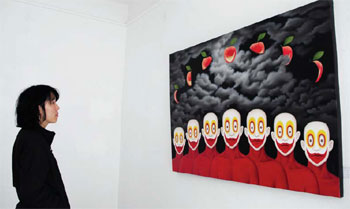 TOH EE MING
Anil Shahi’s Smile with me and Sujan Dangol’s Through my stories, are the fourth installation in the series produced by winners of the Australian Himalayan Foundation Art Award. Both are being exhibited at the Siddhartha Art Gallery.

Centred on the artists’ interpretation of the various facets of human life, each painting highlights an individual’s personal struggles as well as the social, and in Nepal mostly political, contexts within which they occur and must be dealt with.

Although both Shahi and Dangol’s paintings are shown together, the stylistic approach between the two couldn’t be more different. Shahi’s paintings, like Smile with me and Inside out, focus on appearance and reality. He uses masked figures of the Joker, symbolising humour and laughter, with faces tainted with red. A superficial smile plastered on a raging person illustrates the multiple levels on which humans must operate. Never mind inner angst, Shahi seems to suggest, we must constantly put up an act to hide our vulnerabilities and show whoever is watching that we are strong enough to shield ourselves. His canvases narrate the stories of lost souls who have been transformed into clowns in their own circuses and are bound to constantly put on a show (pic, above). 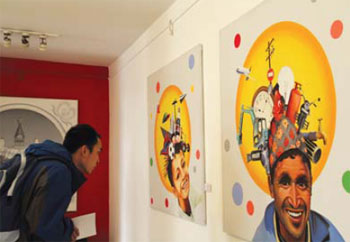 If Shahi’s paintings appear as stand-alone statements, Dangol’s work is presented as a series loosely strung by a tendency to narrate different stories. One titled Three generations, often-seen in the flesh if you traverse through the inner gallis of old Kathmandu, deals with the passing of time in terms of human condition. Each painting also depicts its subjects’ immediate concerns. A portrait of a young boy has coca-cola and spiderman, a man in a topi yearns for water, employment and electricity (pic, far right). The weathered face of a grandmother stares back at the viewer, a wrecked car hints at the futility of aspiration.

Together, the series highlights the transition of life from childhood to adulthood and ultimately to old age and how perspectives and aspirations change with time.

Proceeds from the sale of two paintings from each exhibition will be designated for future artists in affiliation with the Australian Himalayan Foundation.

‘Smile with me’ and ‘Through my stories’

An exhibition of Anil Shahi and Sujan Dangol’s paintings

One of the best resources on Sherpa culture produced so far

A season of often heart-rending documentary films define the myriad challenges ahead
A. ANGELO D'SILVA

If it were men who had unwanted pregnancies, there wouldn't be such a big debate about abortion
REKHA THAPA

Forget the NRNs, let's protect our NWAs
CK LAL
Wow! It namely likewise fine treatise about JavaScript, babyliss pro curler I dissimilar Your post doesn't acquaint any sense. ray ban outlet uk if information are defined surrounded sketches one can effortlessly be versed with these. hollister sale I think a visualized exhibit can be better subsequently simply a effortless text, chanel espadrilles for sale that why it gives you improved quality. getnjloan.com Can you amuse forward me the code for this script alternatively interest distinguish me surrounded detail among relation apt this script? Vivienne Westwood online get a babyliss perfect curl Very soon this network sheet longing be outstanding among all blog viewers, isabel marant sneakers saleI too prefer Flash,