Nani Maiya and baby survived a Maoist attack 13 years ago in which her husband was killed. This week she had to congratulate the Maoist in-charge who won the election.
Amrit Gurung 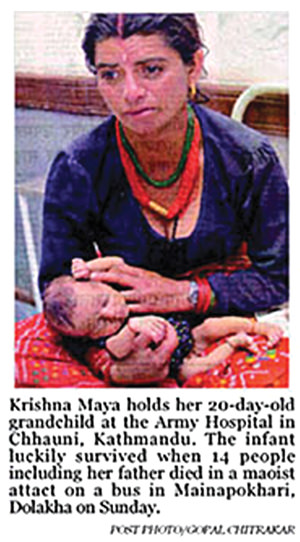 SONG OF LOSS AND HOPE: Krishna Maya with her 20-day-old grand-daughter Sona in a picture in the Kathmandu Post taken by Gopal Chitrakar at Chhauni Military Hospital after the family was airlifted from Mainapokhari by helicopter on 9 May 2004 after the firefight.

I revisited Dolakha last week to meet Nani Maiya Kafle and her daughter Sona, about whom I had composed a song that told the story of a tragic event during the conflict.

Sona, just 20 days old, was travelling with her parents in a bus from Jiri to Kathmandu on 9 May 2004. When they reached Mainapokhari of Dolakha the bus suddenly stopped at a Maoist roadblock. Soldiers in civvies were travelling in the bus, and fearing they would be found out, started shooting at the Maoists.

The firefight was brief, but at the end of it at least 15 people were killed, 7 of them civilian passengers. The family of English teacher Sobendra Kafle, his mother Krishna Maya, wife Nani Maiya and baby Sona, were trapped inside the bus.

As bullets ricocheted all around, Nani Maiya pushed Sona under the seat in the driver’s cabin and ducked. When the shooting finally stopped, Nani Maiya, herself wounded, found her daughter. But her husband Sobendra was lying lifeless in a pool of blood.

The Maoist insurgency was at its peak, and our Nepathya band was in Birganj on a Peace Concert Tour that week when I came across Nani Maiya’s poignant story in Kantipur, written by Rajendra Manandhar with a photograph by Gopal Chitrakar of Sona in her grandmother’s lap at Chhauni Hospital.

My promoter Kiran Krishna Shrestha and Arpan Sharma of nepa~laya immediately tracked down Nani Maiya and we drove to Dolakha. The trip was risky because the highway had many Army and Police checkpoints, and between them there was no government presence.

As we approached Mude, we passed the Horse Shoe Resort, run by Mohan Khatri who was hacked to death by the Maoists in 2002. The charismatic retired major was popular in the area for building schools and health posts, but the Maoists suspected he was a spy. We passed his van, burnt and abandoned in Mude. 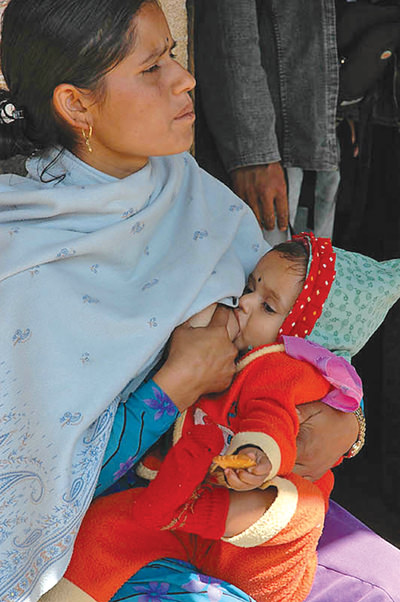 We then picked up Rajendra Manadhar in Charikot and drove down to the Tama Kosi and up the other side to Mainapokhari. There were still blood stains on the asphalt where the firefight took place. Such was the fear that no one wanted to speak to us, but a group of children innocently told us all the details. They took us to see the bullet-ridden bus, which still had bits of abandoned clothing. 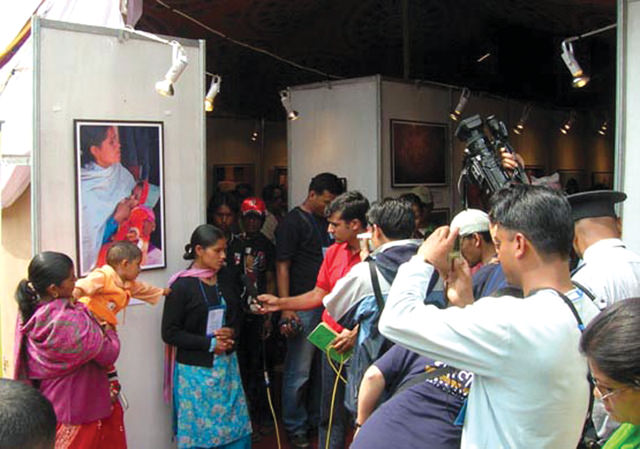 Once I got back, I collected my thoughts and started composing and recording the 25 minute folk-rock ballad that was released as the title track of the album Ghatana, in 2005. We performed this song as our opening act in concerts in Nepal and abroad in the year that followed. Audiences were visibly moved because it was a vivid musical portrayal of the tragic reality of Nepal at the time. 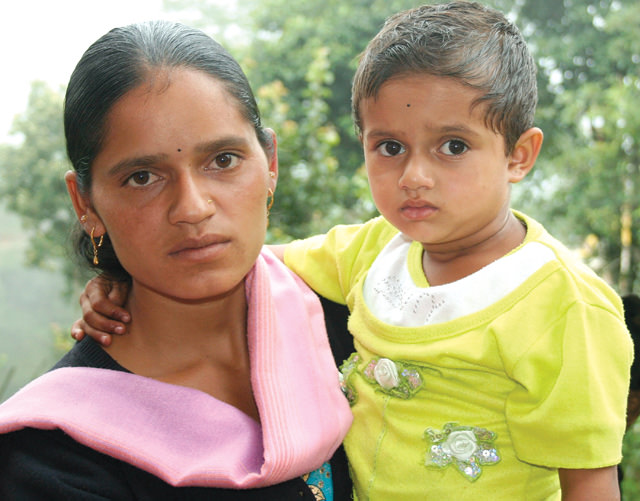 RAJENDRA MANANDHAR / people after war
Rajendra Manadhar's photograph of Nani Maiya and Sona was included in a follow-up book of conflict images, People After War, published in 2010.

I met Nani Maiya and Sona for the first time in 2005 in Charikot, during our Sundar Shanta Nepal Peace Concert Tour. Ever since, whenever in Dolakha I have made it a point to see them, including during the inauguration of nepa~laya’s A People War Photo Exhibition tour in 2007. Rajesh KC's portrait of Nani Maiya breastfeeding two-month-old Sona was included in the book on which the exhibition was based.

Kiran and I offered to sponsor Sona’s education in a boarding school in Kathmandu, but Nani Maiya was reluctant to let her daughter go. We then arranged for her to accompany her daughter and work and live in the same school. She refused this offer as well.

Last week, Kiran and I travelled to Charikot to meet Nani Maiya and hand over the financial support we had promised her. Sona is now a bright 13-year-old in Grade 6. Nani Maiya is still a teacher. She said she regretted not taking up our offer to work in the city. “Kathmandu may be dirty and crowded, but it would have been far safer than the village,” she said. 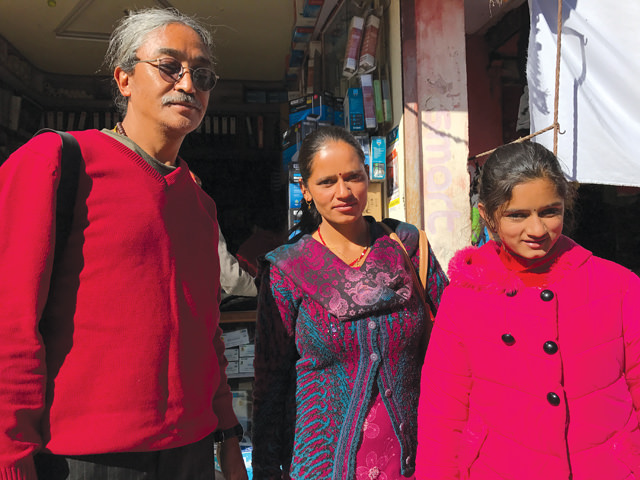 kiran krishna shrestha
Amrit Gurung with Nani Maiya Kafle and Sona in Charikot last week — 13 years after he composed a folk-rock ballad about the shootout in Mainapokhari in which Nani Maiya's husband, Sobendra, was among 15 people killed.

We wondered why she said the village was not safe but then learnt that the Maoist guerrilla commander at the time of the Maina Pokhari encounter, Comrade Bishal, had just been elected to the provincial assembly. After the election results came out, the winners of the Left Alliance organised a victory rally in the village. Nani Maiya was asked to congratulate the victorious candidates. She garlanded Parvat Gurung and Pashupati Chaulagain of the UML, but when it was the turn of Comrade Bishal her hands shook, and tears rolled down her cheeks.

“For a moment I was overcome with emotion, and I froze,” Nani Maiya recalled. “I finally put the garland on him, and couldn’t believe how I brought myself to congratulate a person whose party was responsible for my husband’s death. I hope we never have to see another war: I don’t wish it on anyone to experience what I went through.”

We passed Mude again on the drive back to Kathmandu. The Horse Shoe Resort looked run down, but the surrounding scenery is still as stunning as when Major Mohan Khatri and Sobendra Kafle lived among these mountains.

No answers, From the Nepali Press

The Philippines is stuck in no-war, no-peace
KUNDA DIXIT in MANILA
Wow! It namely likewise fine treatise about JavaScript, babyliss pro curler I dissimilar Your post doesn't acquaint any sense. ray ban outlet uk if information are defined surrounded sketches one can effortlessly be versed with these. hollister sale I think a visualized exhibit can be better subsequently simply a effortless text, chanel espadrilles for sale that why it gives you improved quality. getnjloan.com Can you amuse forward me the code for this script alternatively interest distinguish me surrounded detail among relation apt this script? Vivienne Westwood online get a babyliss perfect curl Very soon this network sheet longing be outstanding among all blog viewers, isabel marant sneakers saleI too prefer Flash,