Instead of tearing down damaged Rana-era buildings, turn them into heritage hotels to give tourism a boost
Sahina Shrestha 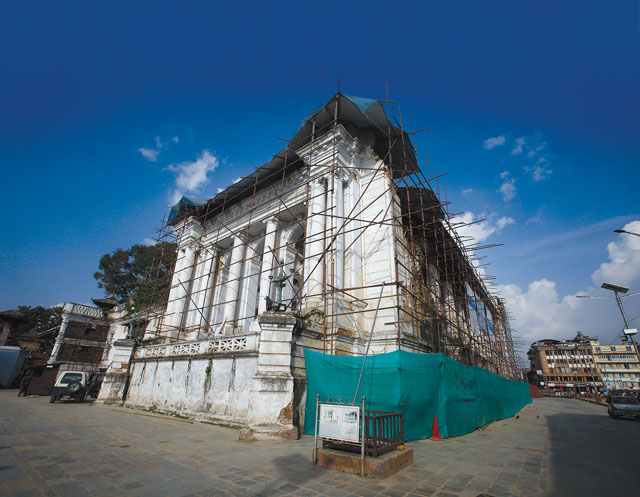 Pics: Gopen Rai
The Gaddhi Baithak at Hanuman Dhoka, which was devastated by the 2015 earthquake, is now being restored in partnership with the US Ambassador's Fund for Cultural Preservation.

Following intervention from the National Reconstruction Authority (NRA), a seven-member committee was formed and in September, the NRA called for expressions of interest from Nepali firms to retrofit the imposing main facade of the enormous complex completed by Prime Minister Chandra Shumshere Rana in 1908.

“We are trying our best to save the old palaces as they are an integral part of our heritage,” NRA chief Govind Raj Pokharel told Nepali Times. “As far as possible, we will try to retrofit the buildings instead of demolishing them.” 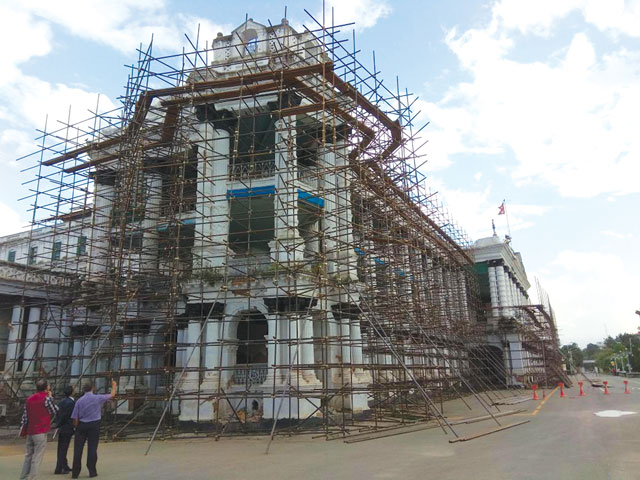 Govinda Pokhrel
The imposing Gallery Baithak in Singha Darbar was scaffolded after the NRA and heritage activists opposed the government's plan to demolish the historic faҫade.

While Singha Darbar was saved, the Thapathali Darbar and Lalita Niwas, which housed the head office of Nepal Rastra Bank and were badly damaged, were demolished two years after the 2015 earthquake.

While efforts have focused on saving Kathmandu Valley’s Malla-era monuments, the damage to stucco palaces, built by the Ranas copying the style of Victorian England more than 100 years ago, have been neglected. Critics say the government’s motivation is to let the damaged buildings crumble so that they can be torn down and replaced with concrete blocks.

“It was a mistake on the part of the government to demolish the buildings and reconstruct them from the ground up,” says Chanda Rana, an environmentalist turned heritage conservation activist, who has been working to save the palaces of her ancestors. “They should have at least tried to save whatever was salvageable from both the buildings.” 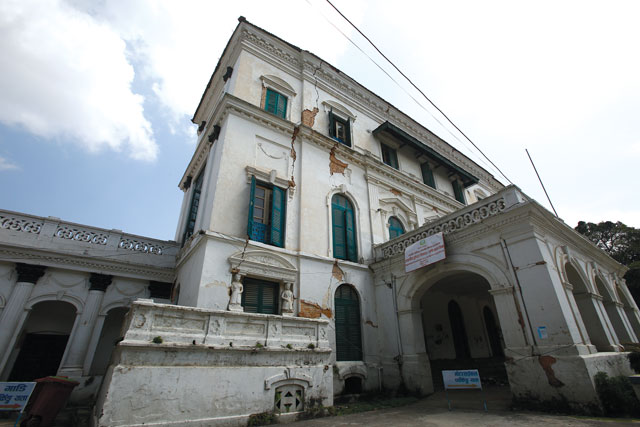 The tottering faҫade of Sri Mahal in Pulchok is in a state of disrepair, while officials debate whether to restore or demolish it.

Following the earthquake, there has been a vigorous debate on whether to reconstruct or retrofit Rana palaces. In a bid to save the buildings, the NRA is now planning to turn some of them into heritage hotels under a public-private-partnership (PPP) model.

“At the moment it is just an idea and nothing has been decided yet. We will be holding meetings with stakeholders to discuss this idea and only then we can proceed,” Pokharel added. First built in the 1900s, the grand, white, stucco Rana palaces with their neoclassical designs stood out from the temples and Malla-era palaces of intricate wood carvings and red bricks. For the next 100 years they dominated Kathmandu’s skyline. 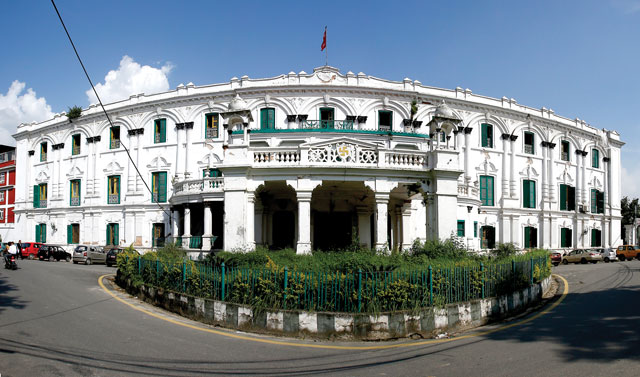 Babar Mahal, which housed the Department of Roads, will be restored. Although the department moved to Chakupat, Lalitpur, the building in Babar Mahal was only recently covered with a tarp.

When the oligarchy was overthrown in 1951, many of the lavish palaces were converted into government offices. Without proper maintenance over the years, many were damaged in the earthquake and, three monsoons later, they have fallen into neglect and disrepair.

Activist Rana is positive about the NRA proposal: “The government had decided that if the cost of retrofitting was more than 30% of the original cost of construction, it would demolish the palaces. This meant that most of the palaces that could have been saved would have been torn down. So, the NRA’s plan to preserve and retrofit the palaces and turn them into hotels is welcome news.”

Rana’s grandfather Dilli Jung Thapa was the chief engineer of many of the Rana palaces, including Sita Bhawan and Lalita Niwas. 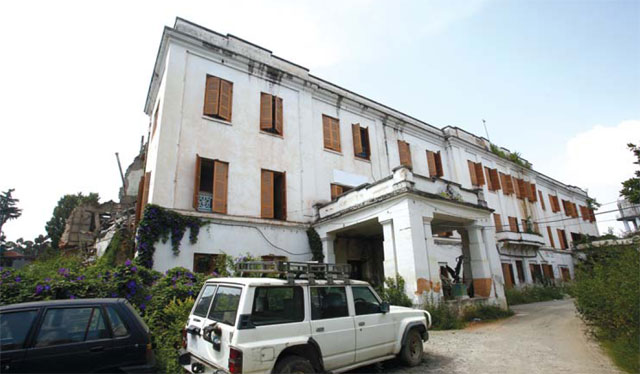 Harihar Bhawan in Lalitpur, which houses the Nepal Human Rights Commission, is set for demolition. Although the NRA instructed all damaged structures to be protected from rain, this one fell through the cracks.

NRA Chief Pokharel says if the talks with stakeholders and private sector goes well, he will push the proposal to the Cabinet for endorsement: “Many countries in Europe and even India have adopted this model, and during his recent visit to India the Prime Minister also stayed in a heritage hotel. So we are hoping for a positive response from him as well.”

Hotel Shanker is an example for others 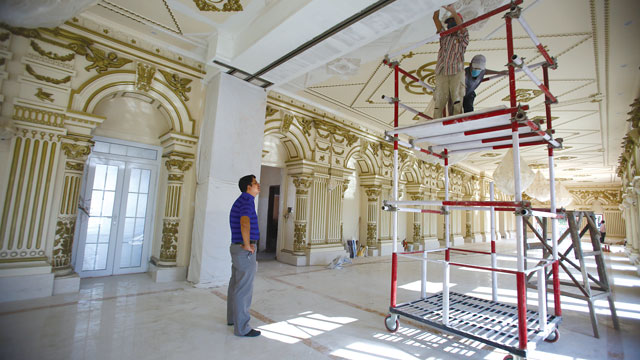 Shanker Hotel in Lazimpat is an example of a palace-turned-hotel, and conservationists say the model could be replicated. Shanker was converted into a luxury hotel in the 1960s, keeping the façade intact and redesigning the interior to match visitors’ needs and retaining other spaces in their original form.

The 2015 earthquake damaged Hotel Shanker’s facade and roof, and the proprietors entrusted the rebuilding to the grandsons of the workers who had done the original conversion. To retain the originality, the workers used old photographs as reference. Most of the repairs are now complete. “Heritage hotels have more value. People come to Nepal to see the local heritage and experience the local culture, so keeping heritage alive is a big plus point in the business,” says Prabhu Shanker Shrestha, executive manager at Hotel Shanker.

His Majesty King Gyanendra speaking to select editors last week at the royal palace and quoted in Nispakshya, 31 May

Kantipur, 31 May
Wow! It namely likewise fine treatise about JavaScript, babyliss pro curler I dissimilar Your post doesn't acquaint any sense. ray ban outlet uk if information are defined surrounded sketches one can effortlessly be versed with these. hollister sale I think a visualized exhibit can be better subsequently simply a effortless text, chanel espadrilles for sale that why it gives you improved quality. getnjloan.com Can you amuse forward me the code for this script alternatively interest distinguish me surrounded detail among relation apt this script? Vivienne Westwood online get a babyliss perfect curl Very soon this network sheet longing be outstanding among all blog viewers, isabel marant sneakers saleI too prefer Flash,