Wong Shiao Leung was holding up a pair of brogues, describing them for a customer at his shop in Bag Bazar, when he was interrupted by his youngest daughter. They had a brief conversation in Hakka, spoken mainly in southern China.

Wong’s ancestors migrated to India from China more than 150 years ago, and his father moved from Kolkata to Kathmandu during the 1962 Sino-Indian war during which many Chinese in India were taken to internment camps. The Chinese family has been preserving its roots by continuing to make leather shoes and speaking Hakka.

“Nationality is without borders, whereas language is one’s identity,” says Wong, 41, who was born in Kathmandu. “We feel lucky that we weren’t forced to uproot ourselves from our culture like many in Assam and Calcutta after the war.”

After arriving in Nepal, the Wongs resumed the family craft of shoe-making, opening a retail shop in Bagbazar: Wong & Co Chinese Shoes which sells men’s dingo boots, brogues, chain boots, uniform boots and Chelsea boots. Several other handmade designs are available for men but female leather shoes are by custom order only. To cater to other customers, Wong now also imports 20% of his wares from China. 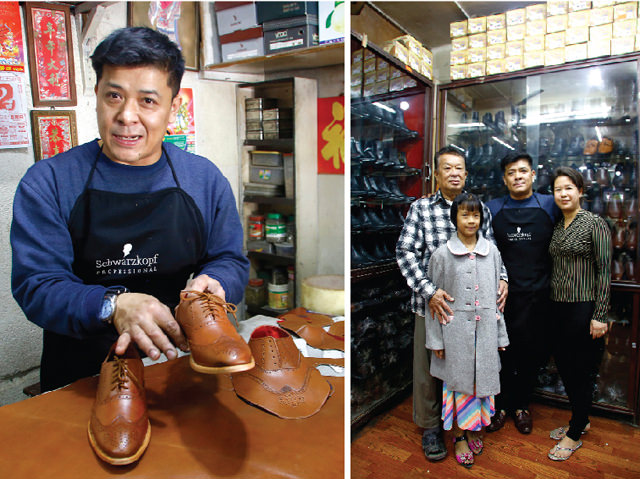 People in Kathmandu still have little knowledge about handmade leather shoes and don’t trust local products, and Wong has noticed the younger generation prefers style over durability, which makes his business more difficult. “Handmade leather shoes are slightly more expensive than readymade ones because of their quality and durability. Even the sole has to be handmade,” he explains.

If imported, a pair of genuine, leather brogues costs at least US$100. At Wong’s the same quality shoes are available for less than US$60, including a one-year warranty. The shoemaker is not ready to compromise on quality. Although his sales have gone down over the last decade, he is committed to continue making quality products, and is optimistic: “People don’t trust the local products now, but they will eventually.”

Wong is prepared to expand his business, but his status in Nepal won’t permit it. Although he was born here, he is unable to get Nepali citizenship because his father was born in India. “I have plans to expand the business by buying a piece of land and exporting shows, but I can’t because I don’t have Nepali citizenship,” he says.

Wong pays monthly taxes to the government and has employed more than 20 people in his factory in Kalanki. He says he can easily get Indian citizenship if he returns to India, but he wants to stay in Nepal: “I have called Kathmandu my home my whole life and I want to live the rest of my years here.”

Is this the new frontline?
NARESH NEWAR

Kathmandu Mayor Keshab Sthapit in Janadharana, 24 January
Wow! It namely likewise fine treatise about JavaScript, babyliss pro curler I dissimilar Your post doesn't acquaint any sense. ray ban outlet uk if information are defined surrounded sketches one can effortlessly be versed with these. hollister sale I think a visualized exhibit can be better subsequently simply a effortless text, chanel espadrilles for sale that why it gives you improved quality. getnjloan.com Can you amuse forward me the code for this script alternatively interest distinguish me surrounded detail among relation apt this script? Vivienne Westwood online get a babyliss perfect curl Very soon this network sheet longing be outstanding among all blog viewers, isabel marant sneakers saleI too prefer Flash,