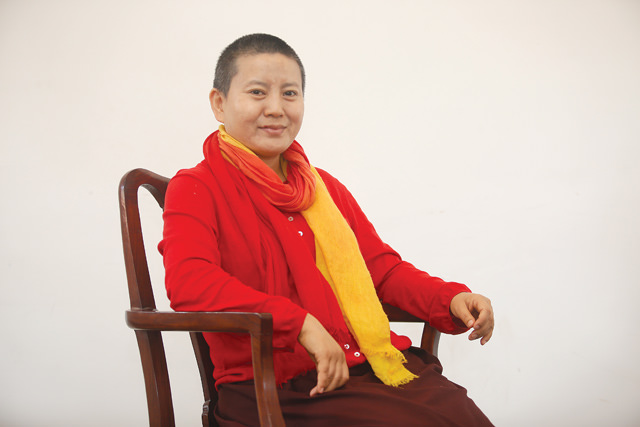 The 2015 earthquake shook up Ani Choying Drolma, quite literally. She was thrown about a room of her 12-storey apartment in Bansbari, forcing her to take stock of her life so far.

And what a life it has been. When Nepali Times profiled her in 2003, she was not yet the superstar nun that she is today. Her Buddhist mantras were just starting to become popular, she was beginning to build an international reputation, and she had not yet written her memoir, Singing for Freedom, which has now been translated into 14 languages.\

Nearly 15 years on, Nepal’s famous Singing Nun has fulfilled most of her ambitions. She is at the pinnacle of her musical career, performing all over the world to raise money for her school for nuns in Pharping, for a kidney hospital and for many other charities. She is a household name in Nepal, and passersby wave as she drives past at the wheel of her sleek silver SUV.

“The earthquake woke me up: I realised I had too many possessions, too many attachments. I was travelling too much outside. I now want to journey inside and retreat into myself,” Ani Choying tells us in a candid interview this week before back-to-back concert trips to Beijing and California.

A health scare was also a warning to Ani Choying to detoxify and yearn for inner peace. Yes, even nuns seem to need such introspection. The past decade-and-a-half has been a whirlwind of singing, writing, performing, and non-stop fundraising.

Yet, she does have a sense of fulfillment about what she has achieved to bring spiritual wellbeing and tranquility to millions in Nepal and around the world with her songs.

It was the soothing combination of her mellifluous voice, the lyrics of poet Durga Lal Shrestha and the music of Nhoo Bajracharya in her hit song Phulko Ankha Ma that launched Ani Choying’s career. Sales of the album helped her complete the Arya Tara nunnery in Pharping. The song is famous not just in Nepal: it is being translated and sung in Hindi (by Gulzar) and German, and she has young fans singing it to her in Nepali in Vietnam, Thailand and Switzerland.

“When I started, singing was just a hobby: I never imagined that my music would be all over the world,” says Ani Choying.

During her concert tours, Nepal’s singing nun is approached by fans who tell her how her music has changed their lives. Like an American Muslim soldier who had served in Afghanistan and had such severe post-traumatic stress he could not sleep at night. One day while walking on a New York sidewalk, he heard the strains of such soothing music that he followed the sound to a Nepali handicraft shop. It was the Karuna Mantra from Ani Choying’s album. He bought the CD, and told her on a recent visit that it has calmed him, and he is sleeping better.

At a dinner hosted by the owner of WeChat in Shanghai recently, a woman told Ani Choying she played her Karuna Mantra during a difficult delivery and “half the pain went away”. After almost every concert, fans mob Ani Choying to tell her stories of how her music helps them cope with the stress of modern life: women tell her how the music has made it easier to deal with a messy divorce, and in Nepal she has heard there are countless stories of how much Phulko Ankha has changed young peoples’ outlook towards life.

Ever since her Coke Studio concert with AR Rahman, Ani Choying’s popularity in India has grown, and fans recognise her at airports when she travels there. Now, Bollywood has taken notice and Ani Choying is organising the Songs of the Himalayas concert in Kathmandu on 19 November with stars like Shantanu Moitra, classical vocalist Kaushiki Chakraborty, flutist Ashwin Srinavasan and sitarist Purbayan Chatterjee flying in to Kathmandu pro bono to help Ani with her Arogya health centre.

She says: “I feel blessed that Bollywood composers are interested and willing to help, and I am really excited about being on stage with them.”

Songs of the Himalayas with Ani Choying Drolma and Shantanu Moitra

That which gives can also take away
ARTHA BEED

Sanghu, 9 January
Wow! It namely likewise fine treatise about JavaScript, babyliss pro curler I dissimilar Your post doesn't acquaint any sense. ray ban outlet uk if information are defined surrounded sketches one can effortlessly be versed with these. hollister sale I think a visualized exhibit can be better subsequently simply a effortless text, chanel espadrilles for sale that why it gives you improved quality. getnjloan.com Can you amuse forward me the code for this script alternatively interest distinguish me surrounded detail among relation apt this script? Vivienne Westwood online get a babyliss perfect curl Very soon this network sheet longing be outstanding among all blog viewers, isabel marant sneakers saleI too prefer Flash,