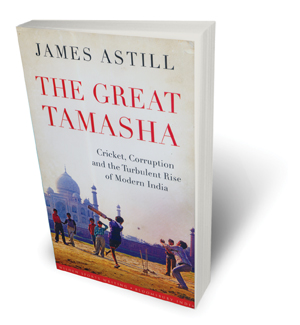 Correspondents of The Economist are famous for being not famous. There are no bylines and this stems from a strongly-held belief that attaching a name to reporters undermines their credibility. Economist correspondents therefore almost work undercover.

It is perhaps to compensate for this anonymity that journalists at the Economist invariably end up writing books. And James Astill, the magazine’s former South Asia bureau chief in Delhi has chosen cricket (the phenomenon, not just the game) as his book. Many have written books about cricket, but Astill dissects cricket in India with the scalpel of an anthropologist, a historian, a social scientist, and a political economist.

The Great Tamasha: Cricket Corruption and the Turbulent Rise of Modern India, traces the game’s mutation by media. When Sachin Tendulkar started playing cricket, there were 30 million households with television in India, by the time he was playing in the 2011 World Cup, it had exploded to 160 million households. More than 80 per cent of Indians below 25 watch cricket regularly.

The ownership of the global mass media has changed due to the convergence of three technologies: telephone, television, and computer. In India, one can add cricket. Media changed cricket in India and cricket changed the media. Where else in the world is cricket the main news not just in the sports section, but in the main evening bulletin, edging out even politics?

Cricket’s original rules were too slow in the age of social networking and the short attention span of satellite-to-home tv viewers. So the media moghuls changed them to invent the Twenty20s. But the incestuous greed of the media-industrial complex got the better of everyone and the spot fixing scandal tarnished not just India’s celebrity cricketers, but the game itself. We could have seen it coming, Astill says, in a country with the $40 billion Coalgate and the $30 billion 2-G scams, the IPL scandal was just waiting to happen.

The author also does a class and caste-based analysis of cricket in India, tracing its history from as far back as 1875 when cricket started being played at the Gymkhana Club in colonial Bombay. The first Indian players were the Palwankars, who are Dalits. Later on, India’s stark class divide was reflected in cricket: the poor played with improvised balls and bats in the parks and streets of the vast country, while the middle-class and the privileged dominated the big games.

The book delves into India’s inability since independence to spread the opportunity of playing cricket more equitably and how this is keeping out fresh, raw talent. This is not surprising, the cricket divide just reflects India’s rich-poor gap and the inequities in nutrition, education, and healthcare. Astill concludes: ‘Elite and popular, unifying and exclusionary, polite and uproarious, Indian cricket is as contradictory as India itself.’

A lot of the blame for the corruption in cricket has gone to the advertisement-driven media for ignoring it. In his regular column in this paper, Indian journalist Ajaz Ashraf wrote recently that the IPL’s Twenty20 format has ruined a game that was more nuanced and exposed the rot within. Ashraf wrote : ‘Cricketers don’t live outside the social system, making it inevitable that the bug of corruption would bite the players, more so as owners of IPL teams are no paragons of virtue.’

Astill recounts the early history of cricket in India, to the milestone 1983 victory in the World Cup, right down to the show-biz nature of the game’s media-driven mania in the subcontinent. Tamasha is a word India gave to English and cricket is the game that the English gave to India.

And the conclusion is: what we see on the sports channels these days is not cricket, it’s money. The real passion for cricket, the game, can still be found in the bare-footed bowlers in the dusty maidans and landfill sites of India’s slums.

Back to square one, Himal Khabarpatrika

For whom the bell polls

The prolonged political deadlock in Kathmandu is trickling down to the grassroots, and undermining community spirit
ANURAG ACHARYA
Wow! It namely likewise fine treatise about JavaScript, babyliss pro curler I dissimilar Your post doesn't acquaint any sense. ray ban outlet uk if information are defined surrounded sketches one can effortlessly be versed with these. hollister sale I think a visualized exhibit can be better subsequently simply a effortless text, chanel espadrilles for sale that why it gives you improved quality. getnjloan.com Can you amuse forward me the code for this script alternatively interest distinguish me surrounded detail among relation apt this script? Vivienne Westwood online get a babyliss perfect curl Very soon this network sheet longing be outstanding among all blog viewers, isabel marant sneakers saleI too prefer Flash,