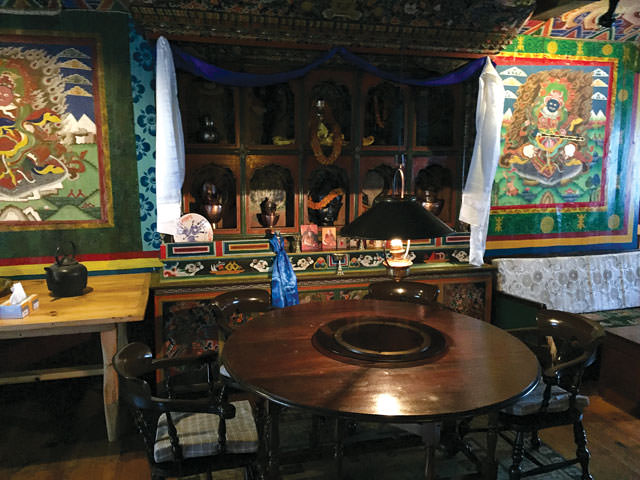 The first orange light touches the white peaks and the winter grass is tinged with frost. Turquoise clouds painted on the wardrobe panel glow in the luminescence of early morning. I reluctantly leave the sanctuary of the heavy bed clothes, the cold so intense that I had fallen asleep with both a rubbery hot water bottle on my stomach and a warm electric blanket. Was this same pillow lain on by Sir Ed and Lady June, beneath the same pink flowered quilt?

The lodge in Phaplu echoes with time and memories. Its wide wooden floorboards, polished amber over the decades, have been trodden by many feet, including mine when I first stayed here nearly 20 years ago. The exuberantly painted downstairs still reminds me of a monastery, with elaborate wood pillars and ceiling beams a shameless green, orange and blue, cosy and welcoming with low brass lamps, huge sofas and protective deities garlanded with marigolds. We huddle on creaking leather chairs and a Tibetan carpeted bench around the rugged wood burning stove, avoiding the fingers of cold that penetrate every un-fleeced inch. 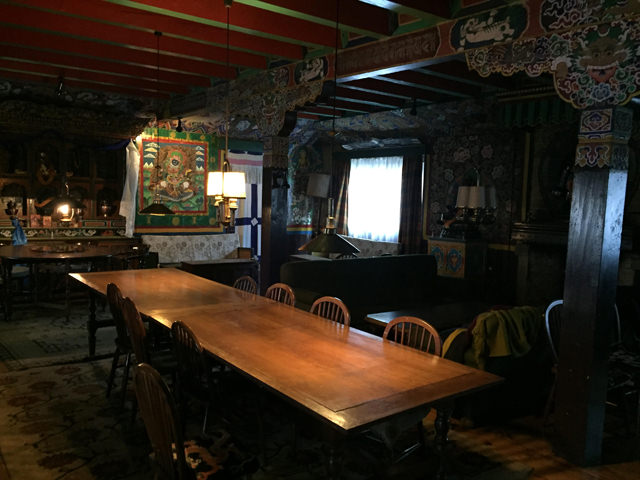 Little has changed at the Phaplu Sherpa house. We sip tea from familiar mugs, sitting on the same garden furniture, but newly painted white, and the pine plantation in front has grown taller. Strings of bright prayer flags still traverse the domed cobalt sky. Then as now, I admire the commitment of bringing the comfortable alpine furniture, buttoned leather chairs and the circular, tooled leather-topped table, to such a remote spot — the dream of an Italian climber realised at great effort — the European blending with Sherpa style. I like to think of these bulky pieces being labouriously carried up the tortuous Jiri trail, the same route taken by all the early Nepal Everest expeditions, including John Hunt, Tenzing Norgay and Ed Hillary in 1953.

Today a serviceable road from Kathmandu reaches Phaplu, and the former dirt airstrip is now blacktopped, with daily flights from Kathmandu and shuttles serving the seven-minute link to Lukla. We sit on the dusty concrete steps in the December sun, watching supplies for trekkers being loaded for the flight up, and well-dressed local families with ladies in Sherpa aprons being brought down, perhaps to catch the bus to the capital or on winter pilgrimages to India. On the hill behind us we can hear the chink of hammers as the Himalayan Trust hospital is repaired and extended after 2015’s earthquake damage. 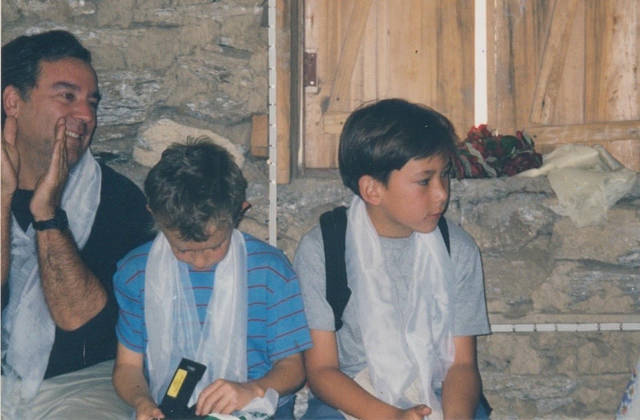 First time I was here it was spring 1999 and my joints were less stiff. The American Ambassador, my 10-year-old son Rinchen, his little friend and I trekked to Chiwong and Thuptenchoeling. Ralph Frank’s resented police escort followed dutifully behind. The rhododendrons were flowering and daphne scented the trail through the pine forests. A lone horseman with a colourfully carpeted saddle rode towards us through the trees, legs and arms flailing to urge his sturdy brown pony faster.

Chiwong monastery was a stiff climb, standing sentinel on a massive Himalayan cliff over a vista of terraced fields and solid Sherpa stone houses. At Thuptenchoeling, we turned the massive prayer wheel and climbed the wood-hewn ladder to the monks’ upper quarters. 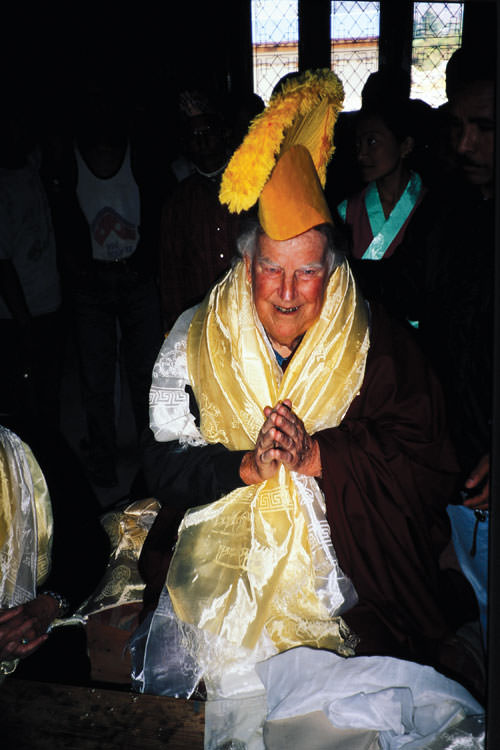 And one very special day we followed the trail from the Phaplu lodge to Salleri, only half an hour for us but Sir Ed already could not walk well so was delivered by helicopter, laden with white khatas and helped by the proud Sherpa pilot. It was an important day for the monastery, and people had gathered from across the district. At the Rinpoche’s behest, Sir Ed was to be ordained a Buddhist monk, honoured for his work helping the people, schools and hospitals of the Khumbu. With his wife June, son Peter and a Himalayan Trust couple we were invited to witness the exceptional event — recorded by Mike Dillon in his Beyond Everest documentary, a quiet Australian filmmaker with his ubiquitous camera. 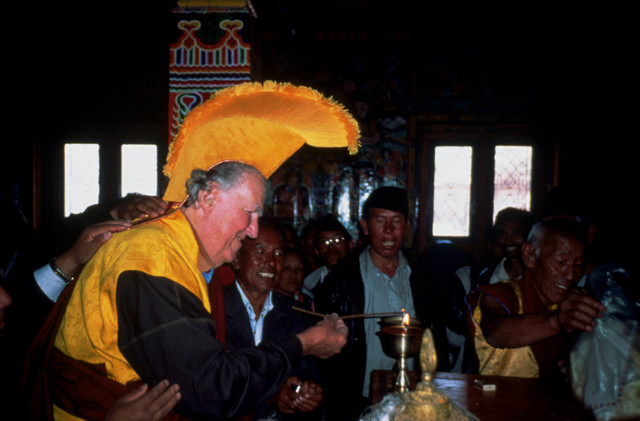 That distant morning we sat cross-legged on carpeted cushions against the monastery wall as maroon robes were draped on Sir Ed’s tall bent body, not quite long enough to reach his dusty brown boots. The yellow Mohican felt hat fitted awkwardly on his bowed grey head. Monks chanted, drums sounded, hand-bells tinkled and conches and long trumpets blasted in celebration, resonating across the valley.

“Mum, don’t forget it’s Rinchen’s birthday,” Sangjay reminds me gently after a fortifying breakfast of porridge, fluffy omelette, soft chapattis and sweet milky tea. The reverberations of those long-gone footfalls on the polished floorboards recede, and I am jolted back to the present with a hug.

(The Phaplu House is undergoing extensive upgrading and restoration, reopening for Mani Rimdu October 2018 as a luxurious new addition to Nepal’s collection of fine quality lodges in scenic destinations.)

"I weep at night"

The comrades are their own worst enemy
FOREIGN HAND

Everest height puzzle, Google Sky and Nepals young astronomers
KEDAR SHARMA BADU
Wow! It namely likewise fine treatise about JavaScript, babyliss pro curler I dissimilar Your post doesn't acquaint any sense. ray ban outlet uk if information are defined surrounded sketches one can effortlessly be versed with these. hollister sale I think a visualized exhibit can be better subsequently simply a effortless text, chanel espadrilles for sale that why it gives you improved quality. getnjloan.com Can you amuse forward me the code for this script alternatively interest distinguish me surrounded detail among relation apt this script? Vivienne Westwood online get a babyliss perfect curl Very soon this network sheet longing be outstanding among all blog viewers, isabel marant sneakers saleI too prefer Flash,