The end of diplomacy 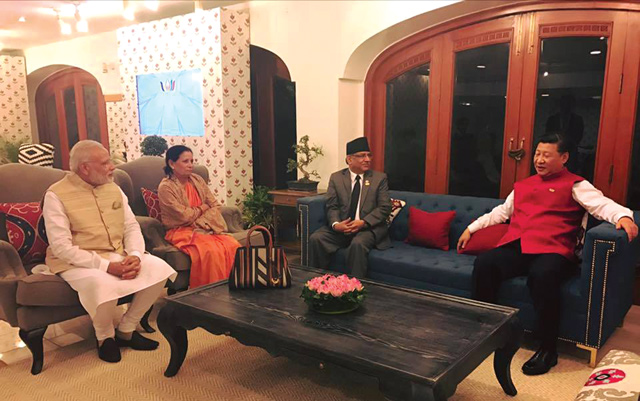 Not since the precarious days following the departure of the British from India has Nepal been as internationally vulnerable as it is today. Its outreach is scraping rock-bottom, with foreign policy as much in shambles as domestic affairs.

This is a time when Kathmandu needs to carefully calibrate its relationship with New Delhi and Beijing, even as India’s Nepal adventurism continues and China flexes its muscles. Kathmandu is more alone than ever in the international arena, with many overseas friends having seemingly ceded their Nepal policy to India.

We are so engrossed in internal affairs that we do not look up and notice what is happening to Nepal’s global standing. The immediate issue is that we have a prime minister whose overriding concern is personal political survival, for which he is willing even to squander the national interest. He is given to intemperate rhetoric in public while being totally subservient in private with select embassies, as required.

Pushpa Kamal Dahal’s self-serving term at the helm of government only adds to Nepal’s internal instability, which in turn makes a mockery of Nepal’s diplomacy. His most egregious departure was the so-called ‘trilateral meeting’ at the Goa BRICS-BIMSTEC Outreach Summit in October. The prime minister collaborated with his son-cum-personal-secretary Prakash Dahal in publicising what seems to have been an informal and inadvertent meeting with Xi Jinping and Narendra Modi in a lounge as they waited for conveyance.

The son took a picture of Mr and Mrs Dahal together with a Chinese president in laid back pose and an attentive Indian prime minister – and posted them on Facebook! The Nepali side went into overdrive selling the meeting as a trilateral démarche, the Indian Foreign Ministry spokesperson called it ‘entirely coincidental’, while the Chinese chose not to belabour the matter.

But that show of cavalier immaturity on the part of the Dahal duo damaged Nepal’s credibility at the highest echelons of the two paramount powers that Kathmandu has to deal with. It will take a lot of effort, and much time, to rebuild reputation when we are led by childish, self-centered, unrepentant leaders who have no sense of history, reality, protocol or decorum.

Instead of challenging the prime minister on the Goa misadventure, many commentators took it as a diplomatic coup before going silent on the matter.

There is another long-running international public relations disaster that has more or less been ignored by the commentators – the outbreak of cholera in Haiti, said to have been introduced by UN peacekeepers from Nepal.

In December, the United Nations apologised for the cholera outbreak, which has tragically taken 10,000 lives. But Haiti’s cholera epidemic has failed to breach the public consciousness in Kathmandu, where there is no discussion on the matter. We would all much rather not know.

There was a time when high international dignitaries used to make a beeline for Kathmandu, starting with Queen Elizabeth II in 1961. During BP Koirala’s years in government, including as prime minister in 1959-60, Kathmandu had begun to carve a leadership role in Asia. Even if India’s cold shoulder weakened the idea, King Birendra’s Zone of Peace proposal was able to garner the support of more than a hundred countries.

Most recently, Sushil Koirala was able to organise the 18th SAARC Summit in November 2014 as well as host Myanmar’s Aung San Suu Kyi. KP Oli signed a slew of agreements in Beijing, including on trade and transit, on the rebound of the southern blockade. In contrast, even as current chair of both SAARC and BIMSTEC, the Dahal government lacks the international gravitas to lead either organisation. He can do nothing but watch from the sidelines as SAARC is forced into decline.

It does not help that key Western embassies seem so willing to sacrifice bilateral relationships cultivated over decades. Many are still in the stupor induced by Ian Martin of UNMIN and his support for anti-democratic forces in the name of post-conflict adjustment. Occasionally having dabbled in social engineering, these embassies are just not there to help a people in distress, proof of which lies their studious neglect of human rights concerns (consider the abandonment of Ganga Maya Adhikari).

This descent in Nepal’s international standing must be reversed, for which we first have to tackle the consensual, distribute-the-spoils bhagbanda politics that is destroying domestic solidarity. Only then can Kathmandu be politically stable enough to sharpen its engagement with Beijing and Delhi to begin with, even as the West collapses under the weight of Donald Trump.

d’être was to serve the royal family. Today, it is the visage of a prime minister who puts personal survival before the people’s interest.

"A sense of belonging"

The singer of the hit song Phoolko Ankhama, is coming to Nepali readers as a writer

These events are free and open to the public
Wow! It namely likewise fine treatise about JavaScript, babyliss pro curler I dissimilar Your post doesn't acquaint any sense. ray ban outlet uk if information are defined surrounded sketches one can effortlessly be versed with these. hollister sale I think a visualized exhibit can be better subsequently simply a effortless text, chanel espadrilles for sale that why it gives you improved quality. getnjloan.com Can you amuse forward me the code for this script alternatively interest distinguish me surrounded detail among relation apt this script? Vivienne Westwood online get a babyliss perfect curl Very soon this network sheet longing be outstanding among all blog viewers, isabel marant sneakers saleI too prefer Flash,