Enough accusations of corruption in the judiciary, time to start investigating them 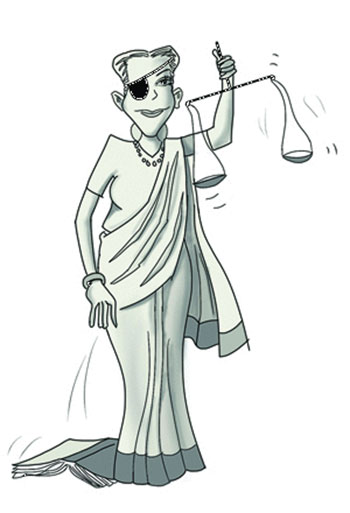 The Nepal Bar Association (NBA), the umbrella organisation of lawyers, recently declared at its 13th National Conference in Chitwan that there was rampant corruption in the judiciary. It said the justices themselves were on the take, and asked the Chief Justice to take action against them.

Soon after, NBA vice-president Tika Ram Bhattarai and the ex-secretary Raman Kumar Shrestha said in an interview to an online news site that they could provide evidence of such corruption. They also added that it wasn’t just judges who were rotten: lawyers, journalists and power brokers were all involved in bribery.

The public has come to take any allegation of corruption in high places as commonplace. They aren’t surprised that the Supreme Court has also been tarred by the same brush, but this time it was the NBA making the allegation -- a body that is supposed to keep the judiciary accountable.

The personal secretariat of Chief Justice Ram Kumar Prasad Shah then fired off a letter to the NBA asking it to provide evidence to back up its accusation against the apex court. This was unprecedented, the Chief Justice or his office had never before written such a letter to anyone. In fact it was highly irregular for the Supreme Court to do so.

Apparently the justices felt alluded to pressure the Chief Justice Shah at a full court meeting to send the letter. One of the Justices told me, on condition of anonymity, that his colleagues argued that if the Chief Justice did not ask for the evidence then it would seem like they were guilty.

As expected, the NBA was not able to provide evidence to the Chief Justice of corruption at the Supreme Court – after all the corrupt don’t leave a paper trail. In their written statement, however, the Bar said it did have evidence but that it would provide that to the Judicial Council or Parliament Hearing Committee.

The NBA's answer also came across as careless and irresponsible. If it have evidence as it had claimed earlier why did it hesitate to share it with the Chief Justice, who after all, is also the chairman of Judicial Council? The Chief Justice would have been under pressure to take action.

After the NBA’s response, we haven’t heard a peep from the Bar. The Chief Justice should have taken it up at the Judicial Council and asked for further evidence by now. The Parliament Hearing Committee which was active during the appointment of Justices has also not taken the NBA letter with the seriousness it deserved.

Enough accusations, the time has now come to investigate them. After all, we are talking about the Supreme Court – and that final provider of justice should not just be making allegations, it should be weeding out the crooks. In fact it is the media that is providing the evidence that the NBA isn’t through with stories like the one by Bhrikuti Rai of the Centre for Investigative Journalism and printed in this paper (#753) about the Chief Justice letting off a fake doctor who embezzled money meant for medical care in Humla on bail.

The Bar and the Bench are in a perpetual state of war, and that is nothing new. In 2008, the president of the NBA, Biswa Kant Mainali made the statement that the post of Justices is a license to corruption. The full court had decided to seize his advocate license for six months. But after lawyers took to the streets, the decision was revoked.

The NBA and the Supreme Court are both there to dispense justice. There are always two parties involved in corruption: the giver and the taker. So we can’t ignore those who are bribing the judges either.

It is already too late to expose corruption in the judiciary, and restore people’s trust in an impartial justice system. Both the Bar and the Bench from their side have to work together to take action against the corrupt in their midst. Otherwise, it will be interpreted that they themselves are afraid that the issue will negatively affect them.

The mote in thy brother’s eyes, Anurag Acharya

2100 looks good, too bad you'll be dead by then
RABI THAPA
Wow! It namely likewise fine treatise about JavaScript, babyliss pro curler I dissimilar Your post doesn't acquaint any sense. ray ban outlet uk if information are defined surrounded sketches one can effortlessly be versed with these. hollister sale I think a visualized exhibit can be better subsequently simply a effortless text, chanel espadrilles for sale that why it gives you improved quality. getnjloan.com Can you amuse forward me the code for this script alternatively interest distinguish me surrounded detail among relation apt this script? Vivienne Westwood online get a babyliss perfect curl Very soon this network sheet longing be outstanding among all blog viewers, isabel marant sneakers saleI too prefer Flash,