The new Chief Justice is from a minority within a marginalised community, this is hugely symbolic 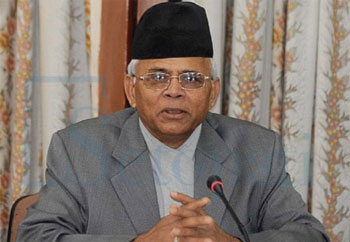 SETOPATI
Ram Kumar Prasad Sah, who was sworn in as the Chief Justice last week by the President, takes office at a time when Nepal’s judiciary has fallen into some serious disrepute.

He will be in office for nine months, and after his appointment assured the people through the media that he would not compromise on the independent judiciary at any cost.

The reason this statement sounded a bit defensive was because of the public perception that the previous interim electoral government led by Chief Justice Khil Raj Regmi had compromised on the independence of the judiciary by removing the separation of powers. The Supreme Court has also been tainted by the appointment of six controversial justices earlier this year.

Khil Raj Regmi’s appointment was criticised by legal and media fraternity, and after Regmi stepped down, the gavel went to Damodar Prasad Sharma who immediately came under fire for the appointment of the controversial judges. Though Regmi’s government was successful in managing peaceful, free elections with a huge turnout last year, his decision to head the government undermined the independence of the justice system. Damodar Sharma’s lack of accountability tainted it further.

Sah knows that he has to set a lot of things right. He did speak up against the appointment of the justices by Sharma, and wrote a note of dissent against two of the nominees. But, for the moment, he has no option but to retain them in the court.

Sah is from Mahottari, and is the fourth Chief Justice from the Madhesi community. Not only is he from the plains, but he is a Sudhi, considered a ‘lower’ caste. His Madhesi predecessors tended to be from the higher castes. This itself is of great symbolic value to show that Nepal’s branches of government are becoming inclusive.

However, tokenism is not enough. Sah will have to prove that he is capable of reforming and cleaning up the judiciary. In his previous verdicts, Sah for his part, has shown decisiveness, competence, and demonstrated a clear vision. He started his career as a section officer in the Supreme Court 40 years ago, and during his long career has never been tainted by controversy except that he once asked for Rs 7 million for his medical treatment in Bangkok.

He has his work cut out: the Supreme Court has a massive backlog of 19,000 cases and not enough judges to clear it up. Sah’s predecessor, Damodar Prasad Sharma, had vowed to reduce the backlog of pending cases from 17,000, but instead the number of cases increased while he was Chief Justice. Previously, Sah was one of the members of Judicial Council, and hopefully this will address the concerns of lawyers about Chief Justice appointments.

Sah has said that he will prioritise cases of rape and human trafficking, and clear them within three months. He has also promised a paperless court, which sounds a bit ambitious. Even so, he took a good first step of publishing the list of cases at 10am on the first day of his appointment. He has ordered Justices to be at the bench by 11am promptly, and believes in a good start being a job half done.

A Transparency International report has shown repeatedly that there is massive corruption inside Nepal’s court system. Sah will have to tackle growing corruption within judiciary and lessen the influence of power brokers in verdicts. Since graft is so ingrained, and almost regarded as standard operating procedure, Sah will need all the commitment he can muster to tackle corruption in the courts. Only then can he reassure the public that the Supreme Court is an independent arbiter of justice.

Letter to the CJ

The state-run postal system faces stiff competition from efficient private courier services and the Internet. Nepals Department of Postal Services is taking a hard look at itself-but is anyone else?
HEMLATA RAI

The throne was thrust upon him, and the only silver lining may be that exemplary leadership is often forged during testing times.
SAUBHAGYA SHAH

There is a growing demand for autonomy for the postal service. The general consensus among postal employees is that bureaucratic red tape is hampering efficiency and driving away business.
DANIEL LAK

Trekking in Mustang, you pay Rs25 for a "sun bath". Fancy name for something many Valley residents are familiar with: solar-heated water.
HEMLATA RAI
Wow! It namely likewise fine treatise about JavaScript, babyliss pro curler I dissimilar Your post doesn't acquaint any sense. ray ban outlet uk if information are defined surrounded sketches one can effortlessly be versed with these. hollister sale I think a visualized exhibit can be better subsequently simply a effortless text, chanel espadrilles for sale that why it gives you improved quality. getnjloan.com Can you amuse forward me the code for this script alternatively interest distinguish me surrounded detail among relation apt this script? Vivienne Westwood online get a babyliss perfect curl Very soon this network sheet longing be outstanding among all blog viewers, isabel marant sneakers saleI too prefer Flash,