When the executive and legislature are not functioning at optimum, it is up to the judiciary to act 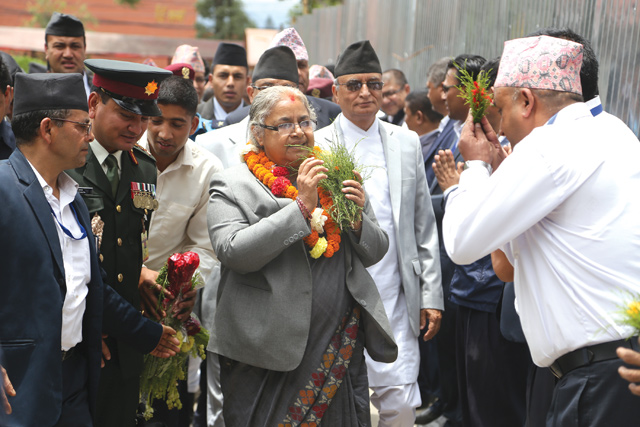 During the parliamentary hearing to ratify her appointment, Chief Justice Sushila Karki presented herself so boldly that Members of Parliament looked visibly dazed listening to her. She came across as a no-nonsense, straight talker who believed and practiced the law with integrity.

Ever since, Karki has been equally audacious in carrying out her duties at the Supreme Court. There were murmurings about her gender when she was first appointed and doubts floated among the male-dominated legal fraternity that she might not be able to withstand the various pressures and inducements that came with the position. There were worries that the Chief Justice would be a weakling, and that she would not be able to take leadership of the judicial administration.

Karki had a shaky start to her tenure with the political distraction of a regime change three months ago and with the Parliament taking forever to conduct the hearing to ratify her appointment by the Constitutional Council. She then had just eight of the required 19 justices, and a huge backlog of cases to handle. Since the Chief Justice is responsible for any wrongdoings by the justices in verdicts, it was tricky.

The Parliament finally also endorsed the remaining 11 justices, and the Supreme Court is now fully functional. Karki has shown impartiality and has refused to bow to political pressure during her tenure as Chief Justice.

Despite her Nepali Congress antecedents from Biratnagar, she revived corruption cases against senior NC leaders Khum Bahadur Khadka and Govinda Raj Joshi. It was her bench that convicted sitting minister Jaya Prakash Gupta on a corruption case by overturning a verdict of the Special Court.

Karki has always preferred to maintain a low profile, displaying none of the flamboyance of her predecessors even though her verdicts tend to thrust her into the limelight. As Chief Justice she has given strong decisions censuring the Commission for the Investigation of the Abuse of Authority (CIAA) for overstepping its jurisdiction. At a time when the bureaucracy, politicians and even the media appear to have been silenced, these decisions have reinforced her reputation as an impartial jugde.

Sushila Karki is also busy allocating cases and forming committees. She has curtailed the activities of power brokers and middlemen who in the past played a role in distributing cases by offering inducements to justices. Lawyers say it was standard operating procedure that middlemen negotiated pliant justices for cases in return for favours during the tenures of Damodar Prasad Sharma and Ram Kumar Prasad Sah. The power brokers had their wings clipped when Chief Justice Kalyan Shrestha was in office. Karki has publicly vowed to stop this practice.

Karki has challenges ahead in the management of judges and human resources of the Supreme Court. On Sunday, the Parliament passed a bill related to the formation of High Courts in seven provinces and she has to form these provincial courts. As head of the Judicial Council, it will be Karki’s responsibility to place Judges of the Appellate Court to the High Courts. Equally challenging is the management of pending cases from Appellate to the High Courts. Karki’s leadership will be severely tested by her decisions.

The concept of High Courts in a federal structure is itself a difficult proposition because of the number of provinces, their boundaries and capitals. Each province should have a High Court, and then there is the tough job of converting 16 Appellate Courts to seven High Courts. The remaining nine months of Karki’s tenure will show how well Nepal’s first female Chief Justice will meet these challenges. When the other pillars of democracy, the executive and legislature, are not functioning as they should, it is essential for the judiciary to step up to the mark. Under Karki, the judiciary seems to be serving as a credible check and balance to authority.

“I will not spare the corrupt”, From the Nepali Press

What will we do when we come to the fork in the road
DANIEL LAK
Wow! It namely likewise fine treatise about JavaScript, babyliss pro curler I dissimilar Your post doesn't acquaint any sense. ray ban outlet uk if information are defined surrounded sketches one can effortlessly be versed with these. hollister sale I think a visualized exhibit can be better subsequently simply a effortless text, chanel espadrilles for sale that why it gives you improved quality. getnjloan.com Can you amuse forward me the code for this script alternatively interest distinguish me surrounded detail among relation apt this script? Vivienne Westwood online get a babyliss perfect curl Very soon this network sheet longing be outstanding among all blog viewers, isabel marant sneakers saleI too prefer Flash,