The loose alliance of the Madhesi Front is fraying 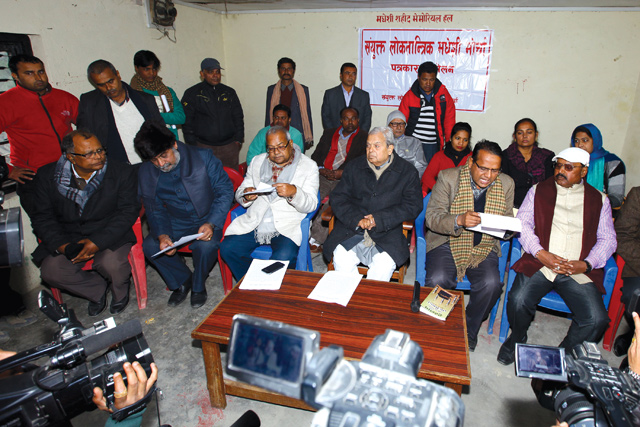 It was bound to happen, and it has. As the border blockade shows signs of easing and Indian support for the agitation wanes, fissures have opened up in the United Democratic Madhesi Front (UDMF).

What is surprising is not that there are disagreements between personalities heading the component parties in the Front, but that it took so long for the splits to emerge. There is a feeling among the Madhesi people that they have once more been cheated at the hands of these self-proclaimed messiahs.

After Sadbhavana Party leader Rajendra Mahato was injured in protests in Biratnagar last week he was flown to New Delhi’s most expensive private hospital for treatment. Mahato has been accused of exaggerating his injuries, using it for political grandstanding.

Mahato has often claimed that he represents the interests of ordinary Madhesis, and he has been constantly trying project himself as the most radical of the lot. Yet, even as he tries to identify with the cause of the Tarai proletariat, he has the lifestyle of Nepal’s political neo-elite.

From his hospital bed at Medanta, Mahato announced fresh protests in statements written out in Hindi in stationery without the party letterhead. Other leaders in the Madhesi Front, especially Upendra Yadav, have not tried to hide their misgivings about Mahato’s mischief, but they have to compete with his radicalism. “He is just fooling the people, he is faking his illness and going through this drama to gain cheap popularity,” Yadav told a party program in Janakpur over the weekend. In tea shops in Birganj and among people huddled around cowdung fires in Janakpur, the talk is that the loose alliance of the Madhesi Front is fraying.

The most enigmatic has been Bijay Gachhadar of the Madhesi People’s Right Forum-Democratic (MPRF-D) which was part of the Big Four alliance that mooted the constitution draft in August. But he fell out after the agitation in the Tarai spread and intensified. Gachhadar has been so quiet that many don’t even realise that he is Deputy Prime Minister and Minister of Physical Infrastructure and Transport in the Oli government.

The lust for power is no less among other leaders of the Madhesi Front. Upendra Yadav, Mahanta Thakur, Anil Kumar Jha have all held senior government posts in the past, and the perception among the silent majority in the plains is that they have amassed wealth and built villas in Kathmandu while the people of the Madhes live in grinding poverty.

As the fires in the Madhes ebb, anger that used to be directed at the rulers in Kathmandu is turning to the Madhes’ own self-appointed saviours. The nearly five month long agitation in which the Madhesi people suffered the most is now fizzling, and has left the people of the Tarai pondering what it is that they actually achieved.

Mahato has now said in so many words that he is no more associated with the Madhesi Front, which he regards as having sold out. The Madhesi parties have suffered frequent splits in the past, and almost always it is not over ideology but for plum posts in the central government.

They are the ones most guilty of appointing wives, sisters and in-laws to proportional representation seats in the CA. Rajendra Mahato offered a PR seat to his better half. Anil Jha and Raj Kishore Yadav also made their wives CA members. Mahanta Thakur made his daughter’s mother-in-law a CA member. Nepali politicians are in general notoriously irresponsible to their electorates, but the plains-based parties take the cake when it comes to lack of accountability.

The Tarai Madhes Democratic Party (TMDP) chair Mahanta Thakur has claimed that Madhes region fulfills all the parameters to be an independent state, and that a separate Tarai would be utopia. Even if it is an attempt to talk tough, these are irresponsible statements. Besides with the kind of nepotism, corruption and poor governance they have displayed, an independent Madhes is likely to be even poorer.

As a Madhesi, I am sympathetic to most of these demands, but mainly I want the Nepali state to treat me fairly and with respect. We want equality, economic development, health, education and jobs. We need to attain these goals to also ensure that 60 innocent lives were not lost in vain.

The Madhes unrest and accompanying Indian blockade have impoverished the poor while the middlemen are making a fortune. The time has now come for Madhesi leaders to justify the four month-long agitation to the people who were made to suffer and die. Was it for genuine autonomy and respect, or was it so they could get into government?

Save our rivers from ourselves

Protecting the Karnali, Madi and Tamor as free-flowing rivers will save them for future generations
MEGH ALE

10 July
Wow! It namely likewise fine treatise about JavaScript, babyliss pro curler I dissimilar Your post doesn't acquaint any sense. ray ban outlet uk if information are defined surrounded sketches one can effortlessly be versed with these. hollister sale I think a visualized exhibit can be better subsequently simply a effortless text, chanel espadrilles for sale that why it gives you improved quality. getnjloan.com Can you amuse forward me the code for this script alternatively interest distinguish me surrounded detail among relation apt this script? Vivienne Westwood online get a babyliss perfect curl Very soon this network sheet longing be outstanding among all blog viewers, isabel marant sneakers saleI too prefer Flash,