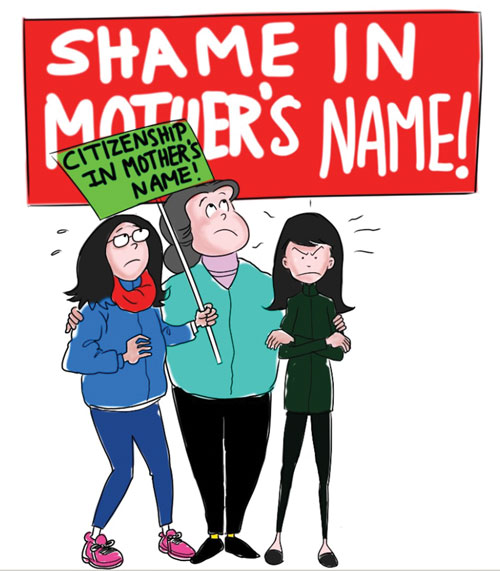 In 2013, on International Women’s Day, while struggling to acquire citizenship for my two daughters, I went to meet Prime Minister Baburam Bhattarai. He told me to wait for the constitution to be promulgated with new provisions on citizenship for the offspring of foreigners or single mothers.

It has been five years. There has been an earthquake, a blockade, three prime ministers and a new constitution. The past five years of activism for citizenship means that I have had to give up my job, live in limbo, organise rallies, interviews, run around the Supreme Court, lawyers offices, government offices, and write columns like these.

My younger daughter was nearly stopped from giving her SLC examination because she did not have her birth certificate. I filed my case in the Supreme Court and won at least for the birth registration, which was finally issued but in the name of ‘Mr Thegan Nabhaeko’ (Mr Unknown). I had married a childhood friend who was also struggling for citizenship through his mother, as his father had died when he was young. Five members of my current family are without citizenship, my two daughters, husband and two of his brothers.

It is excruciating to see my daughters growing up without being able to spread their wings. If I had left my daughters on the streets when they were young they may have been citizens by descent by now. Their only hope to be a Nepali now is to marry someone so they can get citizenship through their husbands.

Right to have rights, Sangita Thebe-Limbu

In a stateless state, From the Nepali Press

Who will be a Nepali, From the Nepali Press

Some are paralysed by the cell phone ban, others dont miss it at all
NARESH NEWAR

MALLIKA ARYAL
Wow! It namely likewise fine treatise about JavaScript, babyliss pro curler I dissimilar Your post doesn't acquaint any sense. ray ban outlet uk if information are defined surrounded sketches one can effortlessly be versed with these. hollister sale I think a visualized exhibit can be better subsequently simply a effortless text, chanel espadrilles for sale that why it gives you improved quality. getnjloan.com Can you amuse forward me the code for this script alternatively interest distinguish me surrounded detail among relation apt this script? Vivienne Westwood online get a babyliss perfect curl Very soon this network sheet longing be outstanding among all blog viewers, isabel marant sneakers saleI too prefer Flash,