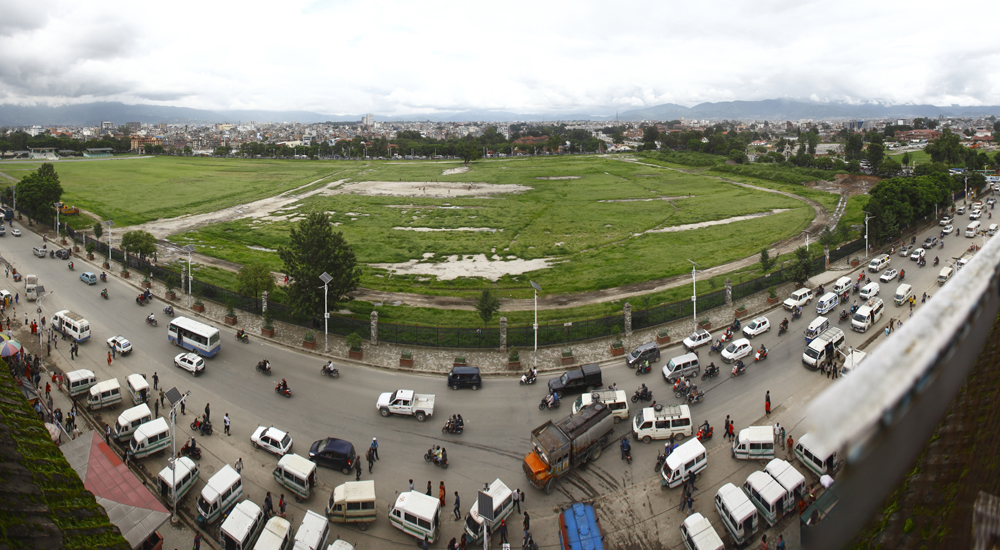 After last year’s earthquake, Tundikhel was the only open area Kathmandu's residents could flock to. For months, the military parade ground was turned into a huge open-air shelter, just like after the 1934 earthquake.

The makeshift tents are now gone, and Tundikhel is once more the city’s green lung. But it is shrinking, as most of it has been fenced off by the Nepal Army. The Open Air Theatre is being turned into an underground parking lot. Over the years, Kathmandu’s dwindling open spaces are being increasingly encroached upon.

“Post-earthquake was the right time to plan and make people understand the value of public spaces, but unfortunately it is not going in that direction,” lamented Padma Sundar Joshi of UN-Habitat.

The International Organisation for Migration has identified 83 open spaces within the valley as refuges in case of future earthquakes. But Kathmandu needs more than just open areas, it needs public parks. Says Joshi: “Public parks are important from the social interaction aspect. A city without open spaces becomes more individualistic because there is no community interaction.”

There are only a handful of public parks at present. Some communities have taken matters into their own hands and started building their own, like Nandi Keshwor Garden in Naxal and Bankali Garden in Pashupati.

Shriju Pradhan, Chief of Heritage Conservation of the Kathmandu Metropolitan City (KMC) says: “If we had local elections, representatives would be forced to be accountable and meet the public’s demand for open spaces.” KMC recently announced a plan to construct at least one park in each ward, and has set aside money for this. Environment Division Chief Rabin Man Shrestha says that the city can be made greener. “Ideally more than 10% of the city should be green, which is not the case right now.” 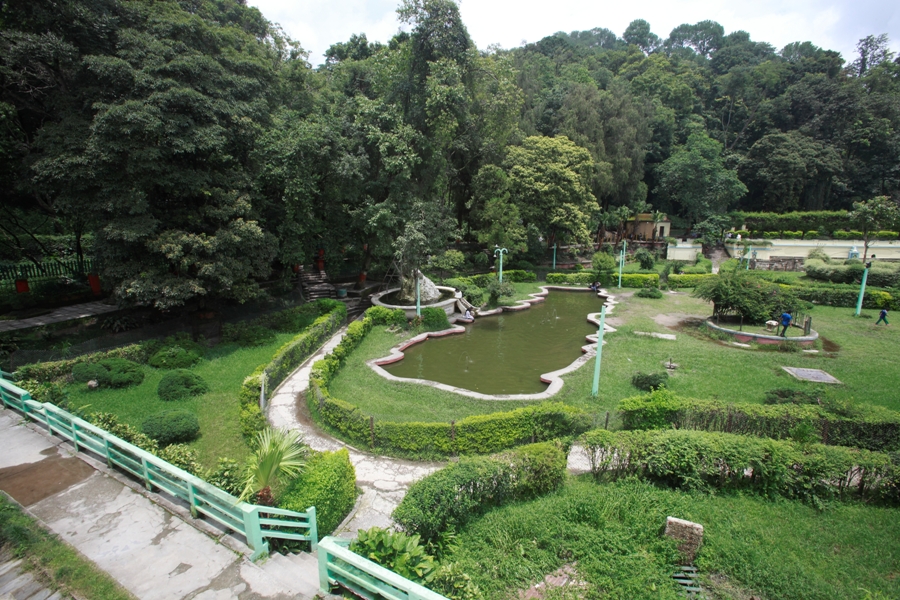 The park is managed by KMC, and sees up to 500 visitors in a day. “We understood the need for open space during the earthquake, as many people had shelter because of this park,” said park official Damodar Lama. Visitors are charged on entry. 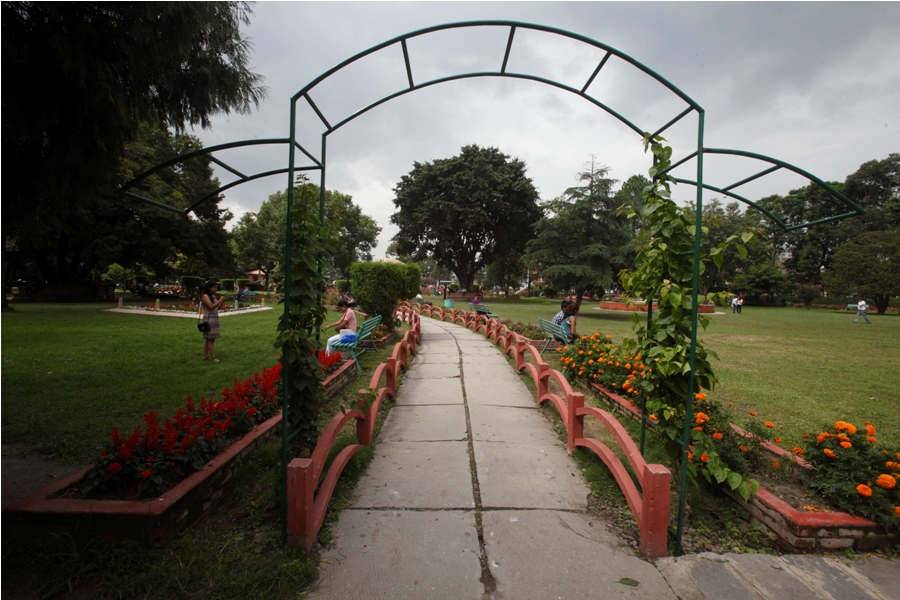 A spick and span park under the KMC, in the heart of the city. With lush greenery, colourful flowers, a duck pond and ample space for strolling, it is one of the few well-kept ones in the city. Visitors are charged on entry. 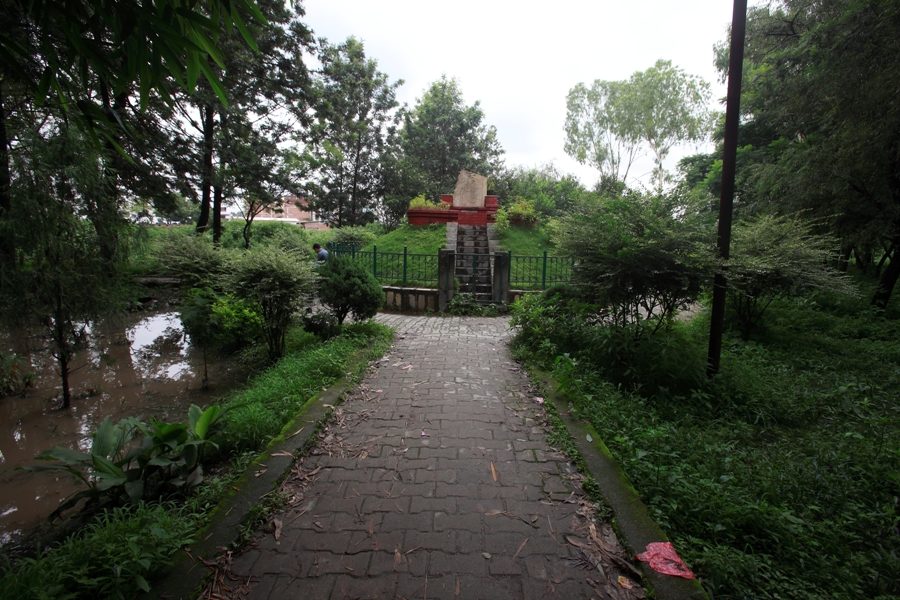 This park, aimed at adding to the green space along the Bagmati Promenade, has become neglected and overgrown, but at least it has not been built up. A garbage dump site has overtaken part of the park. 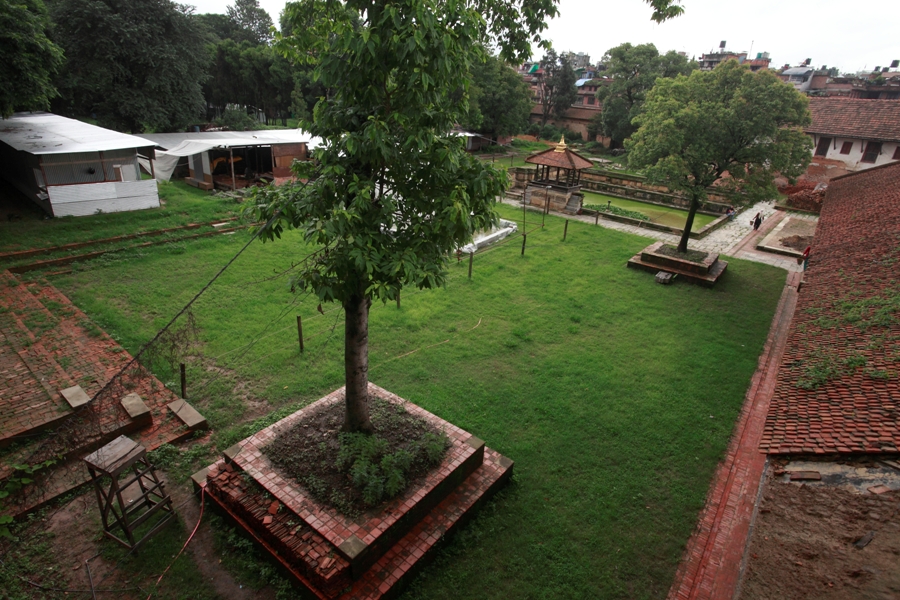 Formerly a Malla-era garden, this is one of the few remaining green areas in Patan. “We want to give easy access to the locals. There is hardly any green space left in Kathmandu, so why should we close it?” asks Kathmandu Valley Preservation Trust’s Rohit Ranjitkar. 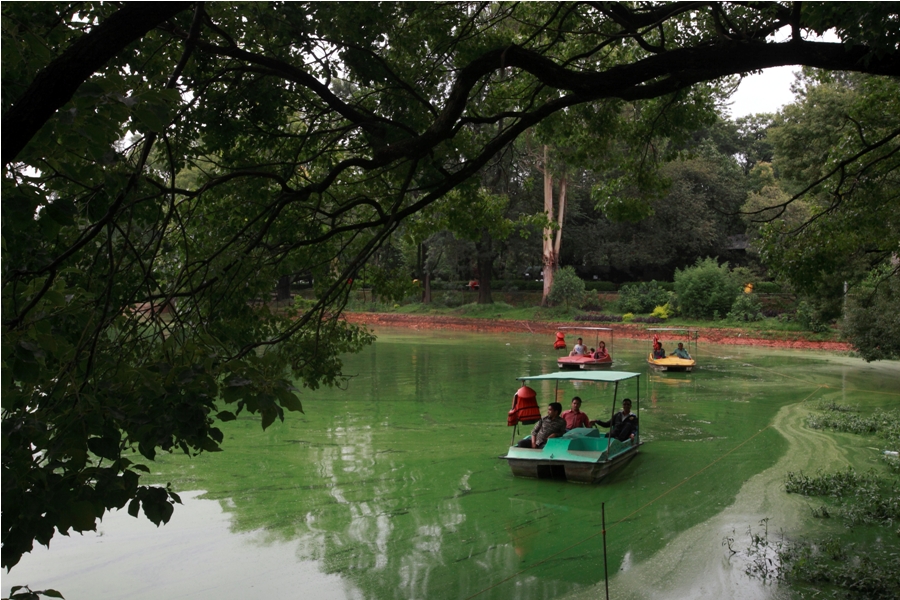 The Jawalakhel zoo makes for a prime location as an open space and public park. Situated at the centre of congested Patan, the area has a large pond and abundant greenery. Visitors are charged on entry. There are plans to shift the zoo to Surya Binayak. 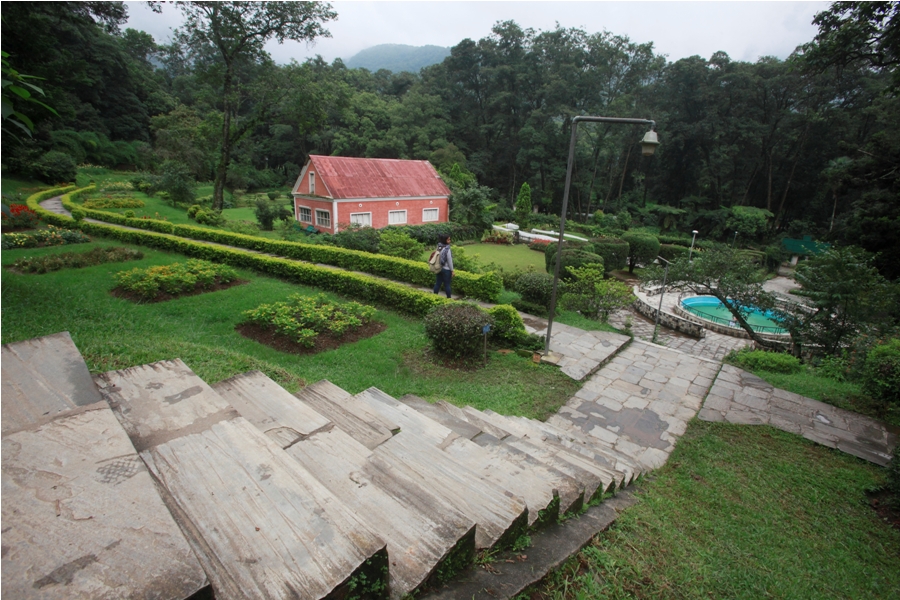 Located at the base of Phulchoki, the highest point in Kathmandu Valley, the garden provides a lush and welcome respite for residents. It also aims to raise awareness regarding plant resources. Visitors are charged on entry. 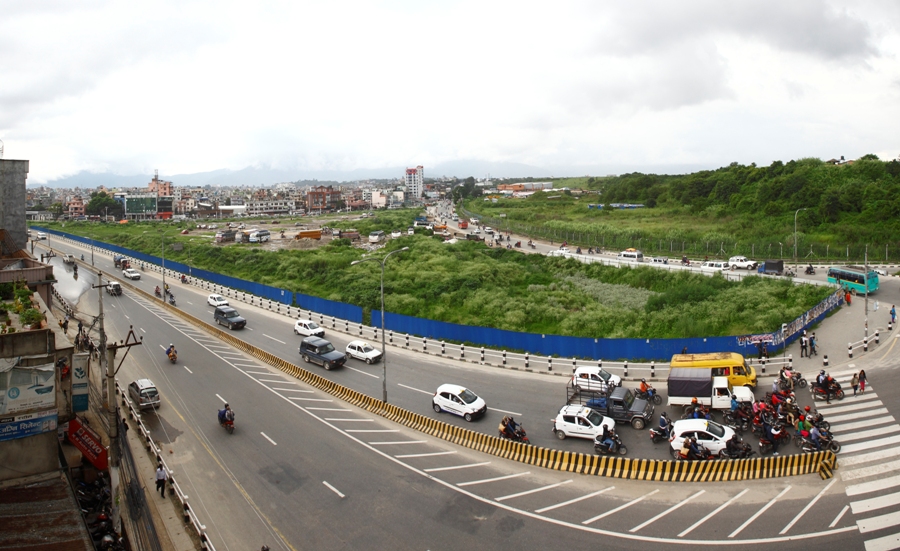 A gateway for tourists entering Kathmandu from the airport, this triangular piece of land has received overnight makeovers during SAARC Summits. Plans to turn it into a park were announced in 1974 and several designs have been made, one of which includes underground parking, a meditation hall, souvenir shops, a tall Buddha statue in the middle, and handicraft stalls targeting tourists. But nothing has happened. 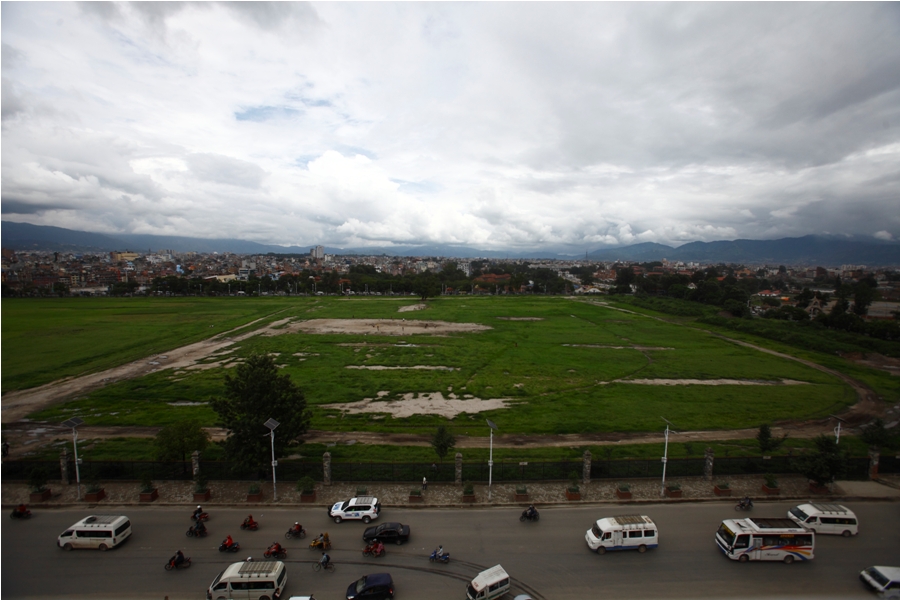 Tundikhel, which once used to stretch from Rani Pokhari to Dasarath Stadium, has been reduced to a fraction of its original size. The Nepal Army controls the entire tract, and there is little left for public use. Part of the Open Air Theatre is currently a temporary bus park, and the Army is adding buildings in the open area right next to the Army Officer’s Club. “It is a public space. The Army does not have the right to construct anything, or stop movement of the people, in the area,” said Padma Sundar Joshi of UN-Habitat. 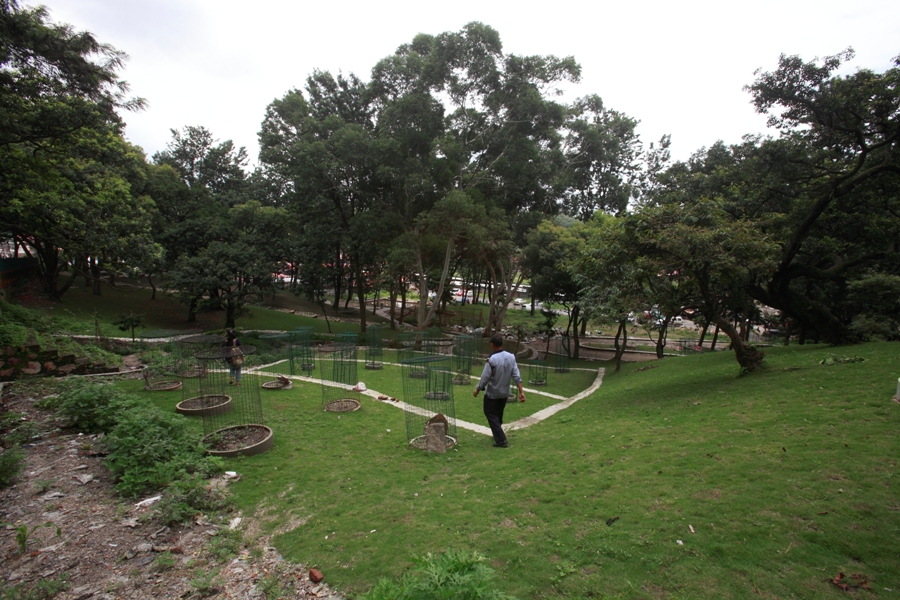 The Radha Madhav Samiti plans to build a park on the land owned by Pashupati Area Development Trust. “The world over, there are parks that are doing so well. So we thought, why can’t we make something similar on land that was not being used for anything?”, says engineer Khagendra Chaulagain. 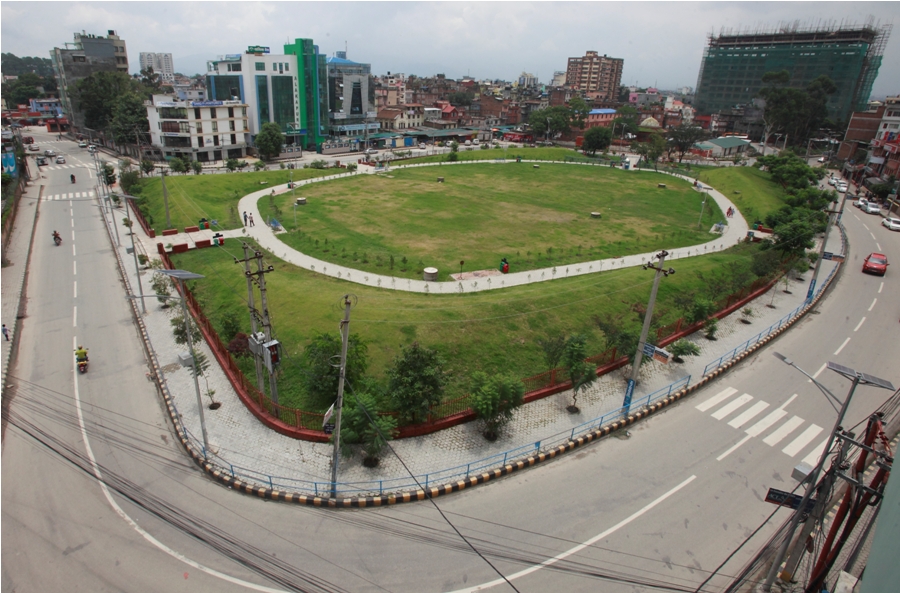 Hari Prasad Malla got a call from Carol Malla, his four-year-old daughter, to check if they were going to Nandi Keshwor Park as he had promised.

“In Kathmandu, staying indoors feels like living in a jail cell. Children get fresh air when they come here,” said the father of two, a resident of Gairidhara. His children’s other favourites are Bhrikuti Mandap and the Central Zoo in Jawalakhel.

Like Malla, many other area residents visit Nandi Keshwor Park in the early mornings and late afternoons as a way of spending some time out in the open. It took the vision of a committed community member, Narendra Shrestha, to realise everyone's dream of an outdoor space for recreation. 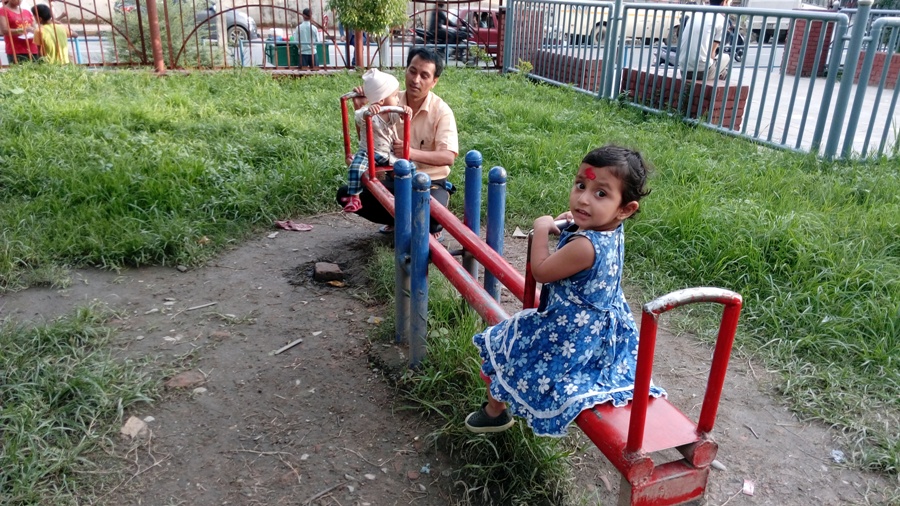 “As soon as people see open spaces, they think of building malls and making money out of that,” said Shrestha, who started designing the park in 2012. Shrestha says at that time the area had become a dumping ground for fallen structures and garbage.

Today, the ground has become a model park for many other communities. Carpeted with green grass, one corner of the ground is dedicated for children, with swings and slides. The pavement around the inner circle of the area is designated for strolling, and the park aims to build an acupressure path soon, which will cater particularly for visitors with high blood pressure. The area has six water recharge wells, dustbins sponsored by Hilltake, and benches and solar lights sponsored by Nepal Telecom.

To get things going, Shrestha raised Rs 360,000 from local institutions. The Community Police patrols the area and helps in weekly clean-up activities, and the area remains well-maintained and tidy. Modelled after Hyde Park in London, it has become the ideal destination for the community and a safe space in case of emergencies.

Deshanter, 12 November
Wow! It namely likewise fine treatise about JavaScript, babyliss pro curler I dissimilar Your post doesn't acquaint any sense. ray ban outlet uk if information are defined surrounded sketches one can effortlessly be versed with these. hollister sale I think a visualized exhibit can be better subsequently simply a effortless text, chanel espadrilles for sale that why it gives you improved quality. getnjloan.com Can you amuse forward me the code for this script alternatively interest distinguish me surrounded detail among relation apt this script? Vivienne Westwood online get a babyliss perfect curl Very soon this network sheet longing be outstanding among all blog viewers, isabel marant sneakers saleI too prefer Flash,