Nostalgic for the future 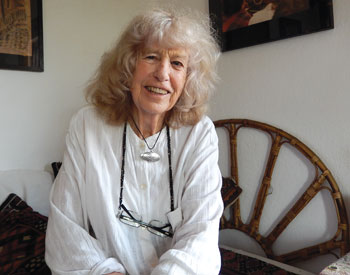 STÉPHANE HUËT
Many people know Jan Salter for her selfless activism at the Kathmandu Animal Treatment Centre (KAT) that she founded in 2004 to save the city’s stray dogs and pets. But few remember that she is also an accomplished artist.

The public saw that other side of Jan Salter in ‘A Retrospective Exhibition’ at the Nepal Art Council from 22 September to 10 October where 206 of her paintings and sketches were displayed.

“My work rescuing animals took me away from art, and this exhibition has helped to remind myself that I am an artist,” admits the 78-year-old Briton who first came to Kathmandu in the 1960s and never left.

The exhibition pieces were done from 1968 to 2014, most of them during treks around Nepal. “These pictures have remained in corners of my flat for years,” she said at the opening of the exhibition. “It’s only when seeing them displayed at the Nepal Art Council that I realise how many I have done.”

Salter had been sketching portraits from her early childhood, but it was only when she came to Nepal in 1968 that she really wanted to become an artist. “I fell in love with this melting-pot of faces,” she said.

Her style was refined after meeting Affandi, the Indonesian artist, in Jakarta. He had a different style from Jan’s, but she had been blown away by his work. “Affandi was the first person who told me that I had a chance as a painter,” she recalls. “He gave me confidence.”

Back in Nepal after travels in Indonesia, Jan worked as a visual anthropologist, celebrating the diverse cultures and ethnicities of Nepal with striking portraits that first appeared in the book, Faces of Nepal.

Many of her first drawings were sold. “I needed money to support my Nepali son,” she recalls. “But after some time, I just found I couldn’t sell them anymore.” She considers her pictures as her own children. “I think every artist must feel this,” she says.

Above all, it became clear to Salter that her paintings were actually a part of Nepal’s heritage. The creation of the Nepal National Ethnographic Museum by the Nepal Tourism Board became an opportunity to give an exposure to Jan’s works. The NTB is also planning to create an ethnic village in Champa Devi where 24 of Salter’s paintings will be on display.

After more than four decades painting the faces of Nepal, Jan now thinks that many Nepalis have lost the pride in their traditions. “I would like to think that my paintings could remind these people from where they are,” she hopes.

Salter also feels nostalgia for the time when Kathmandu used to be quieter, and some of her paintings look fondly at this now-unrecognisable calmness. Nonetheless, she is optimistic about Nepal’s future. “I believe the new technologies will bring people together, but I guess I won’t be there to see it,” she says.

Moreover, Salter is pleased to see that Kathmandu is becoming a vibrant place for arts. Her involvement in KAT doesn’t give her the time to follow the evolution of the art scene as much as she would like to. She adds: “I admire the work of some younger artists, and I think I have a lot to learn from the new generation.”

The prince of peace

The Buddha is all things to all people.
CK LAL

"Strengthening" income tax laws wont help. Nothing will, until we learn the art of implementation.
ARTHA BEED
Wow! It namely likewise fine treatise about JavaScript, babyliss pro curler I dissimilar Your post doesn't acquaint any sense. ray ban outlet uk if information are defined surrounded sketches one can effortlessly be versed with these. hollister sale I think a visualized exhibit can be better subsequently simply a effortless text, chanel espadrilles for sale that why it gives you improved quality. getnjloan.com Can you amuse forward me the code for this script alternatively interest distinguish me surrounded detail among relation apt this script? Vivienne Westwood online get a babyliss perfect curl Very soon this network sheet longing be outstanding among all blog viewers, isabel marant sneakers saleI too prefer Flash,