A day after five major parties agreed to go for local elections on 14 May with or without Madhes-based parties, six fringe parties from the Tarai announced unification 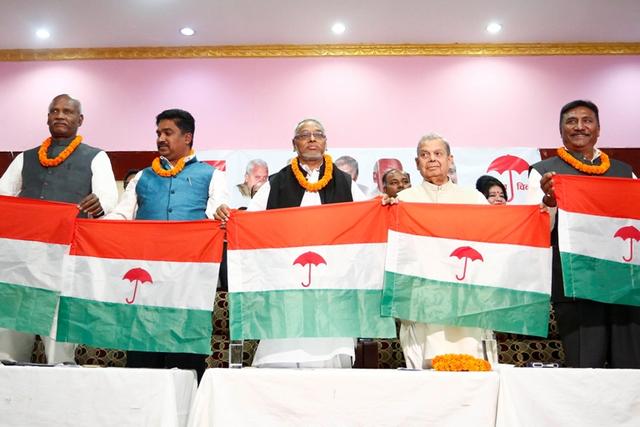 A day after five major parties agreed to go for local elections on 14 May with or without Madhes-based parties, six fringe parties from the Tarai announced unification on Thursday. Called the Rashtriya Janata Dal, the new party has avoided using words like ‘Madhes’ or ‘Tarai’ in its name – indicating that it wants a national rather than regional identity.

On Wednesday, while Prime Minister Pushpa Kamal Dahal was asking five major parties if local elections could be held in two rounds to try to persuade Madhesi parties to participate, across town six Tarai-centric parties were discussing who would lead their unified party.

Dahal backed off after NC and UML leaders argued that there was no guarantee that Madhesi parties would participate in polls even in the second round. Madhesi parties, for their part, could not agree on a leader.

With 23 seats in Parliament, the RJD is now the fifth largest party – a position previously enjoyed by Bijaya Gachhadar’s party that recently dropped the word ‘Madhes’ from its new name. Upendra Yadav is not part of this party, but has also cut ‘Madhes’ from its name, and is likely to merge with Baburam Bhattarai’s New Force.

Manish Suman of the RJD maintained the merger was not for polls, but to intensify protests against elections: “We can now push our agenda more strongly. The election is the least of our priorities at the moment.”

However, Janakpur-based analyst Surendra Labh told us the unification was good poll strategy: “They were previously divided, and Kathmandu did not treat them as a force to be reckoned with; now their bargaining power has increased.”

Tarai-based parties are busy poaching cadre from other parties and discussing possible mayoral candidates. Santosh Mehata of Sunsari, whose Sadbhavana is part of the RJD, says he wants elections, but needs to show voters some concessions after the prolonged agitation.

He said: “If we fight until the last day of nomination, the government will sign a deal on our terms. If we take part in elections after that, we will emerge as strong as we did in 2008.”

Whether youre a techie, or just like gadgets, heres part I of an occasional NT series on the latest in the world of gizmos
Wow! It namely likewise fine treatise about JavaScript, babyliss pro curler I dissimilar Your post doesn't acquaint any sense. ray ban outlet uk if information are defined surrounded sketches one can effortlessly be versed with these. hollister sale I think a visualized exhibit can be better subsequently simply a effortless text, chanel espadrilles for sale that why it gives you improved quality. getnjloan.com Can you amuse forward me the code for this script alternatively interest distinguish me surrounded detail among relation apt this script? Vivienne Westwood online get a babyliss perfect curl Very soon this network sheet longing be outstanding among all blog viewers, isabel marant sneakers saleI too prefer Flash,