Three months on, traumatised survivors struggle to come to terms with the deadly Bhote Kosi landslide

Three months after the massive landslide at Jure on the night of 2 August killed 145 people, blocked the Bhote Kosi and cut the Arniko Highway, relief operations have been reasonably effective but reconstruction and rehabilitation seem a long way off.

The blockage of the main road has been largely removed, but vehicles are obliged to take a perilous detour around the landlslide debris. Those living upstream have to walk several hours to reach the food distribution centre, and a few houses there still remain submerged.

The most affected were Mangka and Ramche VDCs, with Jure and parts of Tekanpur. Only 33 bodies were recovered, some could not be identified. Those who lost family members were provided Rs 40,000 as compensation and funeral expenses, and families whose property was destroyed got Rs 5,000 to help with re-construction. 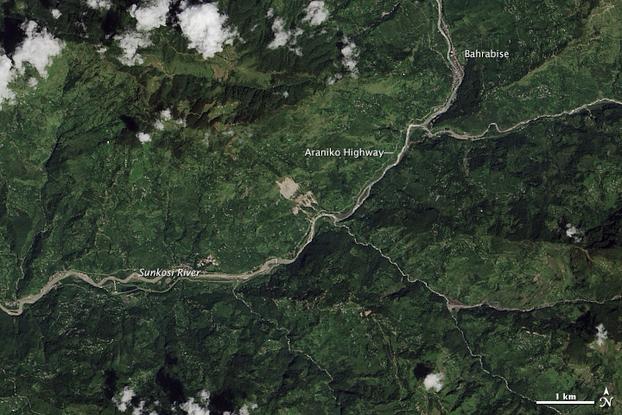 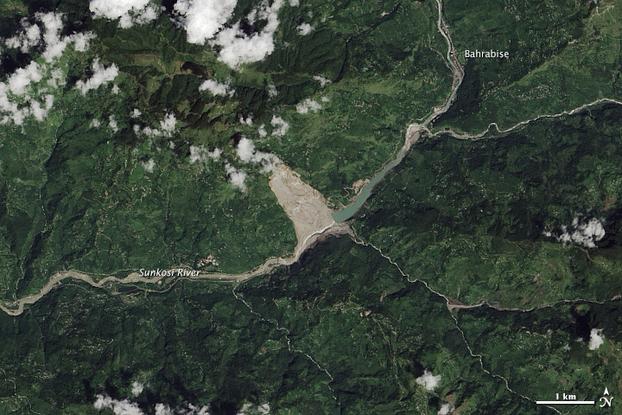 NASA
VISIBLE FROM SPACE: The Bhote Kosi landslide in an image taken in 13 September 2013 shows smaller precursor landslips, and one taken on 18 September 2014 shows the size of the slide and the impounded lake on the Bhote Kosi.
A 14-year-old boy we met, whose entire family had been killed, had received nothing apart from a basic allocation of food and clothing. The relief was coordinated by the CDO and LDO with help from the border security police. Rice (15 kg a month for those over 10 years), dal,vegetable oil and clothing had been handed out from the distribution centre. But many survivors (usually women) had to walk a considerable distance to receive their allocation.

The buildings of a former manganese factory were put to good use, and tents for a dozen or so families were set up in the grounds. A further 16 families were provided with tents which they took and set up themselves some two to three hours walk up at Kukudena, where some of them had land. Others found refuge with family and friends nearby, or rented accomodations in town. A British NGO had promised 31 shelter boxes for those still without accommodation.

Local officials and community-based groups of various kinds had been effectively mobilised, and were providing what support they could. A women’s cooperative of 120 members, 50 of whom had been affected by the landslide, seemed a promising source of future support.

While relief operations appear to have been reasonably effective in the short run, reconstruction and rehabilitation seem a long way off. With their fields and livestock largely destroyed, ripped off the hillside or buried under tons of rubble, a return to farming will be difficult for most of those affected. Some have relatives working outside the area and a few have been able to take up temporary work, but for the most part it will be difficult to rebuild livelihoods and anything like normal life for many months and even longer.

Cash donations amounting to Rs 20.4 million have accumulated, but remain largely unspent because there was no clear plan in this regard. Funds from UNICEF and other organisations have been effectively deployed in the construction of temporary accommodation for Bhan Sanghu Secondary School, but most were not even contemplating rebuilding their homes. It will be years before the shattered hillside will be available for use for livestock production, let alone agriculture.

Already, even those living in tents since the disaster occurred have started to drift away, as they have found sources of income or relatives who will help them and alternative accommodation. The campsite with a dozen tents at the manganese factory where 42 persons used to live now only has seven people.

The scar on the landscape will gradually heal and the river will resume its full flow, the roadside areas will see new construction and reconstruction. But those from the areas directly affected, who lost family members and neighbours as well as their livelihoods will find it much harder to recover.

Some –- like the man who had survived the landslide but spent three weeks in hospital recovering from his injuries and was now living alone in a tent -- may never really recover and will remain traumatised possibly for the rest of their lives. While many of those living nearby were sympathetic and generous towards those directly affected, no professional support or counselling is available. The psychological effects of the disaster were not even mentioned in our conversations.

A flood of floods

Contrary to popular belief, the CA members have actually done a lot of work. It's their leaders who are mostly to blame for the CA's failure

The metamorphosis of Bagmati
Wow! It namely likewise fine treatise about JavaScript, babyliss pro curler I dissimilar Your post doesn't acquaint any sense. ray ban outlet uk if information are defined surrounded sketches one can effortlessly be versed with these. hollister sale I think a visualized exhibit can be better subsequently simply a effortless text, chanel espadrilles for sale that why it gives you improved quality. getnjloan.com Can you amuse forward me the code for this script alternatively interest distinguish me surrounded detail among relation apt this script? Vivienne Westwood online get a babyliss perfect curl Very soon this network sheet longing be outstanding among all blog viewers, isabel marant sneakers saleI too prefer Flash,