Cloud with a dark lining

Nepalis have 24-hour electricity, but it has doubled our carbon footprint because of the import of thermal power 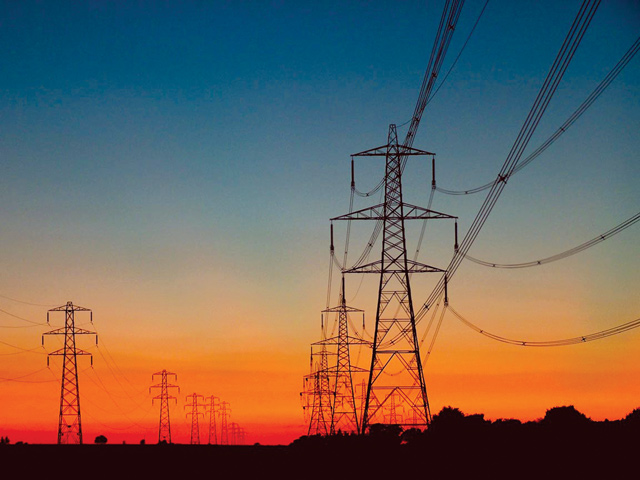 At the end of his turbulent three-year tenure as India’s ambassador to Nepal Ranjit Rae told editors at a farewell reception last week that New Delhi had not been given due recognition for ending load-shedding.

Rae reportedly rued that the new Managing Director of the Nepal Electricity Authority (NEA) Kulman Ghising was getting all the credit.

When one of the editors tweeted this, the outgoing Indian envoy was slammed on social media for implying that it was charity. ‘Nepal paying for the power,’ read one tweet.

However, it appears to be true that India has gone out of its way to offer help with transmission lines that had been delayed for years, so the power could be imported. One NEA source told Nepali Times that India has been unusually accommodating after Pushpa Kamal Dahal became Prime Minister in August last year.

Ghising would have had to reimpose power rationing if the 400 KV Dhalkebar-Muzaffarpur transmission line had not been completed in order to import power from India to meet this dry season’s shortfall.

NEA was therefore able to buy 400 MW from India, up from 250 MW last year. Once two more 132 KV cross-border lines (Kusaha-Kataiya and Raxaul-Parwanipur) are completed later this year, Nepal can import even more power from India if needed.

Power imports from India are temporary to tide over the current supply deficit, and the same transmission lines can in future be used to export Nepal’s surplus power to India. But for that Nepal would have to build several high dams to store monsoon water to generate sufficient electricity during the dry season to keep up with demand. 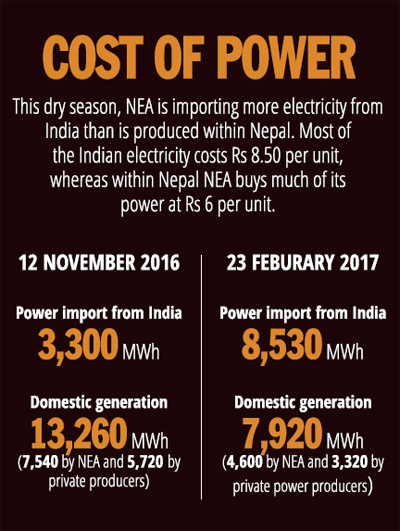 Some experts say that relying on India for electricity is a bad idea because besides being dependent on petroleum, Nepal is now also relying on power imports from India.

Former water resource minister Dipak Gyawali says Nepal should have learnt its lesson on being self-sufficient in energy after the Indian blockade last year, but it has not.

“I would have preferred to suffer from load-shedding rather than handing over the key to the main switch of our electricity supply to India,” he said.

Gyawali suggests three ways to get out of this trap: encourage Nepal’s independent power producers to generate more electricity, control leakage by expanding the network of community electricity users and switch to solar energy with reverse metering.

Till five months ago electricity supply from the mains may have been rationed, but at least we knew it was clean energy from hydropower.

Nepal now has 24-hour electricity, but half of that is from thermal power plants in India that burn dirty coal. Every time you switch on the lights, remember: Nepal’s carbon footprint just doubled.

“We know it is dirty thermal electricity, but we badly need it, otherwise we have to bring back load-shedding,” Hitendra Dev Shakya of NEA’s System Planning Division told Nepali Times.

Nepal’s annual per capita emission of carbon is 0.13 tons (the United States is 17 tons) but it is now going up significantly. Nepal’s moral high ground in climate negotiations is going to be much more muted.

Climate analyst Manjeet Dhakal says: “China argues that it has high carbon emissions because it is burning fossil fuels to manufacture products for the global market. India might use the same argument and claim that it is burning coal to supply electricity to Nepal.”

Dhakal says it is unfortunate that Nepal is importing dirty electricity from India when the world is moving to renewables. He adds: “Load-shedding was an opportunity for Nepal to switch to clean energy, but we wasted the chance and chose the easiest way out by importing dirty and expensive energy.”

It has been one long, hard struggle since April 1979
CK LAL

"I did the calculations, and took a calculated risk"

Tashi Sherpa returns to set up an international adventure gear manufacturing unit in Nepal
KUNDA DIXIT
Wow! It namely likewise fine treatise about JavaScript, babyliss pro curler I dissimilar Your post doesn't acquaint any sense. ray ban outlet uk if information are defined surrounded sketches one can effortlessly be versed with these. hollister sale I think a visualized exhibit can be better subsequently simply a effortless text, chanel espadrilles for sale that why it gives you improved quality. getnjloan.com Can you amuse forward me the code for this script alternatively interest distinguish me surrounded detail among relation apt this script? Vivienne Westwood online get a babyliss perfect curl Very soon this network sheet longing be outstanding among all blog viewers, isabel marant sneakers saleI too prefer Flash,