Miles to go, promises to keep

Although the investment climate has improved, Nepal has to do a lot more to entice FDI in infrastructure
Elvin L Shrestha 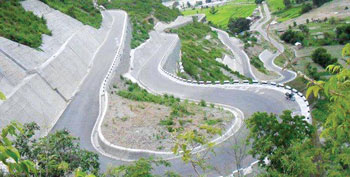 After making dramatic progress in health and education, Nepal will also be able to meet its self-imposed goal of attaining the status of a ‘developing country’ by 2022, but only if the government is serious about infrastructure-led growth.

The Infrastructure Summit held earlier this month highlighted the enormous need and investment potential for infrastructure development in tourism, energy, transportation and agriculture, among others. However, most participants which included government officials, bureaucrats and the private sector, cautioned that the investment climate needs to improve a lot for domestic and foreign private companies to want to put in money.

“If there is political backing, we can transform Nepal in five years,” said Binod Chaudhary of the Confederation of Nepalese Industries (CNI) that organised the Summit, “We’ve had enough of politics, it is time to move to infrastructure to accelerate economic growth, and there is a need to forge a strong partnership between the government and the private sector.”

Nepal’s planners have long realised that investment in infrastructure would immediately create jobs and reduce the need for Nepalis to migrate for work. And once completed, the infrastructure projects would lead to downstream benefits like energy self-sufficiency, redressing the trade balance through export of electricity, improving connectivity, increasing income from tourism, and upgrading agro-industries.

However, a decade of conflict, instability resulting from the prolonged transition and the lawlessness of the post-conflict period is still keeping investors away. Despite setting up the Investment Board Nepal, crucial decisions on infrastructure development are haphazard and ad hoc.

Investors seek cohesive and coordinated policies backed by transparent legal framework. “Policy reforms and confidence building measures from the government and the political class are needed to attract the private sectors investments,” says Hari Bhakta Shrestha of the CNI.

The National Planning Commission says it needs to invest as much as US$100 billion in the next few years to pave the way for Nepal’s 2022 goal. One of the main reasons many infrastructure projects like the plans for an international airport in Nijgadh, Bara and the Kathmandu-Tarai fast track road have long been stalled, is the lack of clarity in government policy on it, as much as lack of investment.

Existing foreign investors Nepali Times spoke to said that while the investment scenario looks like it may improve in the medium-term, they complain of major bureaucratic hassles on corruption in legitimate issues like dividend repatriation, tax refunds for raw-material imports, or the high-handedness of regulatory authorities.

“Word gets around about the kind of hurdles foreign investors here face in doing day-to-day business, and they think, why bother,” one foreign investor told us on condition of anonymity.

Perhaps the most emblematic indication of governance failure in infrastructure investment is the electricity shortage. Nepal today generates nearly 500 MW of electricity from captive gensets belonging to private individuals, offices, factories and businesses – representing half the grid capacity.

Lack of coordination between the Ministry of Energy, National Planning Commission, Nepal Electricity Authority, and Investment Board is largely to blame, but there is also local threats and extortion of power generation and transmission projects.

Land acquisition for infrastructure projects has always been a major hassle, and the lack of elected local leaders means hoodlums have made it a habit to harass and extort projects. It is worse when locals are backed by politicians, and the lack of clarity of the principle eminent domain in the absence of strong government has led to intractable disputes which have stalled some transmission and highway projects for years.

The NPC has forwarded a new Policy on Resettlement to the Cabinet that will hopefully expedite the process of land acquisition for infrastructure. The signing of a Power Trade Agreement (PTA) with India, and the Power Development Agreement (PDA) on the Upper Karnali and Arun hydropower projects have raised optimism for the country’s investment arena, especially in the energy sector. But the country is still in dire need of foreign investments. The government needs to make investment-friendly policies and needs to make an environment conducive to investments – one without unpredictable political turmoil, unsecure policies, or continuous obstructions from locals and political groups. “For creating an investment-friendly environment, political commitment is imperative,” wrote Radhesh Pant of the Investment Board in a daily last week.

The Infrastructure Summit listed some of the reasons for this: unfair political interference in projects, unreliable contractors who leave the project unfinished or don’t work on schedule, overly complicated permit systems and corruption. The current Public Procurement Act compels selection of contractors who quote the lowest price, even if the amount is unreasonably and impossibly low leading to absurd variation demands

Potentially viable partnership models, like PPPs, are not preferred because of the long and tedious approval process with ambiguous and inconsistent policies.

On the other hand, there is a lack of clarity in and duplication of jurisdiction. There is no coordination between government agencies and private companies, due to which there is confusion about policies, repetition of work and constant delays. The clash between the Ministry of Energy, CIAA and various parliamentary committees this month regarding cancellation of licenses for 10 hydropower projects, including the World Bank-funded 37 MW Kabeli project is not likely to encourage potential investors.

“The CIAA has become the most serious impediment to infrastructure projects,” one private Nepali investor told Nepali Times, “it is heavy-handed and acts like a parallel government, and government officials are so scared of being hauled up by the CIAA no one takes decisions anymore.”

Airports to be upgraded

Members to be added

We have to move beyond quick fixes to strategic restructuring of the state
DIPTA SHAH
Wow! It namely likewise fine treatise about JavaScript, babyliss pro curler I dissimilar Your post doesn't acquaint any sense. ray ban outlet uk if information are defined surrounded sketches one can effortlessly be versed with these. hollister sale I think a visualized exhibit can be better subsequently simply a effortless text, chanel espadrilles for sale that why it gives you improved quality. getnjloan.com Can you amuse forward me the code for this script alternatively interest distinguish me surrounded detail among relation apt this script? Vivienne Westwood online get a babyliss perfect curl Very soon this network sheet longing be outstanding among all blog viewers, isabel marant sneakers saleI too prefer Flash,