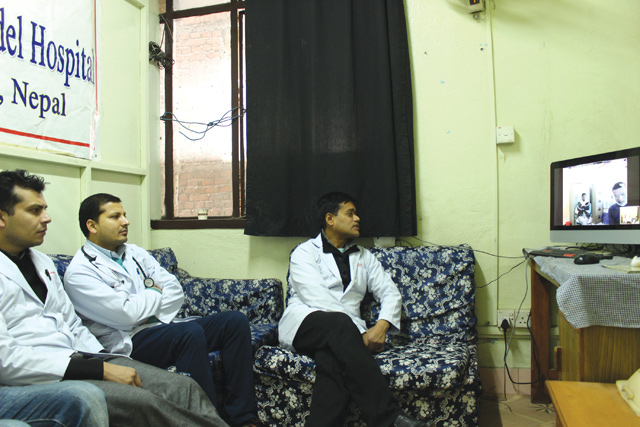 Sonia Awale
ON CAMERA: Surgeon Udaya Koirala (at right) with colleagues at Kathmandu Model Hospital consults with Health Assistant Tilak Chhantyal in Myagdi through Skype this week about a patient.

It is 9am at Kathmandu Model Hospital. But instead of donning his surgical gown and going into the operation theatre, surgeon Udaya Koirala enters a room with a large computer monitor for his regular Skype call to Shikha Health Post in Myagdi district, 250km away. Health Assistant Tilak Chhantyal comes online from Shikha through an intermittent video, and the two greet each other with “Namaskar”. There are two patients today: A man whose wife is pregnant because his vasectomy malfunctioned and needs to be re-sutured, and the other is a burn patient.

Koirala and his team examine the patients, and he suggests treatment. On other mornings, the cases have been much more life-threatening, but the spread of Internet connectivity is allowing many lives to be saved through telemedicine in a country where rural medical care is sparse.

“With real time video conferencing we are examining patients directly. We can see their condition and make a diagnosis,” Koirala says, adding that in most cases the patient doesn’t need to go to a city hospital and can be treated by the health assistant.

Indeed, the burn patient in Myagdi would have made the long journey to Pokhara or Kathmandu if Koirala hadn’t been able to examine him and prescribe treatment at the Health Post itself.

“He wasn’t confident about his recovery, and the health assistant was also unsure if the patient had to be sent to the city, but we found out that he didn’t need to. That is the great advantage of telemedicine,” Koirala explains. Then there are cases like a patient in Dolakha who was diagnosed with appendicitis, but once the surgeon opened him up found out that it was actually intussusception, a potentially fatal intertwining of the intestine.

“The surgeon called me from the operation theatre in Dolakha and I guided him through the procedure using real time video conferencing,” recalls Koirala.

Telemedicine has made it possible for the people in some of the remotest parts of Nepal to get specialist consultation and, in many cases, local treatment for emergency cases that may otherwise be fatal. Families have also been spared spending all their savings on taking patients to private hospitals in the city for treatment they don’t really need.

All this has been made possible by the spread of Internet connectivity: nearly half of Nepal’s population now has access to the Net, and this figure will increase as the mobile phone network grows. However, as evidenced in the Model Hospital consultation this week, the Skype connection was erratic because of low bandwidth in Myagdi.

“The slow Internet makes it difficult, but we have installed faster speeds in places where we consult regularly,” says Koirala. Kathmandu Model Hospital with support from Mahabir Pun’s Nepal Wireless and the Nepal Research and Education Network (NREN) started telemedicine ten years ago, and now conducts video conferencing in Myagdi and Gorkha. The government also provides telemedicine in 25 districts through Patan Hospital.

But despite more than a decade of proven experience, telemedicine hasn’t reached its full potential.

“In the beginning it was a fad with the appeal of new technology, and it fizzled out,” says Saroj Dhital, senior surgeon at Model Hospital who initiated the telemedicine program with Mahabir Pun.

Effective video conferencing needs bandwidth, but the areas of rural Nepal that need telemedicine the most are places without Internet. Mobile operators provide only 2G services in most rural areas, making phones too slow for downloading data and video.

“The main reason telemedicine has not spread is because of lack of connectivity or slow bandwidth,” says Bikash Gauchan who uses video conferencing consultations regularly for his mental health program at Bayalpata Hospital in Achham, where the group, Possible, has installed fast satellite Internet.

An increasing demand for psycho-social counselling prompted Bayalpata Hospital to design a new program last year in which local health workers deliver mental health care under the long-distance supervision of psychiatrists based in Kathmandu. Case details of patients are uploaded on Bayalpata’s Electronic Medical Record system based on which psychiatrists in Kathmandu advise primary health care workers in Achham every week.

Government is planning to extend its telemedicine services to 30 districts, even though it is not being used effectively in government hospitals where video conferencing tools have already been installed. Problems are poor maintenance and the inability of staff to use telemedicine for emergency procedures. This is proof that technology alone is never the solution. “Training is as important as equipment, software is more important than hardware,” says Koirala.

In the first-ever Telemedicine Conference held in September in Kathmandu by NREN, participants recgonised that real time video conferencing had proven its usefulness, but needed to be backstopped and up-scaled. Telemedicine lowers the cost of curative medical care, and is especially important as non-communicable diseases become more prevalent.

Says Saroj Dhital: “For a country like ours where people still have to walk for days to the nearest health post, telemedicine is of utmost importance. It is not the final solution, but it has great potential and will spread.”

Mahabir Pun (see below) is now working to set up the National Innovation Centre, and says: “Connectivity has to go hand-in-hand with political will.” 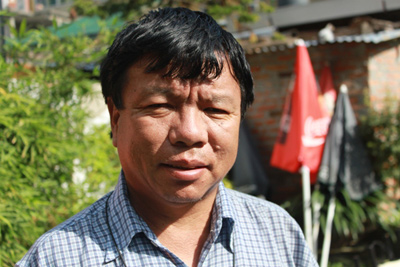 Broadband fibre optic cables now serve the main cities, so connectivity is not a problem. But in rural areas wifi is not reliable and bandwidth is slow, this is a bottleneck. But connectivity is not enough, you need motivated local health post staff. There is a ‘what can I get out of it’ mentality. Telemedicine works where the local Health Assistant is motivated, if he isn’t it doesn’t work.

Rural Nepal lacks adequate medical care for physical diseases, but when it comes to mental health treatment is almost non-existent.

Now, telemedicine hopes to bridge that gap. Counsellors at Bayalpata Hospital in Achham district in western Nepal are video conferencing with psychiatrists in faraway Kathmandu.

After 10 years of conflict, economic hardships, migration and discrimination are driving factors in what experts say is a rise in the incidence of mental disorders in Nepal. A staggering 37.5 per cent of the total population has some form of mental disorders, according to a recent WHO study.

In addition, there is considerable stigma and ostracisation of mental patients in Nepal and this is especially acute in conservative western Nepal. Despite the severe need, mental health care has always been neglected by both state and private health care providers.

Stigma makes it harder for patients to reach out for help and at the same time, Nepal has one of the lowest physiatrists-patient ratios in the world.

Nepal’s rural areas account for 30, 28 and 42 per cents of depression, anxiety and distress cases respectively. In Achham, where people have to walk for hours to reach nearest health post, Bayalpata Hospital has found the perfect solution in telemedicine. 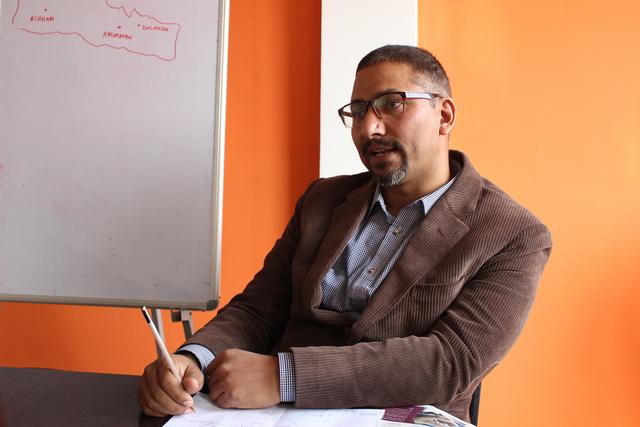 “We connected our mental health patients and our mid-level health workers in Achham with clinical care workers in Kathmandu,” explains SP Kalaunee of Possible that manages Bayalpata. “We have that expertise in Kathmandu, which we don’t in Achham. We just connect the dots.”

Under this program, mental health counsellors first screen patients. Based on the severity of the condition, the counsellor either provides necessary help or asks for professional advise via Skype from psychiatrists in Kathmandu.

Bayalpata Hospital uses an Electronic Health Record in which it uploads cases of record of their patients every week. These are then reviewed by psychiatrists in Kathmandu. Using real time video or audio conferencing, doctors based in Kathmandu consult local health care providers on each case, which they later follow up from the ground. There is also no problem of patients losing their health post visit card or their prescription as it will be electronically recorded.

“Each and every mental health case is referred to psychiatrists in Kathmandu,” says Bikash Gauchan, the chief physician at Bayalpata. “Because of telemedicine, even patients in remote places like Accham have been able to get psychiatrist service of specialist level.”

However, low bandwidth and connectivity remains to be the biggest obstacle in promoting telemedicine, which is why Possible has installed a satellite Internet at Bayalpata, which is too expensive for government hospitals.

Says Gauchan: “The government should provide broadband Internet in remote health posts. Once there is connectivity, telemedicine will progress and many more people will benefit.”

Possible is working with the Ministry of Health to install central server in Kathmandu and link them with other districts with which doctors in the capital will be able to see electronic health records of patients at any time.

“Going forward we are hoping to develop rigorous mental health program and district wide health care system under which we reach out to people in their household,” adds Kalaunee. “And develop our telemedicine consultation as a video satellite information system.”