Nepal’s chronic electricity shortage is a result of its inability to harness its big rivers, but how about small streams? 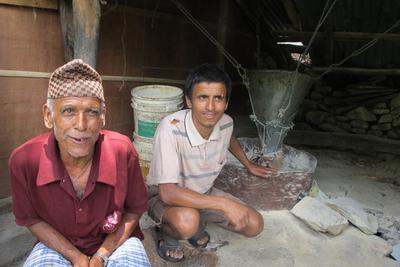 Kunda Dixit
FATHER TO SON: Karna Thapaliya and his youngest son upgraded the traditional water mill of their ancestors to generate 5kW of electricity to sell to 26 households in the neighbourhood.

Nepal’s chronic electricity shortage is a result of its inability to harness its big rivers, but how about small streams? There are tens of thousands of water mills across the country, and improving their efficiency by replacing crude wooden paddles with turbines is lighting up villages and providing power for micro-enterprises.

Karna Thapaliya’s ancestors set up a water mill by the banks of the Rosi River. Three years ago he upgraded it to generate 5kW of electricity that he sells to 26 households in the neighbourhood. The power is used for lighting at night, and by day Thapaliya sells his power to a furniture shop across the river.

“My grandfather and father raised the family with the flour they earned from grinding grain, now I sell electricity,” says Thapaliya, 71, whose sons work in Kathmandu and Qatar.

The improved water mill was made possible through a government subsidy scheme which is part of a nationwide campaign supported by the German agency, GIZ, and the Dutch SNV. The technology is perfect for remote areas, and is more sustainable than subsidies for solar installations. 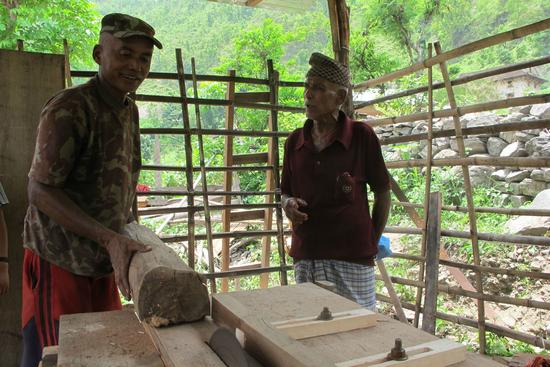 Krishna Shrestha (left) uses power generated by Karna Thapaliya's improved water mill to run a small furniture factory by the banks of the Rosi in Kavre.

“We are trying to upscale this program by getting private banks involved, and adding a productive end-use component to make it viable,” explains Ram Prasad Dhital of the Alternative Energy Promotion Centre (AEPC).“It is an appropriate renewable alternative, the only challenge is local management.” 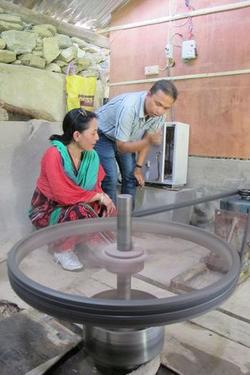 But in a country which has successful models of community-managed forests, women-led cooperatives and biogas programs, Nepal has experience in local mobilisation.

“We believe improved water mills can be a viable business that builds on a traditional vocation even though earnings for the bank are not attractive,” says Barsha Shrestha (right) of Clean Energy Bank, which wants to support up to 23 new projects.

In the Rosi River, households pay Rs 150 a month for six CFL lights and a tv, and the income pays for an operator. The savings are used for repairs and upkeep.

“We have the hardware, technology and a working model from the biogas program, all we need is to focus on financing and getting the community to work together,” says Saroj Rai of SNV.

Nearly 10,000 water mills across Nepal have been improved in the past 12 years, and here in Kavre 250 mills have been upgraded by the Centre for Renewable Technology Nepal (CRT/N) to provide electricity to 200 households.

A water mill can be made more efficient to double the rate of grain grinding for Rs 40,000. To generate electricity and install an oil expeller can cost up to Rs 300,000, for which subsidised loans are available.

(Hover over the infographic for the exact number of improved water mills built each year).

Taking power into their own hands, Sunir Pandey

Getting out of grinding poverty, Naresh Newar