Even compared to recent scandals in children’s homes, allegations of abuse at Bal Mandir are shocking
Sunir Pandey 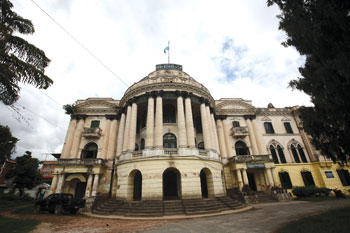 BIKRAM RAI
When Sarah Robinson first came to Nepal with her son and niece in 2009, she took time out from sightseeing to visit Bal Mandir in Naxal. At the squalid state-run orphanage, Sarah’s niece happened to pick up a five-year-old blind girl. Sarah, a special-needs teacher back in the UK, decided to adopt the child.

Two years later, Sarah was back in Kathmandu to begin the lengthy and difficult adoption process. Whenever she visited Bal Mandir, the girl’s caretakers would warn her saying the child had “bad karma”, but Sarah was determined to adopt the girl, whom she now called Hope.

One day Hope’s caretaker told Sarah she had spotted blood in the child’s underwear. Both assumed it was diarrhoea. But after examination, doctors at the TU Teaching Hospital said Hope had been raped. When they questioned her, Hope told them she and “Rabin uncle” loved each other.

Rabin Shrestha was in charge of adoptions when Sarah applied for papers for Hope. “I tried to adopt her, but Shrestha told me I couldn’t do that. He wanted me to sponsor her instead and told me I would get a decision after she turned 16,” Sarah told Nepali Times.

It had already crossed the 35-day statute of limitation on rape when Sarah finally filed a case against Shrestha (she was afraid he could deny her Hope if she accused him) so she only filed an FIR with police on grounds of sexual abuse. Shrestha was issued a warning in 2012, but not arrested.

On 16 June, Rabin Shrestha, now an ex-employee since a year and a half, and Rabin Chalise, an ex-student who ran a youth club at the shelter, were arrested by the Central Investigation Bureau (CIB) again after child rights activists presented new evidence of repeated rape and abuse of other girls and boys at the orphanage.

According to the testimony of three autistic girls, the men would introduce themselves to the children as Bollywood film stars Amitabh and Abhisek Bachchan and would lure them into drinking alcohol and watching pornography before abusing them, the latest incident occured three days before their arrest.

They would organise ‘wedding ceremonies’ every Saturday and dress the girls in red saris and have them dance to brass-band wedding music. One of them would spray water on the girls, who would then be forced to take off their wet clothes. This occurred during the afternoons, when Shrestha got a free pass at the orphanage. In the evenings, Shrestha used to take the children to a bar in Thamel where they were groomed to be prostitutes, according to children’s accounts.

These detailed testimonies were presented to the CIB by child rights activists from ACR-Int (Action for Child Rights International). The evidence was cross-checked for veracity, and was so compelling that Shrestha and Chalise were arrested right away, while a third man was questioned but couldn’t be detained because of lack of evidence.

Lawyer Sapana Pradhan Malla, who is fighting Sarah’s case, says this new evidence might help them get the Supreme Court to order the police to register and file a rape case against Shrestha. They have also listed five other pleas: amendment to the 35-day limit, a mandamus order to not dismiss the case, to teach children about sexual abuse, to set up a child-abuse monitoring system at Bal Mandir and for the Central Children’s Welfare Board to come up with a manual for regulation. A hearing scheduled for 3 July at the SC was again postponed to 3 December.

Shrestha and Chalise, both right now in police custody, have denied the allegations against them. We asked Subash Kumar Pokharel, General Secretary of Bal Mandir, how an ex-employee could go in and out of Bal Mandir, but he was evasive.

Instead, he accused ACR-International of using Bal Mandir’s children against the institution that protected them. Some Bal Mandir alumni also protested outside the office of ACR-I in Kuleswor on Wednesday accusing activists of using the case for fund-raising.

“Since the police are investigating this case, I don’t want to say anything and influence their decisions. But we have written to them that we will fully cooperate with the investigation,” Pokharel told us.

The CIB refused to comment because it said investigations were ongoing. It has until 10 July to file a case, after which Shrestha and Chalise will have to be released.

Names of Sarah and Hope have been changed for safety and privacy reasons.

Established in 1964 to take care of orphans and abandoned children, Bal Mandir was a powerful institution with royal patronage. With Queen Ratna at the helm, it put together buildings and 50 ropanis of property which are now prime real estate.

Administered by the quasi-NGO, Nepal Children’s Organisation (NCO), Bal Mandirs across the country today take care of over 600 children in 11 homes. Since the loss of its royal backing, the NCO has been plagued by political interference and corruption. Its buildings and property have been leased out to private individuals, amidst allegations of huge kickbacks to political appointees in the NCO.

In 2011, the Public Accounts Committee of the legislature parliament ordered the NCO to systematise its lease process. Seeing the conditions at Bal Mandir, the Australian charity Mitrataa Foundation agreed to manage the orphanages for five years in 2009, but pulled out within 12 months because of widespread corruption and mismanagement at the NCO.

‘We had to cancel the project as we were not confident that we would be able to deliver on the objectives without risking Mitrataa’s reputation as an organisation that refuses to pay bribes,’ the charity says in an online post. One former Bal Mandir employee says the shelter has been involved in “selling babies” in the guise of adoptions, with its managers taking a cut.

When allegations of child trafficking made international headlines, the government suspended inter-country adoptions in 2007 before lifting the self-imposed ban in 2009. In February 2010, the Hague Conference on Private International Law, released a report saying Nepal’s adoption system had gross irregularities and fell short of Hague Convention standards. Among other recommendations, the report advised better regulations of children’s homes and elimination of ‘financial gain from inter-country adoption’. Eleven countries including the US and UK then banned adoptions from Nepal.

The NCO’s Subash Kumar Pokharel denies all allegations of corruption and abuse. He says: “There is no other orphanage in Nepal better run than Bal Mandir. If any one finds proof of corruption or abuse, I will resign.”

At the mercy of mercenaries, Trishna Rana

Nepal, 29 August
Wow! It namely likewise fine treatise about JavaScript, babyliss pro curler I dissimilar Your post doesn't acquaint any sense. ray ban outlet uk if information are defined surrounded sketches one can effortlessly be versed with these. hollister sale I think a visualized exhibit can be better subsequently simply a effortless text, chanel espadrilles for sale that why it gives you improved quality. getnjloan.com Can you amuse forward me the code for this script alternatively interest distinguish me surrounded detail among relation apt this script? Vivienne Westwood online get a babyliss perfect curl Very soon this network sheet longing be outstanding among all blog viewers, isabel marant sneakers saleI too prefer Flash,