Preying on the predator

The leopard beaten to death last month wasn’t a casualty of human-animal conflict, it was a casualty of our intolerance and barbaric nature
Priya Joshi 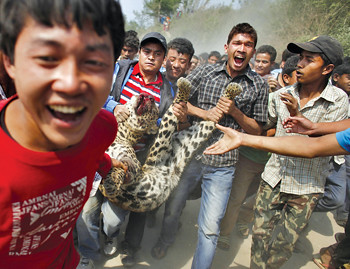 NIRANJAN SHRESTHA/AP
A leopard wandered into the golf course near the airport one morning last December. It preyed on the guard dog and livestock and had the entire neighbourhood terrified. When asked for help, the Department of National Parks and Wildlife Conservation and District Forest Office were infuriatingly nonchalant in their response and said the wild animal “wasn’t really a threat”. Four months later in April, the leopard was ruthlessly beaten to death by locals of Gothatar and paraded around town like a trophy (pic, right).

As human encroachment into wildlife habitats continues to grow, man-leopard encounters are becoming increasingly common in Kathmandu. Driven out due to competition or dwindling prey, this leopard, like its ancestors, probably used the green trail along the Bagmati to foray into the city in search of easy livestock who have long lost their protective instincts.

Numerous leopard sightings and rescue efforts are made in the Valley every year. But many encounters result in tragedy for the wild cats because we don’t have a proper rapid response system. Although the Central Zoo in Kathmandu has a darting team, by the time the bureaucratic channels give it the go-ahead, it is often too late for the animals to be rescued.

However, what made last month’s incident stand out were the gruesome photographs and videos of the leopard being circled, trapped, taunted, and attacked until it retaliated like any other trapped animal would. The photos allowed the animal to have a ‘face’, a beautiful, terrifying face, and showed us that it wasn’t just a casualty of human-animal conflict. It was a casualty of our primitive, barbaric nature that we boast to have evolved out of.

Throughout history, humans have shown intolerance towards other animals whom we deem as competition or threats. Predators such as wolves have been wiped out from large parts of the world, including Nepal, because of this. Perhaps this fear and the rush of adrenaline are what caused the mob to gang up against this lone creature last month. Perhaps they killed it out of fear, but perhaps also out of pent up frustration and this lone leopard became an easy target. Maybe a primitive part of them resurfaced; a part that has been lulled by years of complacent living in the capital.

The images sent ripples far beyond the Valley and perhaps the outside world is looking disdainfully at us, the same way Kathmandu folks look disdainfully at the people living in buffer zones and conservation areas after they have killed a leopard for killing their livestock. We conservationists in Kathmandu write articles, give trainings, and try to ‘educate’ people living near or within protected areas about the importance of conservation. We want them to put aside their fear and hatred towards an animal that has just wiped out their crops or their livestock and instead help in its protection, often without compensation. The people living in and around protected zones are now aware about the whys and hows of conservation.

Perhaps now it’s time for those of us in Kathmandu to practice what we preach. We need to educate the ‘educated’ and give awareness trainings in cities and towns so that the next time there is a leopard, fox, jackal, jungle cat or a snake in our midst, we do not attack it, but stay calm, call the rescue team, and assist in its rescue. In case of encounters with wildlife around the Valley, call the District Forest Office: (01)4444948.

Priya Joshi is a wildlife researcher. She currently works with the Centre for Molecular Dynamics Nepal conducting wildlife genetic research in Asia.

Photos of the leopard being killed

After a week of brinkmanship, we near a deal
PRASHANT JHA

Letter to the editor, Kantipur, 27 February
Wow! It namely likewise fine treatise about JavaScript, babyliss pro curler I dissimilar Your post doesn't acquaint any sense. ray ban outlet uk if information are defined surrounded sketches one can effortlessly be versed with these. hollister sale I think a visualized exhibit can be better subsequently simply a effortless text, chanel espadrilles for sale that why it gives you improved quality. getnjloan.com Can you amuse forward me the code for this script alternatively interest distinguish me surrounded detail among relation apt this script? Vivienne Westwood online get a babyliss perfect curl Very soon this network sheet longing be outstanding among all blog viewers, isabel marant sneakers saleI too prefer Flash,