Every evening, Mahesh is free to be Manisha, her true self 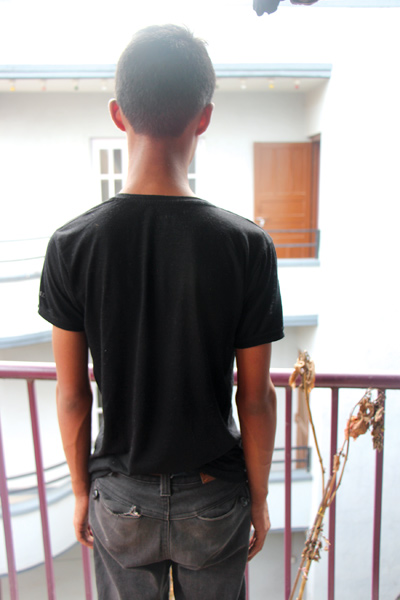 “It is really expensive being a girl,” says Manisha with a smile, referring to her new make-up, high-heels, wigs and dresses. It has been three weeks since she came out as a woman, but she has not yet mustered the courage to confront her family and friends. During the day, she is Mahesh, a shopkeeper and a dutiful son. At night she is Manisha, the version of herself she is most comfortable with.

Muna, who was helping Manisha with her make-up one evening last week, also leads a dual life. It’s more complicated for her because she shares an apartment with her family. Her nights out as Muna involve elaborate planning, excuses and even lies.

That evening, she decided to stay home and be a dutiful brother to appease her elder brother and his wife. She did not say much, instead she handed over a note explaining how it was not her choice but nature that put her in a man’s body. She did not regret being different, but hated being called names and was scared of coming out to her family.

Muna and Manisha were in Rolly’s apartment. They refer to Rolly as “Mom” because she helped them break into the network. “You cannot randomly show up out of nowhere as a queen,” Manisha explains,“other queens can be pretty territorial and aggressive. But when you show up as the daughter of one of the queens, they are more accepting and let you be one of them.” 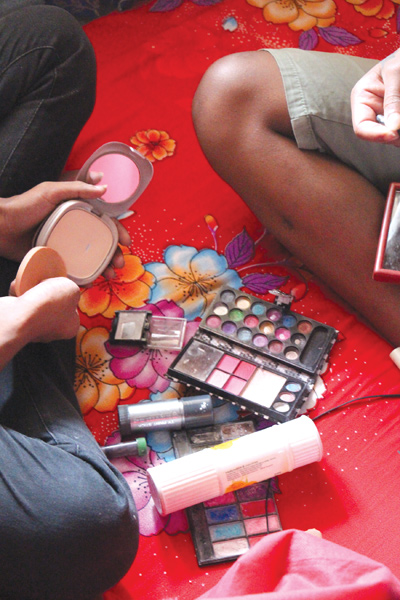 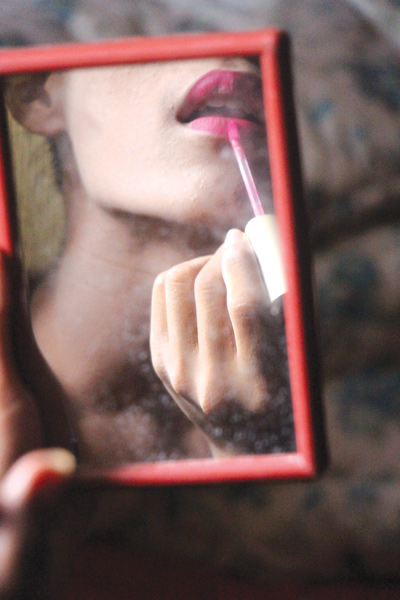 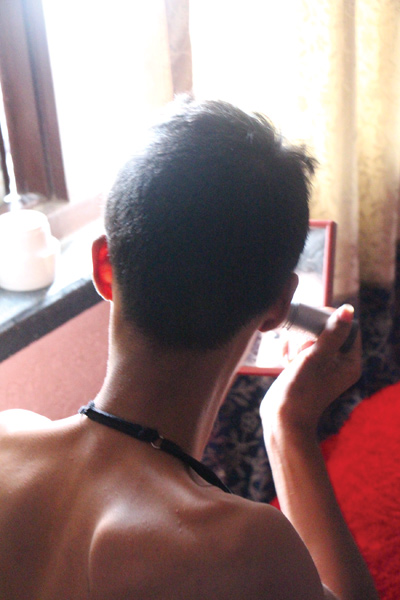 Rolly has nine 'daughters' after coming out last year, and Manisha thinks that is because she is very warm and knows how to make the newbies feel comfortable in their own skin. She says, “Transitions can be extremely frightening initially, but Rolly knows exactly how to handle that fear and reluctance.”

Rolly seemed comfortable talking about her life. She grew up as Ramesh in Chitwan, and always knew she was different. “I did not know why I felt like a girl, but I found support online by connecting with many people like myself through a fake Facebook account,” she confided.

One such friend was from her village; they decided to meet. To Rolly’s surprise, the person she had been chatting with was her friend Bikram (now Nirja). From the walks around their village in Chitwan as Bikram and Ramesh, to their scooty rides on the streets of Kathmandu as Nirja and Rolly, they have supported each other ever since.

Across town in another apartment, Nirja’s dual life is much simpler; she does not have to change to Bikram every day. She just maintains a façade of masculinity when she needs to visit her family in Chitwan a few times a year. For the rest of the time, she is Nirja, has taken part in beauty contests and is comfortable with being photographed. 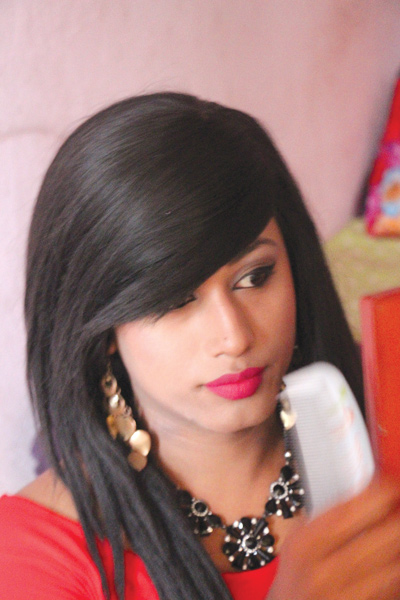 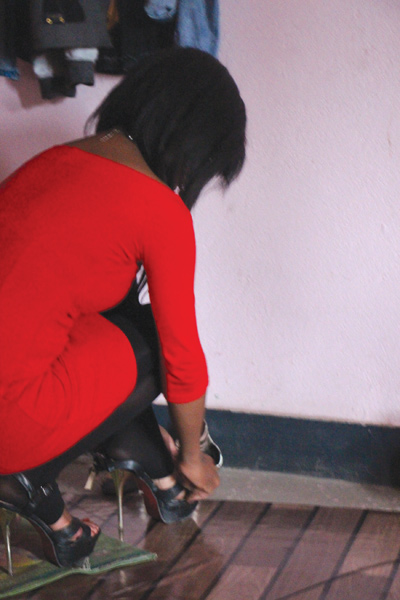 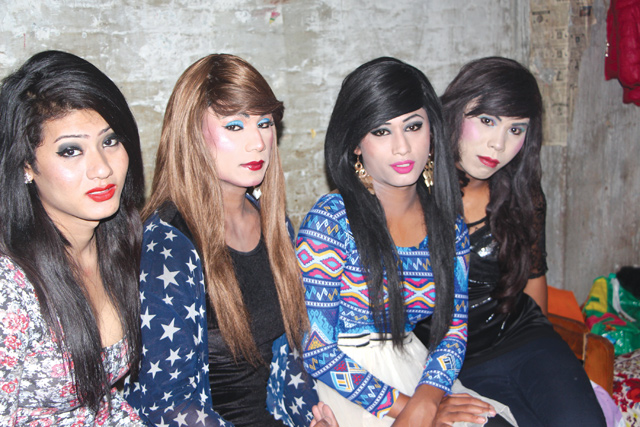 “More awareness about our situation through the media could potentially make it easier for us to come out to our parents”, says Nirja, gluing on fake eyelashes.

Manu, on the other hand, dresses as a woman only a couple of nights a month. The rest of the time she is Bikash, a college student in a boy’s hostel. She has homework and tests to keep her busy, her other life is a secret. “I am the only son in the family which makes it more difficult to tell my parents. I hope to come out when I finish my studies and become financially independent,” says Manu. “Maybe once I earn a livelihood and fulfil my duties as a son, my parents will be more willing to accept me", she adds.

Manisha, Muna, Nirja, Rolly and Manu say they have to be thick- skinned to be queens. “People harass us. The police, the drunks, the drug-addicts chase us, call us names and treat us like animals, many fear us,” says Muna. Despite all this, they are relieved to be 'out', even partially. They wait for the day when they can transition fully.

Sharmila does not need to lead a dual life, she has come out completely. “It was not easy, people still talk; call me names,” she says, “but my Mom has finally come around and I feel very lucky.” She has a tattoo with her birth name ‘Shankhar Chowdhury’ on her hand, which reminds her constantly of her past life. “I can erase it but doing so costs Rs.18,000, so I don’t bother,” Sharmila laughs.

Sharmila’s family tried everything to ‘heal’ her after they found out. They introduced her to girls to get her married off, even took her to a witch doctor, but nothing worked. She hated playing with her brothers, and felt shy around her guy friends. She preferred helping her mother out in the kitchen and yearned to wear kurtas.

“I always felt something was terribly wrong with me. Why could I not be normal like my brothers? Why did I feel like I was trapped in the wrong body? I did not know anything about transgenders,” she reveals.

She used to work at a bank, and finally met someone like her who took her to the Blue Diamond Society (BDS) where she learned that there was nothing wrong with her.

Sharmila is now the second wife of a taxi driver, and proudly displays two framed pictures of her wedding. “Every girl dreams of having a wedding and I did too,” she says, “I was so thrilled when he asked to marry me. We got married at Gujeshwori temple, all our friends came.”

Sharmila is happy and comfortable now, but is uncertain about the future. She says, “I will most likely run a small shop and continue to take care of my nephews whose parents passed away. I have to constantly remind the boys to call me aunty but they just won’t listen.”

What is in the constitution 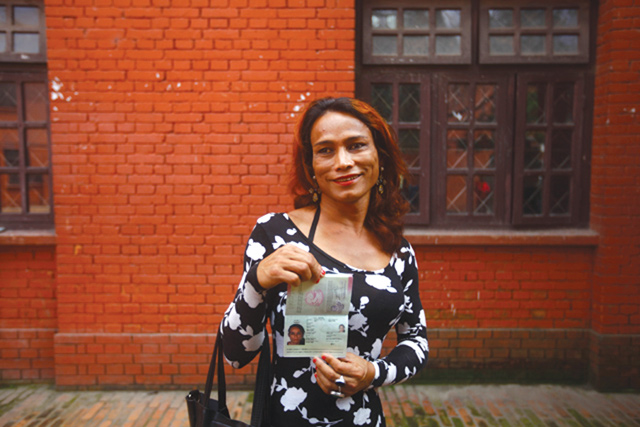 The rights of Nepali citizens to choose their gender identity on citizenship and passports -- male, female or other -- is enshrined in Article 21 of the Constitution. The Department of Passports has already issued its first passport under the “O” category to Monica Shahi, 37 (pictured), a transgender activist.

Transgender activists have applauded the government’s efforts to protect the rights of sexual minorities, but they say implementation is slack.

“Many LGBTIs are facing obstacles in obtaining citizenship despite provisions in the Constitution because local-level government officials are unaware of it,” says Gurung. “The government should circulate the necessary information to all government offices.”

Bisexual: An individual who is attracted to persons of the same or opposite sex.

"Who brought the nation to its present condition?"

Translated excerpts of the hard-hitting speech delivered by Chief of Army Staff, Prajwalla SJB Rana, at the convocation of the command and staff training at the Tokha on Wednesday.

Free to be miserable

Nearly a year after being unbonded, kamaiyas find freedom is just another word.

Someone I can talk to...

What are the things that bother Nepali teenagers? Who do they talk to about their innermost concerns? To whom do Nepali adolescents turn to when they want to learn about sex? Is the information they get correct and useful?
HEMLATA RAI

Narahari Acharya
Rajdhani, 10 October
Wow! It namely likewise fine treatise about JavaScript, babyliss pro curler I dissimilar Your post doesn't acquaint any sense. ray ban outlet uk if information are defined surrounded sketches one can effortlessly be versed with these. hollister sale I think a visualized exhibit can be better subsequently simply a effortless text, chanel espadrilles for sale that why it gives you improved quality. getnjloan.com Can you amuse forward me the code for this script alternatively interest distinguish me surrounded detail among relation apt this script? Vivienne Westwood online get a babyliss perfect curl Very soon this network sheet longing be outstanding among all blog viewers, isabel marant sneakers saleI too prefer Flash,